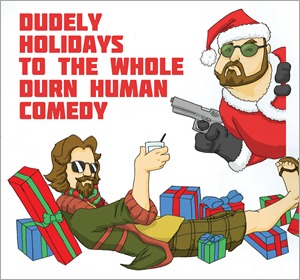 Seems like most Dudeists (for now, anyway) were raised in some sort of traditional monotheistic-Judeo-Christian-what-have-you type of family. Some of us ascribe to both Dudeism and some flavor of monotheism, but there are quite a few of us (myself included) who have drifted away from organized religion. We’re not alone: The crowd of unaffiliateds is about 15% in the US of A at present and rising.

I’m an admirer of Jesus. The dude knew what he was talking about. I’m down with ideas like not hitting the other kids, sharing, and above all, bringing snacks and booze to the party. But I don’t believe in the religious concept of sins, let alone the idea that somebody needs to die for mine. Not that I begrudge others who take comfort in believing in a savior in the least. I may not go in for conventional religion, but I can dig the parts of it that ring true for me. 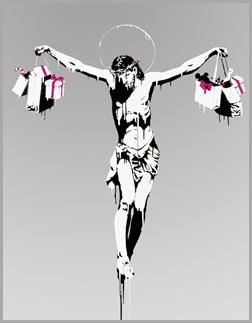 Saying stuff like this outright during the Christmas season can shock people. Everybody’s thinking it, but we haven’t yet gotten comfortable saying it. But you shouldn’t feel guilty if you like to celebrate Christmas but don’t really dig the whole Christianity thing.

Winter holidays predate Christianity by millennia, and even Christmas itself is a bizarre amalgamation of pagan tradition. Reactionaries who claim that phrases like "Happy Holidays" are ruining Christmas are overlooking the fact that Christmas got wrecked a long time ago. Way before the rise of agnosticism/atheism/don’t careism corporate America had sucked all the "true meaning" out of Christmas and exploited it by peddling false sentimentality for every penny possible. Christmas stopped being the second most important day on the Christian liturgical calendar (remember Easter, you know, the 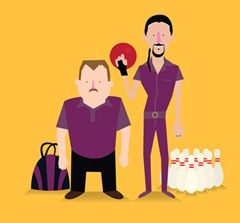 real main event?) Thanks to the rise of big companies in the 19th century, Christmas was forced to being the biggest holiday of the year by clever people who realized they could exploit a custom to make a lot of money.

And they were good at it. People have all kinds of warm fuzzy feelings for schlock like Miracle of 34th Street, which is nothing but a feature-length commercial for a department store. St. Nicholas is no longer the patron saint of children; he’s the patron saint of the mall. Nothing epitomizes what commercial culture has done to Christianity quite as well as Home Alone, which shows us what the holiday has been mutilated into: family members screaming at each other and while guys kick each other in the balls. 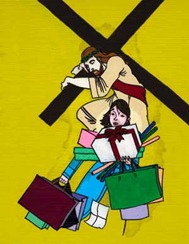 So now that us secular Dudeists no longer have to feel guilty for "taking the meaning out of Christmas" we can just kick back and enjoy it. There’s so much awesome stuff that can really help you with the whole Zen thing during the long, cold winter months. The winter holidays should be the most Dudely time of the year. Can you think of anything more Dudely than sitting with your feet up by the fire with your friends, takin’ er easy with an egg nog White Russian? Can you think of anything less Dudely than pepper-spraying people at a Wal-Mart so you can get your hands on that last Xbox on the shelf? 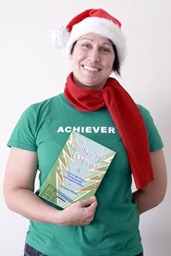 The funny thing is, by rejecting all the Holiday norms that most practicing Christians stress themselves out over, I think I might be enjoying the Christmas season in a way that Jesus might actually have approved of.

Each year, instead of going and buying more plastic crap at the big box store, I reuse a small collection of hand-me-down decorations I got from my mom when I left for college. Each year I pick a different charity and encourage people to make donations rather than buy me even more crap that I don’t need and don’t have space for. It’s really, really hard to get people to do this. The standard response I get is "but making a donation in your name isn’t a real gift." Uhh, actually it is. Jesus liked to give people free food, healthcare, and education. I don’t recall any scenes in the New Testament where he got all 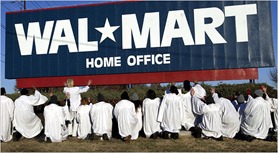 of his disciples a really groovy 12-speed blender. But somehow believers and non-believers everywhere have been duped into believing that they must buy shit even though deep down they know better.

The paradox of believers sincerely wanting to celebrate Christmas properly but keep doing it wrong was summed up for me the other day when I was in a store and saw a pile of mass-produced  tin plates that read in faux-rustic lettering "Keep the Christ in Christmas." I dunno if a dude who rejected materialism and ostentatious shows of false piety would really appreciate people selling his birthday with that kind of shit. 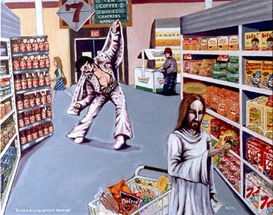 So whether you’re a traditional church-going type, a full-blown atheist, or a fuck-it-let’s-go-bowling type, one thing I think we can all do is keep the Dude in the holiday season. Don’t let yourself get caught up in the hustle, stress and credit card debt that totally sucks the life out of a holiday that started with a little family and their neighbors throwing a baby shower. Keep it simple. Enjoy the little things. And don’t forget to remind others to, "have a happy holiday what-have-you, dude."