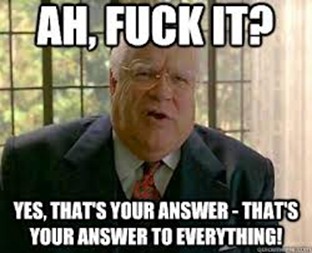 Fuck. To fuck or not to fuck? Fucked, Fucking, Fucker, Fuck-me, Fuck-you, and ah just fuck-it. It’s one of the most perfunctory words in the English language and its masterful use in the movie The Big Lebowski has a lot to inform the Dudeist way of life. “Fuck it” is as important a mantra to the Dudeist as “aum” is to the Hindus, “amen” is to the followers of the Jesus dude and “garr” is to the pirate-loving Pastafarians.

The word “fuck” in its own simplicity has many connotative meanings all in the tone and inflection of the user much like the word Dude itself. 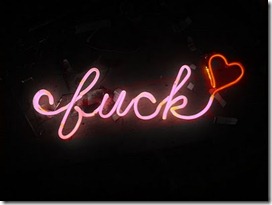 Inflection can communicate vastly different meanings. For example, you see a special lady: “Fuuuckkkk”; you lost a lot of money: “Fuuuuuck!”; you find yourself in a scary predicament: “Fu-u-u-ck!”; you stub your toe: “FUCK!!!” and so on. Then of course there’s grammar. Used in various syntaxes, “fuck” can mean almost anything: “I’m fucked,” “You’re fucking kidding me,” “Well fuck me!” “What the fuck?” and my all-time favorite “Ah fuck it!” The word “fuck” can be used as a verb, adverb, adjective, imperative, interjection, and noun as in “anatomical act of copulation.” Without which, of course we wouldn’t be here to ruminate on the word in the first place. 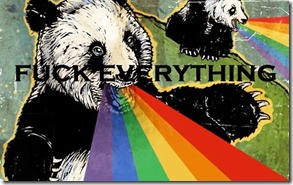 Of all of the English words that begin with the letter F, it is the single one referred to as the F-word. That’s a pretty privileged position. How many other words can co-opt the nomenclature of an entire letter?

The etymology of the word fuck turns out to be quite fucking interesting. The truth is nobody really knows for fucking sure where the fuck fuck came from.

Legend has it that its origin was from ancient England where a person could not have sex unless you received consent of the King (unless you were a Royal yourself, of course – they c 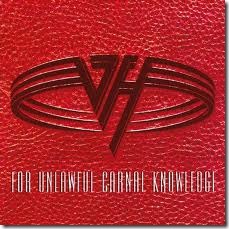 ould fuck anyone, in every sense of the word). When anyone wanted to have a baby, for instance, they had to get an okay from the King. The King would give them a placard, that they hung on their door while they were having sex. The placard had F.U.C.K. on it. (Fornication Under Consent of the King) Another explanation for its origin contends the word fuck comes from colonial times when someone would be punished for prostitution. It was an acronym for the words “For Unlawful Carnal Knowledge.” This of course is why Van Halen gave one of their albums that unusual title.

Research indicates the word was found in earlest times in many languages, such as German ficken (to fuck), Dutch fokken (to breed, to strike, to beget), dialectal Norwegian fukka (to copulate), and dialectal Swedish fokka (to strike, to copulate) and fock (penis). 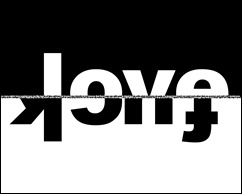 Though it has a long and cherished history, the word “fuck” has never been so celebrated as it has in The Big Lebowski. It’s hard to believe, but even with 260 uses of the word “Fuck” it does not top the list of instances of the word in a film. According to Wikipedia it’s 26th on the list. On that list were some of my favorite films: Casino boasted 422 “fucks”, Pulp Fiction 271, Goodfellas 246, and Scarface 208. Yet from what I saw on that list, The Big Lebowski seemed to offer the most positive uses of the word. I believe it has single handedly brought the word "Fuck" from the dark side to show that it can be a perfectly acceptable word to use in common parlance. 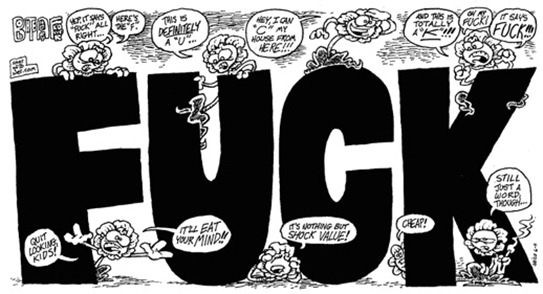 Within the context of living the Dudeist lifestyle and following the precepts of the religion of Dudeism there is an absolute respect for the use of the word in expressing the pleasure of releasing that inner angst that arises when we are pressed with shit that tries its best to bring us down or make us feel inadequate. Fuck, I really feel for the group of uptight A-holes who can’t use this expression to release themselves from the stress of outside expectations. These people often find themselves with no way out but to look at non-performance as failure.

One man’s fucking up and sense of failure is another Dude’s just saying “fuck it” with a different sense of success, or at least equanimity. Happy is the Dude that can say "fuck it" no matter what marmots are thrown in his bath or gutterballs he throws down the lane. "Strikes and gutters, ups and downs,” as the feller said.

Let’s face it: life’s expectations have caused all lot of bad shit to go down for a lot of people thru the millennia. You might note that in the song “Imagine” all of the ideas that John Lennon wrote about which would make the world a better place could be looked at as principled abandoning of expectations. Didn’t I hear Dudeism evoked in the line “Imagine all the people saying fuck it, man. Imagine no aggressions, and the world will abide as one”? Well a bit paraphrased, but that could feasibly have been an alternate take.

Living the life of "Fuck it" doesn’t mean of course you can’t be excellent at what you do. It just means when you fuck up you don’t get uptight and make life shitty for those around you or yourself. Fuck it , man. What’s the point of living if you’re constantly fretting about failures, past, present or future? Just move on to the next moment and try to get it right. If you don’t, then let out all the tension with a hearty “Fuck it.”

A Duder feller than myself once said, “Can’t be worried about that shit, life goes on, man.” That’s as good a definition of “fuck” as I can think of. “Fuck” helps make life go on.

Previous Post: No Frame of Reference #21: The Dude and the Zen Master
Next Post: In Plain Sight: Dude is Everywhere