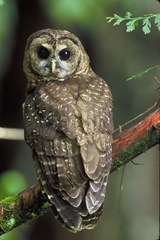 The Spotted Owl (A True Dude)

Birds on the whole, as a group of animals, are way too quick, spastic and stressed out to be proper Dudeists. Many bird species travel thousands of miles to weave elaborate nests, set up and defend territories, find mates, lay eggs, raise young to maturity in a few months then fly back home for winter. They do this again next year. They are way too ambitious, hyper-active, loud and non-contemplative to even come close to a Dudeist way of life. And for sure, they are way too superficial — into flashy colored plumage, elaborate mating displays and in a few cases, collecting shiny objects. If the Animal kingdom had an adult movie industry, birds would be its porn stars. I have several friends who are expert birders and with whom I sometimes go birding. I’ll say, as a practicing Dudeist, birding is frustrating. Birds move too fast, do not sit still and constantly hide behind leaves.

However, having illustrated the undude like nature of most birds lets not forget the amazing diversity of nature. Birds if anything are very diverse, over 10,000 species world wide and evolution is a tricky business. The essence of Dude finds its natural expressions in some very unlikely places. For example, owls are very different from your average song birds. Nocturnal by nature they avoid the other hyper, noisy, day time bird species. They are cryptically colored to blend into their habitat. They do not flock and tend to mate for life or not at all if conditions are not right. Most species do not migrate and many make no nest or use other birds already constructed nests. They sit still and sleep most of the day. Essentially, as a group, owls have more potential dudelike qualities than many other types of birds. This is not to say all owl species are Dudeist. The great horned owl most certainly is not. You can see it in their penetrating stare — they want to rip your head off. Great horned owls are the meanest, most bad ass bird on two wings. They kill and eat everything they can — including animals quite a bit larger and also, other owls.

One of the owls on the great horned owl’s menu is the spotted owl. Spotted owls are much gentler creatures than their Great horned cousins. They live deep in the old growth forest of the Northwest, California and all the way down into Mexico. Most of this forest has been cut down and most of the spotted owls are now gone. However, there is a fairly dense population of Mexican spotted owls in New Mexico and I was able to work with this species for several field seasons.

Spotted owls tend to spend most of the day in a roost tree. They don’t move much if at all. They close their eyes for a good while and occasionally open them to look around. Yet, often, you can walk right up to a spotted owl even when they are looking straight at you. The owl will typically just look at you, then shut its eyes and go back into meditation. I say meditation because that is exactly what it appears to be, still and quiet but not necessarily sleeping. They appear as little feathered Buddhas on their roost limbs.

The study I worked on had to do with military jet flights impact on spotted owl behavior. Military jets are very loud and fly dangerously low. If one flies over you out in the New Mexico woods it is so shocking you will most likely be left wondering who just set the bomb off out in the middle of nowhere while checking your shorts. Anything with ears would be justifiably shaken by the impact. Really, they are that loud. By the time you hear the sonic boom, the jet is far gone. They are crazy machines in close proximity to otherwise remote wilderness.

Considering the highly disruptive nature of this scenario, ultimate technology butting against ultimate wilderness, one may conclude that the peaceful, quiet spotted owls exposed to it may be thrown off their daily routine at least and perhaps abandoning nest and roosts entirely out of pure fright. Yet, the study found that, generally, owls tend to respond to loud noises by going back to sleep. Sometimes they will acknowledge the noise with a head turn or other signs of being mildly disturbed but overall the spotted owl is so imbibed with the essence of Dude they quickly return to their meditative state. The aggression literally does not stand and is met with continued passivity on the side of the owl. This commitment to calm in the face of calamity secures the spotted owl with a high perch on the Dudeist totem pole.