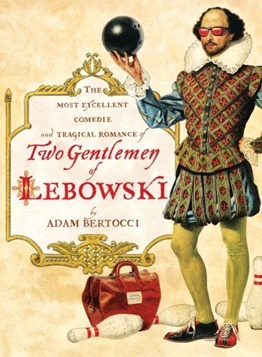 I just donned my newly acquired “Dude” sweater and sat down at my desk. I was supposed to write this review two weeks ago and…what, what day is this? It’s November? Already?

Exactly one week ago Adam Bertocci’s Two Gentlemen of Lebowski was released in paperback by Simon and Schuster. It wasn’t even a year ago that the first version of this book was released online to the masses of Lebowski fans worldwide. This literary work combines a love for The Dude and The Bard many can support. It has spawned theatrical plays, interviews, articles, Halloween costumes, and now a book.

I must confess I didn’t know what to think about this book when I first heard about it. I first came across the script back in January mere hours after it had been posted. It was a really great idea and seemed similar to what Phil Wells was doing with his project Dudesong*. I soon learned they were different, but I was still impressed with both. As I watched this meme explode on the internet, Adam and I scheduled an interview for my podcast.

Before the internet buzz was even beginning to die down, I heard some theater troupes were performing the play live. Unfortunately I wasn’t able to attend, but I heard they were awesome. This further proved the quality of the play. Soon after there were rumors of a book deal in the works. To be honest, I was quite skeptical. I couldn’t really envision why people would buy something they’ve already had the chance to read online, or something I imagined would be better performed than read. Boy was I proven wrong.

The first thing that stands out about this book is the cover. I’m not exactly sure who designed it. That information is mostly likely in the book…somewhere, maybe later I’ll take another look. It’s of a very dude-looking 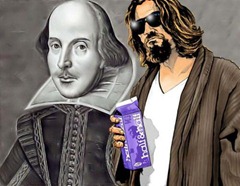 Shakespeare-ish fellow holding a bowling ball and wearing modern bowling shoes. At his feet are a ringer (bowling bag) and a few bowling pins. Red foil was used for his shades, sunglasses, or what-have-you. They reflect as you move the book back and forth.

Inside, each page of script is paired together with a page of definitions for key words and phrases you just read. This is an amazing addition to the original text giving readers like me, who are not well versed in 16th-17th century English. I’m not totally clueless, but many of the jokes and subtleties would have gone straight over my shiny, bald head. Another added treat are the pictures and illustrations. Many are in the style of old-school drawing and sketches depicting time appropriate things like a theatre, chamber pot, or game of nine-pins. Other images depict more Lebowski-themed object like a walrus, world-of-pain, or pacifists. Some of the images and definitions alone had me rolling on the floor with laughter. 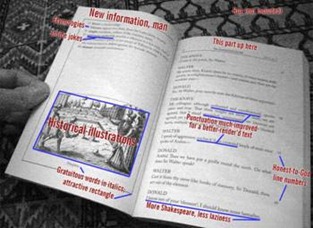 Currently priced for just $9.35 at Amazon.com, I think this modestly fits into most budgets. There are many Lebowski-themed books that have come out on the market in the past few years but few of them are ones I’d actually recommend people read as casual fans of The Big Lebowski. Bertocci has done a great thing here. He’s made Shakespeare accessible to Lebowski fans and has brought some fans of the Bard into the ranks of Achievers.

You can also listen to Liz and I discuss the book from our website. We’re giving away five copies courtesy of Simon and Schuster. Check out the link to find out how you can win.

*Dudesong is a Phil Wells’ project where he re-wrote The Big Lebowski script in iambic pentameter and rhyming couplets.