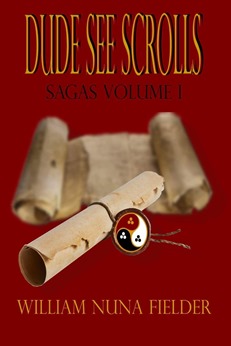 By the Arch Dudeship Dwayne Eutsey

Ever since the LebowskiFest dudes first published their fan-book I’m a Lebowski, You’re a Lebowski nearly a decade ago, a library’s worth of books pertaining to all things Lebowski have been published across the sands of time.

And in different genres, too.

They range from the religious (The Dude Abides: The Gospel According to the Coen Brothers) to the quasi-religious and philosophical (The Abide Guide, Tao of the Dude, The Dude De Ching, The Big Lebowski and Philosophy); some contain serious academic research (The Year’s Work in Lebowski Studies, Lebowski 101) while others offer clever parodies of literary classics (the Shakespearian Two Gentlemen of Lebowski: A Most Excellent Comedie and Tragical Romance and the Homeric Dudesong).

Now, with the publication of a new book I want to tell you about, I think the Dudeist community may finally have its own original epic tale.

According to its description on Amazon.com, The Dude See Scrolls by William Nuna Fielder is written in the same vein as Tom Robbins and Douglas Adams.

In a sprawling narrative, Fielder tells the saga

of America on the brink of another civil war. The evil forces that control the wealth of the western world have manipulated all facets of life, and have now set their eyes on turning unprofitable protests into full-scale profitable war. Can a network of slackers, peace lovers, and idealists help prevent the impending disaster? Guided by the secret knowledge hidden within the Dude See Scrolls, there may just be a chance.

The unfolding epic quest manages to tie a lot of entertaining strands together in the reader’s head: a trippy blend of Dudeist philosophy, Native American vision quests, and Norse mythology; a spectrum of characters that has goldbricking potheads on one end and a secret cabal of rich fucks on the other; a diversity of human cultures and overlapping alternate universes…and the smoke of burning weed, lots of weed, wafting throughout it like incense.

Honestly, I wasn’t sure what to expect when I offered to look over the author’s manuscript before he published it. Once I began to read it, however, it didn’t take long for the story to lure me in, especially after meeting three of the quirky main characters early on as they embarked on their Dudeist quest: 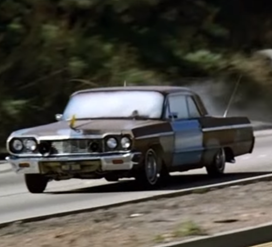 Meanwhile, two time zones west of said hospital, a Toyota hatchback loaded with three dubious characters was racing down the Yellowhead highway ten kilometers west of Edmonton, bound for an unpopulated region in the foothills of the Rockies.

The ensemble huddled together in the red car included an amateur musician, an internet blogger, and a yoga instructor from Winnipeg who enjoyed the scent of lavender mixed with tea tree oil.

You can imagine where it goes from here.

Well, actually, maybe you can’t. The narrative, which is often ludicrous in a good way, takes you on such a freewheeling journey with lots of unexpected twists and turns, that you’re never quite sure where it’s going.

And I enjoyed the proverbial ride.

But should I really call The Dude See Scrolls an epic…I mean, because what’s an “epic”? 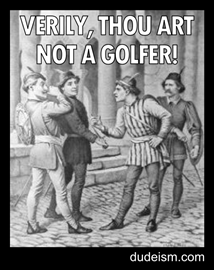 Well, I don’t mean “epic” in the same way the boys working in shifts down in the literary lab mean it. You know, one of those long narrative poems you snoozed through in English class that was written in a highfalutin style and involved a larger-than-life hero who says “thou” a lot. And I don’t mean to suggest that the author is self-consciously attempting to write an epic of some sort here, because he isn’t.

It was just that, as I read the manuscript, it occurred to me that it was doing two basic things that I think a good epic tale is supposed to do (aside from tell a purty good story): capture the general ethos of a community and weave it into a narrative set in a particular time and place that also manages to touch on some of life’s bigger questions.

For me as a Dudeist abiding in an undude world that’s totally gone crazy lately, that’s what The Dude See Scrolls did.

It may not be everyone’s cup of what-have-you (but, then again, what is?).

But I found this highly original tale a good story…and thurrah.