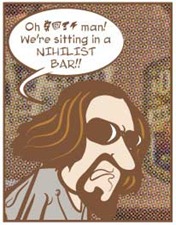 Hey we were recently contacted by a Lebowski-loving cartoonist named James Duncan. Not only did he write an episode of his strip where he celebrates his new found Dudeism and ponders a Dudeist Children’s Book (you know, for kids!)…

…But importantly, he’s also got a far out series going called “Walter and Dude’s Road Trip.” It’s definitely trippy! Read them all from the bottom of the page to the top for the full chronological effect…

It sure is fun to see all these new Lebowski-inpsired artistic projects. On a related note, if you haven’t already checked out the fabulous Little Lebowski project over at our forum, please do so.

Also, we’ve migrated The Dude De Ching to Amazon.com’s company CreateSpace. More royalties will be raised for our Kiva.org lending team this way and we’ll get better distribution (if you like you can even order it from your local bookstore!). Order it online here. We’re almost ready to disburse the first $1000 raised by sales from that book.

Plus, there’s a play called “Much Ado About Lebrowski” in San Francisco. What’s more, our friend and contributor Rob King is working on a board game.

Any other projects we should know about? Make us privy to the new shit in the comments section below or via email. 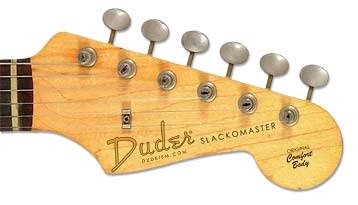 Some cool new stuff will be available at our gift shop soon. We’re even thinking of coming out with a line of Dudeism-inspired guitars. They’ll be green with some rust coloration. Here’s the headstock sticker (apologies to the Fender Stratocaster). Sounds exhausting. We might just stick to Duder Slackomaster tee shirts and stickers.

You can see the Dudely Lama playing his prototype Slackomaster at a Fourth of July concert here: