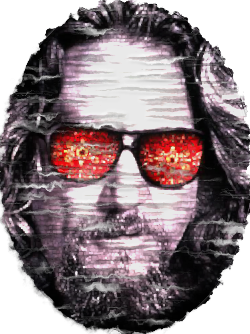 The Dude De Ching came about in 2009 when the Dudely Lama got in touch and asked if he could borrow my translation of the Tao for his Lebowski project. I said so long as the proceeds went to charity. And he was cool with that and it was a good idea and here we all are.

So it was natural for me to get in touch with ol’ Lama about my latest project. It’s not poetry so much as technology, a broader and deeper and more constructive kind of dialogue on Facebook.

I don’t mean an ashram or sing-a-long. I mean, if you think about it, the Dude actually spends very little time in his tub listening to whale songs. He’s there, sure, but mostly he focuses on Walter and Maude and Bunny and Jackie Treehorn’s collective crap.

In general I think the depth of Dudeism isn’t abiding in a bath sucking down White Russians all day. It’s abiding in the Oxford English Dictionary sense of continuing without fading or getting lost.

Like Walter and Donny and the Dude, Dudeists share insults and disagreements and feel totally happy together because we speak from the heart. We tell our friends in a playful manner to shut up and no one gets huffy. And that’s what this new technology is all about – a place we can argue and disagree and roll together.

Because in this latter day of a billion brains wired into the hive-mind called Facebook we’ve lost the ability to focus on owning our own crap. And it’s hard for Dudeists to reach out and rub up against other realities online without fading or getting lost.

So let’s take a step back. Dudeists bowl because bowling is beautiful. What I’m talking about here is basically bowling for Facebook. And that’s why there’s this shiny new jelly-belly coloured bubble up on top of the Dudeism facebook page.

It’s called a moshpit and it organizes opinions on different subjects all connected with Dudeism. It gives every opinion, every subject and every person who uses it a kind of karma to rack up a debate. Like this: 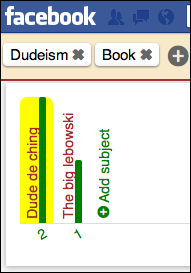 The moshpit is not about the category of Dudeist books per se, that’s just my f’rinstance, the first thing I saw today when I peeked inside it. The moshpit compares all things in all categories so we can say when one is more or less dude than another. You don’t agree with something that comes up, you mark it down. Or roll an opinion of your own on some other subject.

These arrows let you mark the opinions up and down, or tap the yin-yang to roll your own on the same or a different subject. The buttons create public votes that spread the debate via Facebook newsfeeds. Like the ordinary Facebook "Like" button but a lot more dude than Like because it’s not voting for some web page or status update. It’s comparing the things those things are about, their subjects, and connecting all the people interested in these subjects everywhere.

This is a league game, Smokey.

There are other Dudeism books than the two above but as of this writing no one’s rolled an opinion on them yet. Go ahead if there’s a book you like – or one you hate. You don’t have to be talking books or Dudeism to roll your opinion in the moshpit either. Just tag it right – which I’ll explain in a minute – and whatever you say will fit in fine. The moshpit’s much bigger on the inside than the outside. 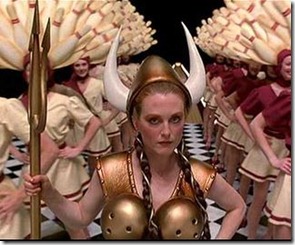 Dudeism opinions naturally come up first in the moshpit on the Dudeism page. So if you want your ideas to appear here you need to tag them with the #Dudeism tag. That # tag says Dudeism is one of the categories your opinion fits into. You can always set up another moshpit of your own on any Facebook page or blog page of your own on any other category you like.

But the beauty here is you don’t even have to do that. Just enter your opinion directly in the moshpit and tag with any categories that make sense to you. You can trust it to turn up wherever there are people who share your interest. No matter what the subject is, your opinion is gonna tangle with a lot of people.


This is not ‘Nam. There are rules.

The moshpit is a kind of bowling, and bowling has rules to focus the form. It’s not like American Idol where you click a button like a monkey a thousand times to make a difference. Bowling’s got ten pins and ten frames per game and in the moshpit you get ten votes per day. You can’t save them up. You don’t use them, you lose ’em, but you can always come back tomorrow to play another ten.

Also bowling’s got a spare system. So whenever someone votes for your opinion, you get a spare vote as a bonus. Except you can’t swap spares back and forth or it would all go infinite monkeys again. And you don’t score spares if your Karma goes below zero. That’s over-the-line.

That’s all the rules we seem to need. Someone who rolls a popular opinion can build up a fat wad of spare votes, and we’ll want some kind of league to redeem those for prizes maybe some day. But right now the moshpit is like the Olympics – you play for the honor and the fun and no one gets professionally sponsored.

This is what happens, Larry.

Unlike regular Facebook, you’ll see people turn up in the Moshpit you don’t know. It’s a public place and there are strangers there. But everything appears in order of decreasing karma in the moshpit. So uptight opinions – spam, trolls, haters, off-topic – all get flushed away if we all keep marking up the good stuff and marking down the bad. 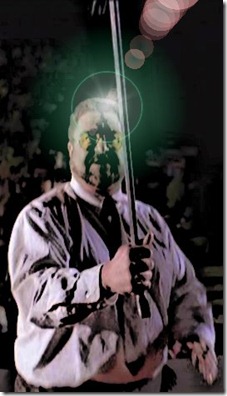 The moshpit disappears negative-karma opinions so that most of the time you’ll never even see the uptight ones. And if someone does torque you off, you use the Ignore button on them rather than a tire iron. Then they disappear too. You can even disappear people you don’t agree with before you see them just by filtering on the way they vote. This is what happens, Larry.

Certain things have come to light.

I want to talk about the technical stuff now. You don’t need to get any of this to mark opinions up and down. But it’s important if you’re going to roll an opinion of your own.

Remember that # tags a category for your opinion like on Twitter. Then there’s the $ tag, which is how you indicate the subject of whatever it is you’re blathering about. When you roll any opinion it has to have a subject. But no more than one subject per.

For example you might say "$Walter loses it but he’s still a #good-man." The $ tells the moshpit your subject is $Walter and when someone marks up your opinion they’re agreeing Walter is a good man. Not to be confused with Walter being $Goodman. You use dashes if your tag includes multiple words so no one confuses Goodman with good-man.

You can also compare your $subject with another %subject. Karma only goes to the $-tagged subject. For example, if I say "$Maude is one #hot #rich #artist. Not like that tramp %Bunny." Karma from votes on my opinion goes to Maude, but not Bunny. Maybe karma blows on her toes … 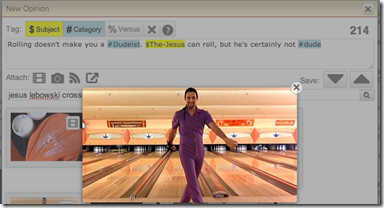 Rolling against the Jesus.

You can mark your opinion as negative when you save it. That gives it a pink down-arrow. Like the above – "Rolling doesn’t make you a #Dudeist.  $The-Jesus can roll, but he’s certainly not #dude." We make that a negative opinion so that when people vote for it, they’re voting against the-Jesus as dude and as Dudeist. The only thing I’m positive about $The-Jesus is that he’s a #creep …

Anyway here’s hoping you make the finals yourself, dude. Just remember – there are only a couple hundred thousand of us Dudeists in the world now so we can’t expect everything that goes on inside the moshpit to go our way. Because sometimes you eat the bar, and sometimes, well …

[Play with Dosh Mosh at the Dudeism Facebook page here.]