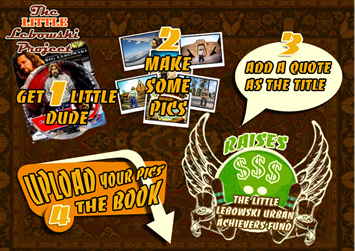 Thaaat’s right, Dude. The beauty of the Little Lebowski project is its simplicity. If the plan gets too complex something always goes wrong. The plan is to have folks take pictures of The Big Lebowski action figures for a photo book which will be sold for “The Little Lebowski Urban Achievers Fund” on Kiva.org.

Do you have an action figure of the Dude, Walter, Jesus or Donny? If so, no matter where you are in the world, you can make a unique picture. Photograph yourself because you are u 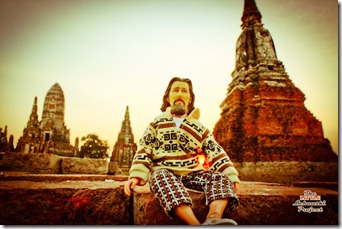 nique. Your friends are unique. Your town or some local event is unique. It’s all closer than the In and Out Burger on Camrose. Then add your masterpiece to the Flickr group or on Facebook. The Dude needs to find his rug, and the more achievers that help, the better!

I’ve been a Dudeist priest based in Amsterdam since April 20, 2009. A couple of years ago my best friend gave me an action figure of The Dude for Christmas. Of course we took him out of the box and started to put him in poses and taking pictures. It was almost as much fun as driving around, bowling and the occasional acid flashback. Little Lebowski was born. 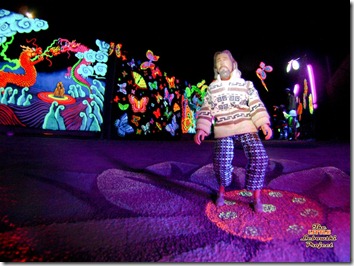 As luck may have it, I am fortunate to travel around the world a lot. Often on my own. With the challenges of travel and new experiences, I’ve found it’s a good idea to go with the flow. I started to take Little Lebowski with me everywhere I went. Being a Dudeist priest I thought this was the perfect talisman to remind me to ‘Abide’ and stay in the flow.

Most of my travel videos and photos always seemed like pretty postcards. To be honest it was pretty boring to anyone but me. I decided to start making pictures with Little Lebowski as a subject. All of the sudden my friends started to appreciate my pictures. People I would meet on my trips would add Little Lebowski as a friend. The more my old and new friends enjoyed the pictures, the more I went out to achieve better ones. 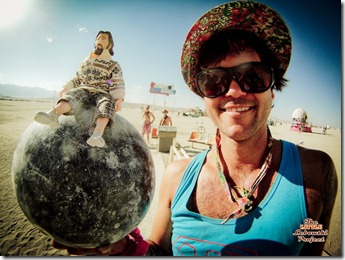 The idea of taking travel pictures with an object started with the “Gnome Game”. It was popularized by the film Amélie in which the main character steals her father’s garden gnome, and sends it off with a stewardess to take pictures and send back as postcards. The first recorded “Gnome prank” was by Phil Tibble in the 1980’s in Australia. “The Gnome is not the issue here Dude!” Because let’s be honest, there is no way a Gnome is cooler than The Dude.

Little Lebowski is the best travel companion. First of all Little Lebowski takes er easy standing in any pose for as long as I want and doesn’t complain. Even more important he reminds me to keep er easy myself while on the road, making every trip more enjoyable.

How often do you hear some business man traveling saying, "I didn’t have time to see anything except the

hotel and the office." Let me tell you a secret. There’s always time to explore a new place if you really want to. Knowing that Little Lebowski needs to keep searching for his rug, I found myself taking a short layover in Dubai for a couple of hours in the middle of the night just to get a picture there. I jumped in a cab and asked the driver, "If you could take one picture of Dubai at night, what would it be?" The taxi driver replied, “How about the tallest building in the world?" Perfect!

Without the Little Lebowski, I wouldn’t have seen it, or countless other sites, or met so many great people. I can die without feeling like the Good Lord Jibbed me.

While I’m photographing Little Lebowski often people stop and ask, "What the hell is this man?" Usually they think I’m taking pictures of Jesus. The most common mistaken identity. I smile and say, "No, not Jesus man." Then someone sharper than Larry Sellers will say, "It’s the Dude! Can I get a picture with him?" Of course, the Dude abides. Even if I might not understand their language, quotes from The Dude are understood. I’ve photographed him with everyone from the founder of Atari to the founder of Couchsurfing. I’ve always found fans of The Dude from Hong Kong to Madrid, or from Oktoberfest to Burning Man. He really ties the world together. 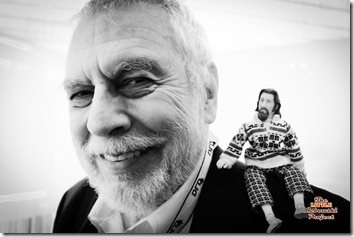 However, if someone was to get a good picture of Jeff Bridges and Little Lebowski, my friend, you will have the cover photo on the book!

The balls of Dudeism strike into a variety of religions. I love the Little Lebowski pictures at religious landmarks. Him being mistaken for Jesus posed some strange looks when I was photographing him in Jerusalem. However it was worth it. My favorite picture is of Little Lebowski walking down the Via Dolorosa. This is the same street where Jesus Christ walked across with his cross and crown of thorns. And now Little Lebowski has a stroll. But we haven’t got all the spiritual sites in the World. But that’s where you can help, can’t you? 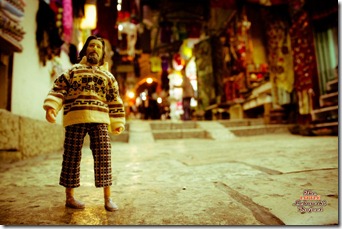 Ok, but how does this all add up to emergency? It seems there are only a few Dude action figures left. I’ve got pretty definitive evidence from the main guy. The producer has informed me they will probably not be making new ones. I’m not trying to scam anyone here with trying to sell these Dudes as I’m not with those guys. My only hope is that some of my fellow Duders have purchased a Dude to tie the room together, and want to help out Little Lebowski with pics of their own. We have until Thanksgiving to get all the photo submissions to make the book in time for the Christmas Holidays. A perfect gift for The Dude in your life. 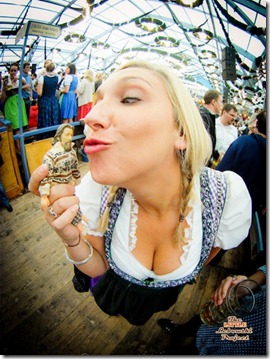 So now you happen to know that there’s a Little Lebowski book on it’s way. I guess that’s the way the whole durned human comedy keeps perpetuatin’ it-self, down through the generations, westward the wagons, across the sands a time. So please add your pictures to Facebook or Flickr, and become a Little Lebowski Urban Achiever. You will really tie the world together.