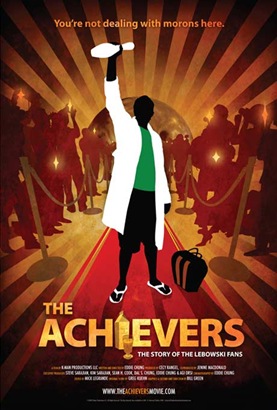 Eddie Chung’s The Achievers: The Story of the Lebowski Fans is rolling into your town!

Several hundred fortunate achievers were lucky enough to witness Eddie Chung’s documentary about Lebowskifest at the recent ‘Fest in Louisville. According to most accounts (and police records) it was quite the event.

Now, at long last, it’s the general public’s chance to join in the mayhem with selected showings at various locations around the United States. (See below for current schedule but double check with the official site to be sure.)

Five years in the making, the cult of Lebowski finally has a documentary to help explain to future civilizations what all the fuss was all about. Furthermore, nap-happy professors of Dudeism will have another film to fill a class with for Introduction to Lebowskology 101.

Here are some early reviews of the film: