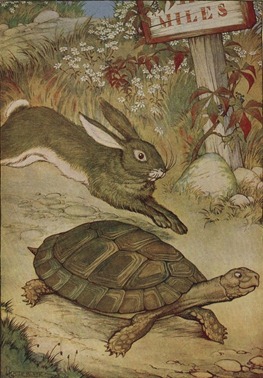 Dudeman Nature has spent much of the last year walking through the Mojave desert of California conducting biological surveys. It’s a great way to feed the monkey for a nature dude. I mean, hiking in natural areas is what I do on my time off anyway. It’s a harsh, parched and unforgiving land though. Often times, heat warshes over a dude, hotter than a Hollywood starlet’s tukus on a well-light California night. 110 degrees Fahrenheit is not uncommon from May through August and yet, at night it can get cold enough to chill your oat soda without the need for ice. Sometimes a dude can walk a long stretch without seeing much that would pass for living out there – sometimes not even a tumblin’ tumbleweed can be seen. However, there are a few courageous critters remarkably adapted to this crazy climate.

One critter I commonly look for on my surveys is the threatened desert tortoise and another I regularly see is the desert hare or black tailed Jack rabbit as they are called, in the parlance of our times. There is quite a contrast in lifestyle between the two; The plotting ultra slow tortoise and the fleet, bounding Hare. I often flush the Hares out from underneath a shrub where they are escaping the heat and taking cover. I never tire from watching how fast they cover ground, a remarkable beast, oh yes. And then there is the tortoise which spends most of its life napping in its burrow and when it does come out it does so nice and slow like. It is equally impressive to see how slowly and patiently the tortoise moves, one ponderous limb at a time, across the landscape.

Of course, seeing both of these critters, such opposites, juxtaposed on the landscape, prompts me to reflect on perhaps the most famous of the Aesop’s fables, ‘The Tortoise and the Hare’. We all know the tale. The arrogant Hare mocks the slowness of the plodding tortoise until the tortoise gets annoyed enough to challenge the hare to a race. The Hare is so certain he will easily beat the tortoise he decides to divert from the race to eat some greens and then to take a nap. The Hare, of course, falls into a deep sleep and meanwhile the tortoise plods along and gets to the finish before the snoozing Hare proclaiming “ Slow and Steady Wins the Race”.

Now, if you’ve been listening to The Dudeman Nature’s stories you will know that in the very first article the Desert Tortoise is held in the highest regard as a Dudeist Totem. If you have no frame of reference and feel like a small child that just walked into the middle of a movie I would suggest a perusal of “The Inherent Dudeism of Animals” or just think about a tortoise and you may realize it is one profoundly Dudeist critter if there ever was. The Hare on the other hand, at least in the context of our fable, is the antithesis of the Dude. A cocky, arrogant, braggart. One could imagine the Hare would feel right at home in a purple jumpsuit pointing fingers at pendejos and threatening to stick pistols up there asses and pulling the trigger ‘til it goes click. Jesus! You said it man, nobody fucks with the Jack Rabbit. 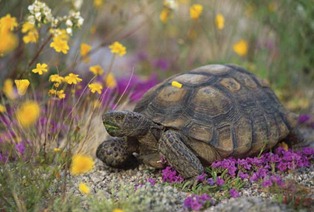 And yet in the long run the Hare is a fucking dunce. Like so many bloated braggarts, he toots his own horn so often and so hard he forgets he actually has a modest task that is his charge, running what should be a really easy race to win. And so, losing at his own game becomes his greatest humiliation. Meanwhile, you have the humble dude tortoise that never claimed to be fleet of foot or even into racing at all, which means he really didn’t have anything to lose by racing the hare anyway. He has no appearance to upkeep.

There are great lessons in this story that fit right in there with Dudeism. Talent when combined with an encumbering ego loses when pitted against modesty and a steady, humble effort. The Dudeist wisdom of the tortoise takes advantage of Hare’s arrogance and sets it against him. All the tortoise ever wanted was for the Hare to quite bustin’ his aggets, yet he ends up winning anyway, by going at his own dudely pace. 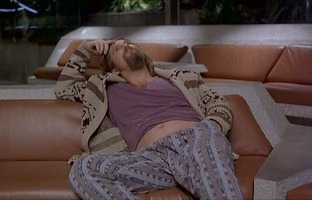 The tortoise knows life is a long haul – if you are lucky enough to live a long one. Running around top speed all the time is a sure way to shorten it and make it way too uptight. The tortoise shows us that takin ‘er easy is the way to win the life long race or as or as it says in the Tao Te Ching , ‘A journey of a thousand miles begins with a single step’.