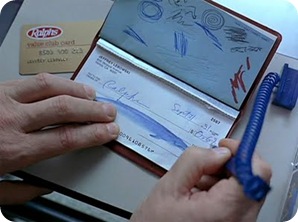 You would be watching this instead of reading about it if the fucking mall cops hadn’t confiscated my video camera. Maybe somebody captured it with their cell phone. Here’s what happened…

It’s yesterday, the afternoon of September 11. Twenty-three Pin Dudeist monks and I are at The Duder Bar, along with the other usual suspects and the owners, Ron and Nancy, who have become intrigued by the re-tuned vibe, the heightened hum, which has suffused the bar in recent weeks. Ron, is circumspect, however, responding to the increased level of outlandish synchronicity and surrealism that seems to be finding its way to his door with his usual, “same shit, different day” admonition. Maybe he is the most awake of all… 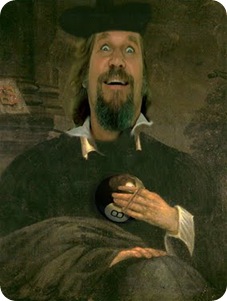 …anyhow…we decide that the only thing to do is commemorate the Dude’s well known act of prophecy in the first sequence of The Big Lebowski…that is, by writing a check for the half and half dated Sept. 11, 1991…Ten years to the day before, well, you know what…and also the day his rug gets pissed on…

(Tabloid headlines want to know…”IS THE DUDE A NEW NOSTRADAMUS?”)

…by embarking on a pilgrimage (we call it a meditation) in full Dude/monk gear to the nearest supermarket, opening and taking a taste of the old half & half and then lining up at the checkout and writing 23 checks for our respective purchases, all dated Sept. 11. This phase of the operation is followed, of course, by returning…en masse via public transit…to the Duder and, with single pointed attention…think Zen tea ceremony…watch as Louise, our sacred bartender and White Russian Master…using the newly purchased half & half…prepares the White Russians, which we then contemplate for a respectful time before imbibing, thus consummating the solemnity.

(Several of the 23 have had interface with either the CACOPHONY SOCIETY or the URBAN PRANKSTER NETWORK or both and acknowledge the inspiration factor implied in the above maneuver, by the way…) 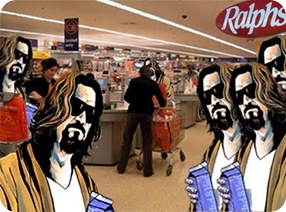 Be that as it may…how shall I put it?…our shopping expedition does not go well. The mall cops patrolling the store perceive the invasion of the dairy aisle of the supermarket by 23 fully robed Pin Dudeist monks as a potential threat to the business establishment, the municipality and, indeed, the nation. They call for reinforcements and attempt to round us up but we scatter and proceed to shop in other areas of the enormous store. The real cops are called and we elect to exit sans half & half and head back to the Duder…not embraced by a rainy afternoon of defeat and gloom but by a hurricane of whoops and laughter. The idea of converging upon public transit is abandoned and off we bound in all directions…robes flapping.

Back at the bar, we proceed with the “tea” ceremony with complete composure and protocol. A couple of cops arrive…stride up and down the bar sizing up what’s transpiring…then leave, waving at Ron and Nancy as they go. 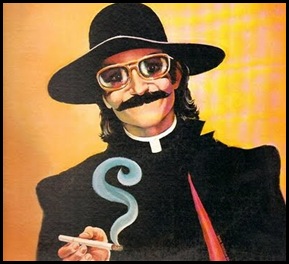 Educational way to spend an afternoon, wouldn’t you say? But the day has just begun…and we find ourselves in the midst of a string of Strange Day Occurrences. Are we all stuck inside of a living koan? Is that a whiff of Suntory-satori in the air…or something else?

All are hungry by this time, so pizza is ordered. Someone, remembering FATHER GUIDO SARDUCCI’S (a Duder Bar regular from days past) game…enshrined on SNL’s Weekend Update…of “Find The Popes In The Pizza”…suggests that we find the Dudes in the pizzas when they arrive. It is surmised that on a day such as this, surely a Dudeist Miracle will occur. Forget about finding the visage of Jesus or Elvis on a potato chip. A wide eyed “delivery associate” arrives and through the, by now, pea soup White Russian fog, the Dude is, indeed spotted on one of the pizzas… 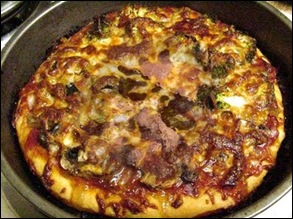 (This holy pie will wind up framed and on the wall behind the bar…itself the object of pilgrimage and adoration. Some will say that gazing upon it cures hangovers and various STDs, hence the throng of aspirants wanting a look each morning when the sacred grotto opens its doors…across the cases of oat soda…down through the ages…)

…then…we hear a roar in the street outside. What now?…we collectively wonder out loud. A tall, skinny gentleman dressed in late 19th century chauffeur garb, complete with scarf and goggles swaggers into the bar and stops in front of Louise.

“Your car, madam,” He announces as he offers his arm to her. She hesitates at this high weirdness, but we all encourage her to take the chauffeur’s arm.

We follow them outside where an immense roadster shaped like a bowling pin is surrounded by the curious. The chauffeur helps Louise into the car and they thunder off down the street. 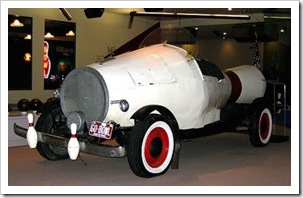 Elliott, one of the monks, says, “Don’t worry…he’s just taking her through the park and back…”

Turns out Elliot knows a guy who just bought a roadside attraction/bowling museum in the mid-west…including the Pinmobile…and couldn’t resist.

We all go back inside where a video is playing on both of the TV sets behind the bar…we get a video today after all. I will not describe the video…and still don’t know who put it up…but present it herewith for your enjoyment and edification…

I notice a Stranger at the end of the bar nearest the door. Did he just come in? Cowboy hat…handlebar mustache…no…couldn’t be. He watches me, grinning, as I walk over…extends his hand. As I get closer I realize the he’s not the Stranger I thought he might be after all. Same accent though.

“So what do you think of all this?” I inquire.

“All what?” he replies, taking it all in.

“The Circus,” he responds, lifting his glass of sarsaparilla in a toast.

We click glasses and drain our drinks. The Stranger stands, turns to walk out the door, then looks back at me and the crowd of costumed monks and other Duder Bar folk and grins again as he drawls…

“Pardon my language young feller…don’t like cussing…but you know what they say…same shit, different day…that’s all. Catch you a little further on down the trail.”

He turns and disappears into the night.