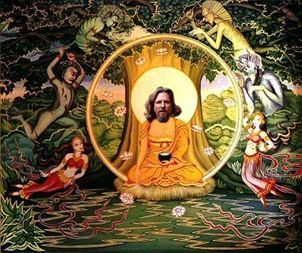 When it comes down to The Big Lebowski, you can be struck with dudelightenment immediately or you may need to watch it a few more times before you become a Dudeist. When we see the Dude, learn the Dude’s ways, or quote the Dude, to an extent we embrace our latent inner Dude. We welcome the part of us that will confront adversity, evil, or fascists and say, "Fuck it. Let’s go bowling."

What we learn from the Dude is that nothing is that big of a deal, that we need to take life for the ride it is. We’re put on this big blue marble to play around and generally enjoy ourselves. The Dude has his happiness, which is a bungalow in Venice, CA where his rent is due on the tenth. Walter’s is his security business, the lanes, and fragments of what used to be a loving relationship. Donny’s is his strike and the bliss which follows. 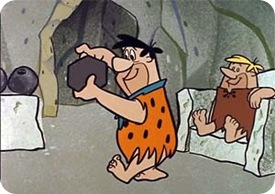 We must realize that to embrace the way of the Dude, one does not have to be the Dude or even emulate him entirely. One must simply do as the Dude does. I mean, uh, ya know, What Would Duder Do? Know when you’re fucked, know when you’re not, and know when, well, you just don’t know. What we see with the Dude is acceptance. He takes them as they come and he deals with them one by one.

Sure the Dude might get angry, and he might get melancholy, but that’s the entirety of existence, and in the end, The Dude Abides. We see the Dude as one who is aware of his place, and fits there well. That’s something every person strives for, or at least thinks about striving for. In his laziness we see how he turns like a gear in Los Angeles – playing into others’ lives and enriching them for the experience. And man, the favor is returned. We’re all in this together, and we all have to abide the best we can until we reach the Great Bungalow in the Sky. 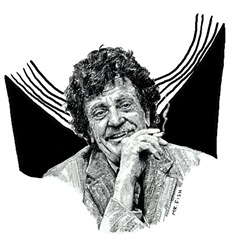 There is a quote from Kurt Vonnegut that emeplifies a Dudeist mindset. It is, "We were put on earth to fart around." This is what we can take from the Dude: Just go with it. Like the Dude or the Stranger, either way you’re going somewhere, so go. We have to see life as the durned human comedy it is, and that we can’t take it too seriously or else we become uptight and start being very un-dude. Take the relaxed path, ‘cause its nicer and there’s probably a bench along the way.

It may seem like the Dude knows something we don’t, that he has some kind of secret. But knowing the Dude, he probably doesn’t have one, or can’t remember because of all that Thai stick he smoked in college. So whenever you’re stuck with someone’s toe on your mind, or a nihilist is trying to cut off your johnson, just remember that, yes, even though the Dude minds, he abides in the end. And we all should too.