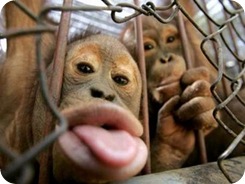 Hey Dudespaper fans. Sorry if things fell apart around here. Wouldn’t you know it but our database got corrupted just as The Editorial-We-in-Chief split to Malaysian Borneo to do a little bit of takin er easy. That’s why you got a page of gobbeldygook.

So I’m in a hotel in Sandakan town about to head off to see some orangutans tomorrow (very Dudeist monkeys, by the way) and have just managed to reinstall the one fragile backup I had, which luckily was pretty much up to date. I think we lost an article or two though that were scheduled to be published later this week.

As the Arch Dudeship said to me just a few hours ago via email, this is in fact a very Dudeist occurrance – having the plane crash into the mountain and then having to deal with it in a dude way. I have to admit that I haven’t been very dude about it, though. I thought I’d lost all the brilliant work of all our beloved contributors, not to mention my own persnickety pixel-pushing.

But now that it’s more or less over (for now) I’ve learned a valuable lesson – namely, when the going gets tough, drink more beer. Unfortunately, Malaysia is a Muslim country and it’s hard to find cheap booze after 9pm. Next time I’ll plan ahead and travel with a bottle of Kahlua.

Also, sorry, but the right hand column is still not fixed – where there used to be inspiring Dudeist thoughts for the day and other stuff there’s now a beigeness beiger than a watered-down White Russian on an overcast Los Angeles afternoon. We have health problems.

Anyhoo, at the beginning of February we’re going to kick things into overdrive. Dude willing. Things are prone to get fucking interesting, man. All sorts of new shit to become privy to. Joo said it mang.

Thanks for your support and for sticking with us when darkness warshed over! Please keep spreading the Dude word.

Oliver Benjamin
Editorial We in Chief