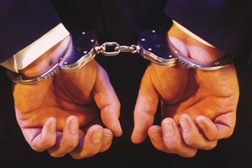 Veteran columnist Bob Herbert just came out with "Stop Being Stupid," an op ed piece for the NY Times that almost sounds as if it were tailor-made for The Dudespaper. (If you’ve had enough of the Times, we’ve got a sweet gig waiting for you here, Bob.)

In decrying the current state of the US economy (and foreign policy, etc) Herbert uses a quote from Big Lebowski-like pyramid scheme maven Bernie Madoff to tie the situation together:

The mind-boggling stupidity that we’ve indulged in was hammered home by a comment almost casually delivered by, of all people, Bernie Madoff, the mild-mannered creator of what appears to have been a nuclear-powered Ponzi scheme. Madoff summed up his activities with devastating simplicity. He is said to have told the F.B.I. that he "paid investors with money that wasn’t there."

Somehow, over the past few decades, that has become the American way: to pay for things — from wars to Wall Street bonuses to flat-screen TVs to video games — with money that wasn’t there. 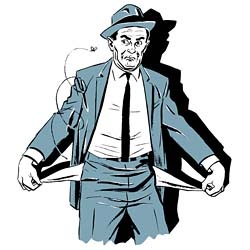 There never was any fucking money!

What we have here are a series of victim-filled crimes: said victims being the entire US populace, oh, and just about everyone else in the world who was connected to our battered green Gran Torino with a briefcase of billions that was parked in a handicapped spot. Aside from a few bushmen in Papua New Guinea who remain mostly immune, this affects all of us. Still, those Papuans might want to hitch up their penis gourds and start sharpening their poison darts.

Of course, as Herbert points out, this not only affects all of us, but it is effected by all of us. We are all guilty of feeding the monkey (and the fire) with overconsumption and greed. As P.J. O’Rourke put it in his hilarious indictment of government, Parliament of Whores, "Every government is a parliament of whores. The trouble is, in a democracy, the whores are us…We can vote ourselves rich."

Doesn’t anybody give a shit about the rules? Well, technically speaking, there never really were any rules. As important as our basic freedoms may be, if people are going to prove so stupid and gullible, we might need to set up some more boundaries to curtail a bit of laissez-faire capitalism. Even the always-confident Libertarian-leaning magazine The Economist is starting to hedge its ideological bets (1, 2, 3). 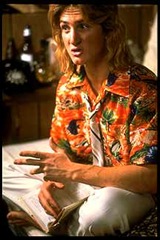 "What Jefferson was saying was, Hey! You know, we left this England place ’cause it was bogus; so if we don’t get some cool rules ourselves — pronto — we’ll just be bogus too! Get it?"

When it comes to the financial market, we need some cool rules, and pronto.