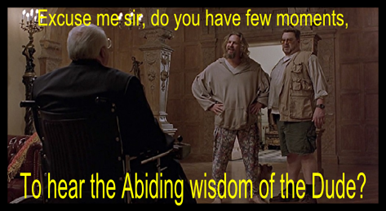 As Dudeism grows and more people become part of the community, invariably questions of a meta-physical nature come up. It happens that some dudes want to discuss whether there is a god or gods, or if there’s any sort of afterlife. Is there a Big Lebowski in the sky? Do we cease to be, or do we still roll after we shrug off this mortal coil? What is the meaning of life, and what is a Dude supposed to do about it? The Dudeist answers to these questions range from, “we just don’t know,” to “can’t be worried about that,” to “just abide, man.” 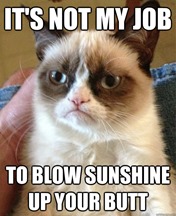 At this point Dudeism is growing faster and faster, with tens of thousands of people becoming ordained in the Dudeist arts every year. New Dudeists come with a variety of views regarding a supreme being and the existence of an afterlife. Which is cool, plenty of room in this tent for free thought and theorizing, but what does Dudeism have to say on the subject? Is there a way to have discussions of this nature within Dudeism, should there be? Officially Dudeism takes no stand on meta-physical questions of this sort, it makes no claims about deities or an afterlife. That’s not what Dudeism is here to do, Dudeism is about living in the present, about answering questions about how to live through the strikes and gutters of life. 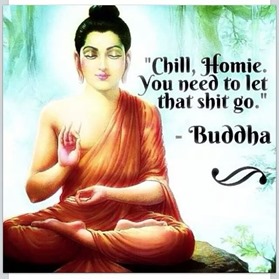 So, is there a Big Bowler in the sky? There is an old story in Buddhism, where two men asked the Buddha a question very important to them, one that consumed their lives. The first, a devout theist asked if there is a god. The Buddha told this man that absolutely not, there is no god. The second man came to the Buddha later, an ardent and convinced atheist, he asked the Buddha the same question. “Is there a god?” The Buddha told this man, yes, there is definitely a god, no question. Confused the disciples that traveled with the Buddha asked him, “Why did you give them two totally different answers?” He told them that because the two men had become so convinced by their own answers to the question that they had lost sight of taking care of their lives, here, now. That the question itself is circular, leading away from true self-awareness. That letting go of hard held belief or disbelief freed the mind to be in the present. The answer makes sense either in the affirmative or the negative, so ultimately, we just don’t know man. Whether there is any god or gods or not, Dudeism makes no claims either way, it is not even really a question asked within Dudeim’s philosophy. 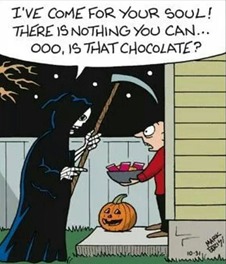 Is there something else that comes after this life? Do we move on to the finals, or is it roll one game and out? Again, in Dudeism, we just don’t know Dude. However being heavily influenced by Epicurus, maybe we can take a bit of advice on the subject from him. When it came to the question of death, Epicurus said that it should not concern us because, “When we exist death has not come, and when death does come we do not exist.” Or as another Great Dude in History put it, “I do not fear death, I had been dead for billions and billions of years before I was born, and had not suffered the slightest inconvenience from it.” Dudeism doesn’t pretend to know what happens when we die, but as long as life goes on man, you might as well not be worried about that shit. 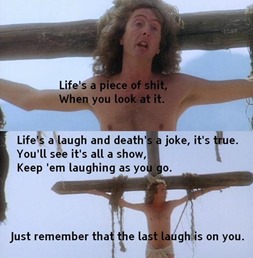 What’s it all about then, why are we here and what are supposed to do? Just take it easy man. Taoism (the uncompromised first draft, before it got superstitious) teaches that we are just here, and there’s nothing to “do” about that. Dudeism has been described as closely relating to this type of Taoism. In Taoism as in Dudeism it is all about abiding through the ups and downs of life, not fighting the reality they represent. It is about living authentically in the present moment, it’s not what score you get, it’s how you roll that counts. Life is a journey, enjoy the ride through all the ups and downs. Taoism and Dudeism teach that the meaning of life is to live, and all there is to do about that is, just abide. 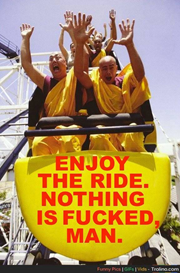 Dudeism is not interested in trying to answer the great meta-physical mysteries. It is a worldview concerned with living an authentic and abiding life. However Dudeism is made up of Dudes, and Dudes are going to have questions about these topics, and that’s cool. We all have questions, no one really knows the answer to any of those questions, but it may help to contemplate them nevertheless. It has been said it is not the questions we should fear, but the answers, clinging to our versions of the answers can lead to some undudely feelings and behavior. We can have plenty of debate but, as Dudeist, we should always be focused on taking it easy, and not letting our emotions get the better of us, like Walter would. When another Dude’s toe slips over the meta-physical line, don’t go waving a gun around the conversational lanes. No matter what an individual’s beliefs are, it is their capacity to abide and take it easy that matters in Dudeism and the Dudeist community.