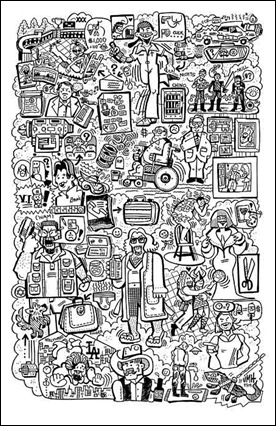 Well, the Dudels just keep pouring in. We were recently contacted by a wise feller from Philly who’s created a piece of work so stupefyin’, with so many ins and outs, strands to keep on old Duder’s canvas, that well, we practically lost our train of thought there.

This artist we want to tell you about, a fella by the name of Jim Horwat manages to fit so much information right in there that his art should be commended as strongly original — and that’s no mean feat in this day and age. Check out his website and if you like, order a print. We’ve got one in our ever-growing Dudeseum and it really ties the room…you know. Click on the image to the right to see it in detail.

We asked Jim to give us a little backstory on how the masterpiece came about and he kindly wrote the following for us:

This whole thing began, weirdly, with the first couple of Friday the 13th movies. In early 2008 I was playing around with a new style… these tight pen & ink "Where’s Waldo" style compositions… taking all these sarcastic snippets of the Friday the 13th films, throwing in some pop culture references and then going crazy with the photocopy machine at my job… totally obsessive stuff and I got lost in it. It was just this fun little "brain buster" project to see if I could capture the entire essence of a cheesy slasher film into a small 8 1/2 x 11 inch space. Long story short, I made some prints of a couple cult movies to share at the Cherry Hill Horror Conventions over in New Jersey. These conventions have all kinds of elaborate cast reunions and the feedback to these drawings was strong. Fans were starting to suggest new movies to illustrate and on several occasions fans were asking for a Big Lebowski print. I was not aware of the rabid fan-base this movie had.

Some time later in 2009, my girlfriend was showing a mutual friend of ours my artwork. She instantly asked if she could commission me to do a Big Lebowski piece because it’s her husband’s favorite movie of all time and his birthday was around the corner. My girlfriend was shocked by yet another request for a Big Lebowski piece, noting that this was probably the 7th time it came up. I went with it… when you get that many signs, you have to! I had seen the film in college and liked it, but never realized the depth of it until studying up for the project. This would be where your website entered the scene! It was a HUGE help because we were watching the movie a lot and formulating all these ideas and then I was able to tap into the honest pipeline of the fans. There is SO much love out there for this film! I think it’s great. This is seriously a pop-cultural landmark flick. It’s hilarious and charming on so many levels. 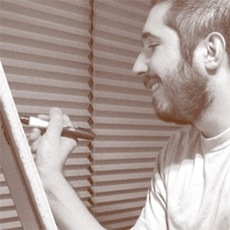 At first I had considered trying to illustrate the twisted plot visually. I was watching the film practically frame by frame and had a folder bulging with sketches. Further into the project, it hit me that this was too much information to sardine can into an 11×17 inch poster… so I called up our friend one morning as the deadline loomed and ended up having this 2 hour conversation about the Big Lebowski. We decided to focus on the characters in the Big Lebowski and tie it all together like a woven tapestry from the far East, where every character has deliberate placement. The Dude, would be front and center, as he represents the "middle path". All the characters would then spiral outwards from the Dude and the suitcase, the object of their desires… which ironically contains a mangled phonebook.

That’s basically it! I sold the original art to our friend and her husband loved it. They encouraged me to make prints of it and get it out there to the fans. The cult movie themed art in this style has been gaining some great momentum. The prints sell well online and here in Philly. I also cracked the West Coast with a new piece in Gallery 1988’s upcoming "Crazy 4 Cult" show in LA.