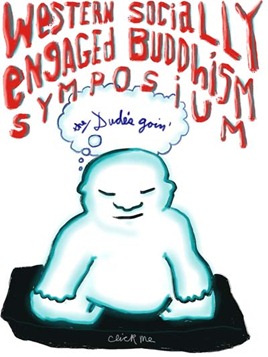 This last Friday the thirteenth Jeff Bridges took the stage at the Zen Peacemakers Symposium and unabashedly announced, "I gave Bernie a little head," referring to Bernie Glassman founder of the The Zen Peacemakers. He said he likes to give all his friends a little head, saying that it deepens their personal connection. With abandon Jeff then went on to display his little head skills, in front of everybody. Not satisfied to stop there, he offered to give any member of the audience a little head, for a thousand dollars. Now he says he will even give you a little head, but it’ll cost you a thousand bucks. Where have I heard that before? 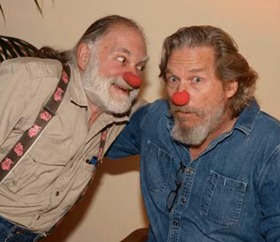 destined to help the Zen Peacemakers in their efforts, and mighty efforts they are. So while you bask in the after glow of getting a little head from the most famous Dude, but you can pat your self on the back for helping the world be a more compassionate peaceful place.

I want to tell you more about the Zen Peacemakers first, so put your wallet away for now. Bernie Glassman and the Zen Peacemakers have been a potent source for social good. They run many programs and have helped lots of Dudes down on their luck. Part of the overall Socially engaged Buddhism movement, and an important bridge between east and west for positive change. They bring Zen and it’s way of abiding into the American social arena, with an open and non judgmental way.

Their Bearing Witness programs are examples of Dudeist abiding at work, they are guided by three tenets:

Not-knowing, thereby giving up fixed ideas about ourselves and the universe
Bearing witness to the joy and suffering of the world
Loving actions towards ourselves and others

Yeah mang, these dudes know how to chill for a better world. 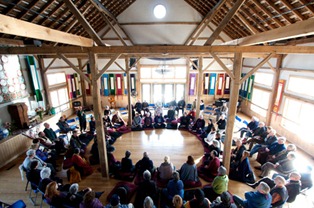 Socially Engaged Buddhism has been quietly spreading and becoming an international force for change. It’s not necessarily restricted to Buddhists, though the movement is based on the Buddhist concepts of mindfulness and abiding. Both concepts are not exclusive to Buddhism, and in those traditions labels don’t matter anyway. So you’ll find many traditions, even completely secular non-traditions, mingling and working towards a shared goal of a world more abideful. Dudeism fits right in there, of course; the Nihilists are holding the world hostage, and no Dude can let that aggression stand.

I can wholeheartedly say this here Dudeist digs the Zen Peacemakers style, and I have it on good authority that they dig the Dudeist style as well. 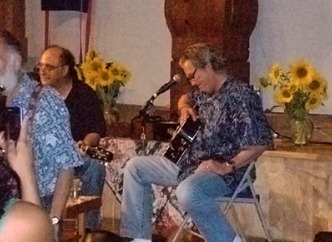 So I bet you are just about bursting with the urge to get a little head from the Dude, and save the world, in one blissful explosion. Well I am privy to some inside information, and I have had to limber up my mind to keep all strands straight. But new shit has definitely come to light. Here’s the skinny:

When (soon to be featured on American Masters) Mr. Bridges has left over ceramic from other projects, he likes to sculpt little heads with the balls of clay. They have a range of emotions, for instance: noble, pompous, frightened, singing, and masked. Bridges has long been giving these little dudes to his friends, but is now working on a book project featuring these heads. The proceeds will go to the Zen Peacemakers foundation. He will be leasing these sculptures out on a temporary basis and they come with documentation of your contribution. Here’s the cool part – every so often, Jeff said, the current holders would get an invitation to "Bring your head, let’s jam." 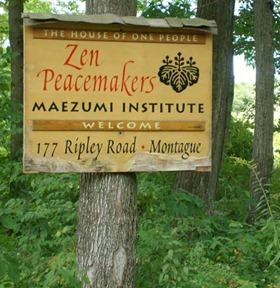 The lease will cost a thousand smackerooskis, but with the certificates, that warm fuzzy did something feeling and the possibility to go and "jam" with the Dude himself…well, yeah now I’ve go see if I can find a cash machine as well.

Watch for official announcements forth coming on "Head for Peace, Let All Eat" project from the crazy and wise mind of our favorite actor. This thing has Dudely coolness all over it. Our Zen compeers are doing the dude’s work in a way any Dudeist can admire and support. This idea has a life of it’s own, because the heads will be travelling the world changing hands, and having who knows what kind of adventures. I recommend burning a J and thinking about this while lying on your rug Dudes, it’ll blow your mind.

Even if you don’t have 1000 bones or clams or what have you laying around, check out the Zen Peacemakers and dig their style. They are true Dudeist compeers.

Previous Post: Down Through the Generations
Next Post: Interdude with ‘Two Gentlemen of Lebowski’ Author Adam Bertocci