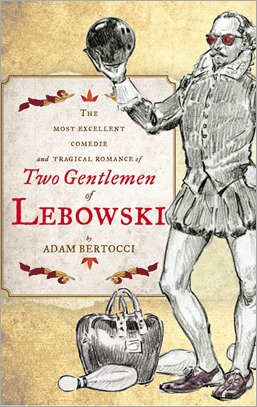 When Adam Bertocci’s Shakespearean reworking of The Big Lebowski appeared on the Interwebs in January of this year, Dudeists and Lebowskians alike were collectively stoked. Here was a masterful rendition of our holy movie as if the 16th century Bard Dude himself had written it! Sold out performances followed to rave reviews, and now it’s about to be released in book form. It hits the streets October 26, but you can pre-order it now.

We sat down with Adam in the spacious rug-lined hallways of the (virtual) Dudespaper headquarters and asked him some probing questions about his “most excellent comedie and tragical romance.”

Dudespaper: Have you been surprised by the reaction to your work? Before making such an impression with Two Gentlemen of Lebowski, what were your ambitions?

Adam Bertocci: I need to flip through the thesaurus and find a stronger word for "surprised". I designed it to be the kind of thing that would, hopefully, go viral, but so much of what happened went completely off my radar. I didn’t expect it to go viral the first day, that’s for certain, and I never accounted for the notion that it could have a life outside the Web site. Part of me entertained the fantasy that if it did go viral, some small college theatre troupe might do the show one weekend; a far cry from the theatrical run we had in New York. It certainly never once entered my mind that anyone would want a book, and if the publishing industry hadn’t contacted me I frankly would have not have bothered to contact them. 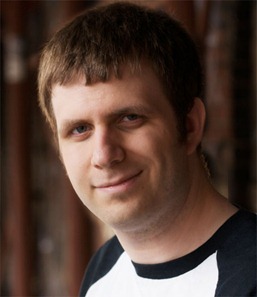 The whole reason I did "Two Gentlemen" was as a shameless publicity stunt to further my screenwriting endeavors; I thought, gee, maybe if it goes viral, some young assistant in a Hollywood office will see it, laugh, show his boss, and they’ll think, hey, this Adam guy’s got something. I didn’t see the potential of "Two Gentlemen" as a project in and of itself; it took the fans to clue me into that.

I think a lot of writers, filmmakers, artists of all sorts have reached moments where they realize that their audience views their work very differently than they do. I mean, I bet when "The Big Lebowski" itself hit theaters, all involved were assuming it would sell its tickets and go to video and that would be that, just like any other movie. But life had other plans.

Dudespaper: What is that you find most special or inspiring about The Big Lebowski?

Bertocci: I’m still discovering what’s so special about "The Big Lebowski"! But, for me, it’s the dialogue. I got into writing because I love to hear characters talk, and everyone in the movie has such a distinctive voice. Someone should do a count of how many times one character asks another, "What the fuck are you talking about?"–because in some ways, that’s the central concern of the movie. The way that characters pick up on the phrases they hear from other people is a real hoot for me.

Dudespaper: What’s your background in Shakespeare? You’re clearly in thy element. 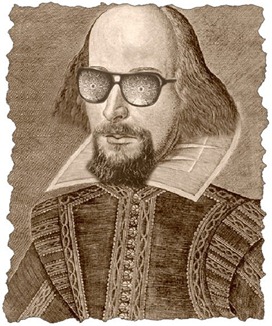 Bertocci: I’m in that strange no-man’s-land with Shakespeare–I feel I earn major points as an enthusiast but still strictly an amateur in terms of scholarship. I took a few Shakespeare courses in college; indeed, they were the reason I did a minor in English lit. And I’ve read my share of books, seen a bunch of shows and movies.

But at the same time there’s territory that I know is too highbrow for me. I think "Two Gentlemen" will educate people a bit about Shakespeare’s work and his times. But what I’m really trying to communicate isn’t facts about the Bard, it’s enthusiasm. If "Two Gentlemen" inspires a few people to check out Shakespeare on stage or on film, then I’ve done a good thing, I think.

Dudespaper: In what ways does the published version of Two Gentlemen of Lebowski differ from the original version you posted on your site originally?

Bertocci: There’s two answers to your question. The playtext itself has been revised; not deeply, but very thoroughly. It’s still very much the thing that was posted online, no added or deleted scenes, no glaring tamperings-with. But everything’s been given a spit-shine and polish. A couple of lazy translations have been reworked, scansion’s been improved. A few lines that were sort of left unaddressed from the movie have been given the proper Shakespearean twist.

I learned the hard way that it’s not a good idea to put something online that you’re not 100% proud of, even if you tell yourself, oh, it’s just a silly thing to amuse the Internet, no one’s going to care. Well, people did care, and there’s certain things in the online version I wish I’d done less lazily, and I have to live with that. 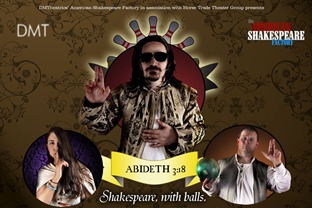 Most importantly (in my opinion, anyway), a much stronger effort has been made to stick only to words that existed in Shakespeare’s England. I mean, sometimes I cheat; I’m not doing a Lebowski book without the word "nihilist", and if a word came up just shortly after Shakespeare’s time I’m willing to fudge. And I know deep down that most readers aren’t terribly concerned about that level of detail, but, some things you just gotta make right for yourself.

The second answer concerns things in the book that are not the playtext. I was initially a little skeptical when approached about a book, because I didn’t think people would want to just buy something that they could get online for free. And even if they would, this was also my debut in the publishing industry and I wanted the chance to showcase a few of my talents beyond imitating Shakespeare. Fortunately, Simon & Schuster has been totally on board to make the book a quality project in and of itself, it stands on its own two feet independent of the project’s past. There’s 90-100 pages of historical illustrations, Shakespeare scholarship, etymology, Elizabethan bowling facts and an afterword shedding more light on the fundamental question of the text, the Shakespearean qualities of "The Big Lebowski". It’s really my last chance to answer the question about the relationship between the Bard and the Dude and I hope I’ve made it count.

Dudespaper: Are you planning to attend any of the upcoming Lebowskifests?

Bertocci: Nothing is set in stone yet, but we are in contact with the Lebowski Fest guys, who have been very kind vis-a-vis this project, so who knows–and if you don’t see me at one in my official capacity as the "Two Gentlemen" guy you just might see me as a private citizen enjoying his coffee, enjoying his coffee. I’ve actually always wanted to go to one, and now I have no excuse. I just hope no one will judge me on my bowling skills. 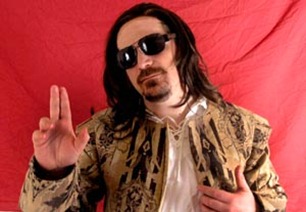 Bertocci: My favorite scene in the movie… do you know that no one’s ever asked me that? It kind of shuffles around. Right now my answer would be the first scene between the Dude and Maude, partly because I’m on a Julianne Moore kick, and partly because I like the sense it conveys that the Dude is really getting out of his element, meeting all sorts of strange new people and going on tangents he can neither explain nor predict; that "anything can happen" feel.

As for "Two Gentlemen", my favorite scene is the epilogue. Something just came together very beautifully for me in that; Sam Elliott’s words fit into iambic pentameter and rhyme without much effort, and I’ve always been fond of the Shakespearean epilogue, in the plays that have them.

I think that’s what makes this project work. It began as a joke, an oh-wouldn’t-it-be-funny-if idea, but when I sat down and actually did it, I was amazed at how well the film fits into certain Shakespearean molds. That all comes from the movie, I didn’t have to stretch to find it. That was an amazingly lucky discovery on my part. If I’d thought to do this with any other film, I’d probably just have an amazingly unfunny pile of movie lines with thee’s and thou’s thrown in. 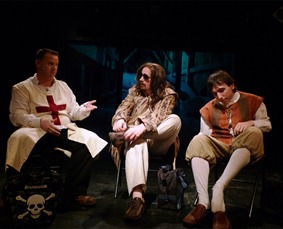 Dudespaper: What projects are you planning to work on in the future?

Bertocci: I’m one of those guys who tries to keep a lot of plates spinning. I think it’s important to always have a project in the pipeline.

I shot a short film over the summer and that’s going out to festivals now. And I hope once the smoke clears from "Two Gentlemen" I can dust off the screenplays I was trying to promote to Hollywood, and make another run at that, now that I have achieved a little bit.

But "Two Gentlemen" gave me more than just a publicity boost, it opened my eyes to new markets. Books, for instance. I’d love to write some non-fiction about movies, criticism and analysis and the like (gotta use that film degree!) and maybe now that door is open to me.

And plays. It never in my life occurred to me to write a play, and then "Two Gentlemen" happened pretty much by accident. Well, I am writing a new play–and Shakespeare is involved. But best to preserve a little mystery on that front…