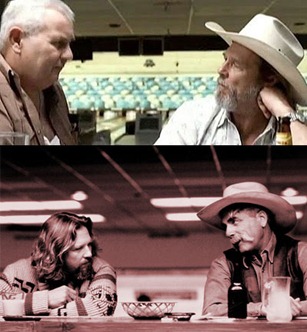 Hey maybe we’ve been smoking too much Thai stick over here at the Dudespaper editorial offices, but there sure seem to be a lot of nods to The Big Lebowski in Jeff Bridges’ latest movie, Crazy Heart.

The good Rev. Hieronymous Moondog pointed out a few in a recent column, and we’d like to review those and add a few more. Let us know in the comments section below if any of you fellers wiser than ourselves have noticed any other literal connections between the two films.

1. The opening scene in the Bowling Alley

Not only does Bad Blake play his first gig in a bowling alley, but the shot of our heero sitting at the bar, talking to a concerned older feller next to him as he attempts (unsuccessfully) to drown his sorrows…wal, there’s surely a serious literal connection to Dude’s scene with the Stranger. It’s shot exactly the same way, our hero is similarly irritable, and he’s wearing the Stranger’s cowboy hat. The whole thing is like one big acid flashback, is it not?

When the young guitarist says “We need to get the leads down", Bad Blake responds with an incredulous “Leads?” Leads! Bad Blake is obviously channeling the hysterical Latino policeman who can’t believe the Dude would expect the LAPD to follow up on who stole his car. 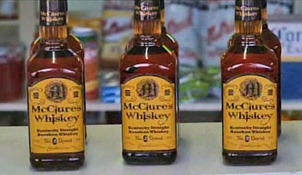 When Bad Blake runs out to vomit in a trashcan, his sunglasses fall off and he’s forced to shake off the spew. Moreover, he does it almost exactly the same way that the Dude does after his own shades fall in the toilet when he’s attacked by the Treehorn thug in the opening scene. Once he’s got his shades on again, he regains his cool. Also, his shirt’s all wet. 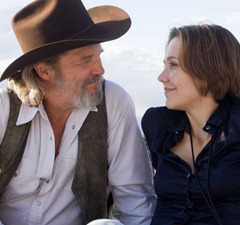 4. Insists on a Pseudonym

Goes by a name different than the one his lovin’ parents gave him. “Name’s Bad Blake. When I die my tombstone will have my real name on it. Until then I’ll just be Bad.” Contrast this with “I’m the Dude, so that’s what you call me. That, or Duder, His Dudeness or El Duderino if you’re not into that whole brevity thing.”

Jeff Bridges put on a lot of weight for the role of Bad Blake. The only other movie where he fattened himself up was The Big Lebowski. Probably ate In-N-Out burgers every day to prepare.

When Bad Blake is out fishing with Robert Duvall’s character, he asks him for a “barley pop.” As the Dude, he gave beer a similar affectionate nickname: “oat soda.” We wonder what else they might have chosen. “Wheat fizz”? “Carbonated bread”? “Yeasty-cola”? Incidentally, John Goodman called beers “oat sodas” long before his role as Walter in The Big Lebowski. He may have even coined the term. 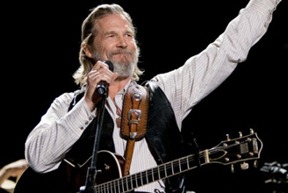 7. Funny how fallin’ feels like flyin’, for a little while

The lyrics in song he sings when he opens for Colin Farrell’s character is clearly a reference to the Dude’s first dream sequence – he flies over Los Angeles and then finds that he’s falling to the ground at high speed.

After Bad Blake gets clean and sober, he performs in Robert Duvall’s bar while seated on a stool under which is a beautiful red Persian rug. Really tied his life together, did he not?

10. No Interest in Raising a Child

In some ways Bad Blake is like the Dude a couple decades in the future, if he lost control of his drinking. He had no interest in raising a child while in his forties, but in his sixties he wishes he’d not abandoned his son and tries to reach out. The little Lebowski doesn’t want anything to do with him, sadly. 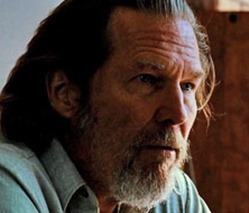 11. Career’s Slowed Down a Little

In many ways Bad Blake can be seen as the dark side of the Dude. If the Dude wasn’t so easygoing and egoless he might have ended up like Bad Blake – a bitter alcoholic who resents the world and wishes he had made different choices. The Dude had a promising career in college (Seattle Seven, The Port Huron Statement) and then, like Blake, got into the music business (sort of), only to see his life pass him by without any recognition or success. It’s only Bad Blake’s ego, emotional frailty and self-absorption that makes him so unhappy and frustrated. Dude and Bad are like two paths that diverge in the wood. One can choose to take the road less rambled and enjoy the walk, or otherwise get lost in a very dark place.

Any more Crazy Heart/Lebowski parallels? Please put them in the comments below!