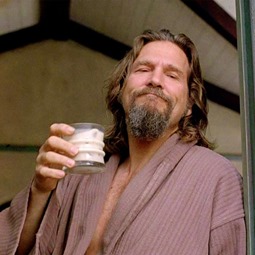 By: Rev. Michael A. Emero

So do you want to be happy? Most people would probably say yes to that. But can you list off even three things you did today to ensure that happiness? I doubt it. Most people say things like, “I don’t have the time, money, or know-how.” With that in mind, here’s a zero cost, nothing to lose three step plan to bring happiness into your life. A challenge, if you will, to those who want to put their Caucasian where their mouth is, and learn to abide in joy.

1. Work smarter, not harder.
You can’t control the world. And really, who’d want to, besides Dr. Horrible? I mean, it’s a mess. But you can be smarter about the choices you make everyday. Whether it’s packing your lunch the night before, getting up or leaving ten minutes earlier, getting work done before it’s due, or just not staying up till 2am when you have to be up at 6am, odds are you can treat yourself better and lower your stress with minimal effort. It might seem tough to stop being lazy, but honestly it’s only tough the first couple times. Then it’s a (good) habit, and you’re guaranteed be happier for it. 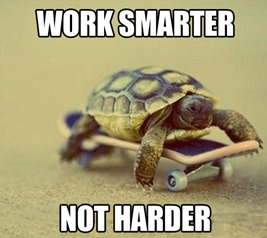 2. Chill out, man, and enjoy the moment.
You’re driving to work and the guy in front of you is going ten miles under the limit- for twenty miles. Like most people, I used to get all self-righteously pissed off. Which would lead to an overall ‘bad day’ as soon as anything else inconvenienced me in the slightest. It’s justified because that’s how most people handle it, right? Then I thought about it. How does that make any damned sense? Why do I want to subject myself to lasting anxiety and frustration, all because someone I don’t even know fails to meet my expectations? That’s pretty shitty, to myself and them. We’re two human beings, neither is more important. Now I put something good on the radio, turn it up, and before I know it grampa’s gotten out of my way. Absolutely nothing different happened except one me making a simple mental choice. However I get to my destination smiling, instead of chewing nails. Shiny!

3. Shut the fuck up, Donny.
These days we live lives of so much luxury, and yet we whine about the tiniest inconveniences. 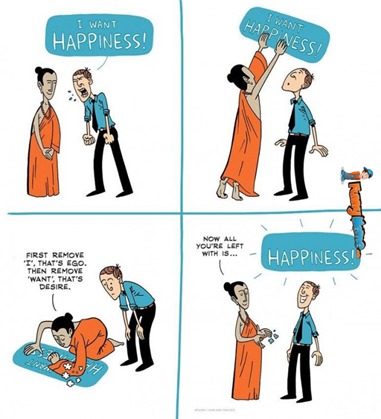 We can’t even wait more than ten seconds for a computer to load anything. We no longer want to put forth the effort to cook a decent meal, yet we flood social media with all our first-world-problems. C’mon, we have the technology to reach people on the other side of the world instantly, and we use it to spam about how our fucking latte wasn’t made right? Some people think Buddha said, “life is suffering.” In reality, he said life is ‘dukkha’- Sanskrit for anything temporary, including suffering AND happiness. Everything in life passes, even the worst stuff. And guess what? The bad shit passes even quicker when we stop fixating and let it. Or better yet, pay attention to the good stuff instead. Which makes a lot more sense if your goal is happiness, right?

Folks, your emotions don’t rule you. They’re an instinctive first reaction, but sometimes a negative one that can do us a disservice. The more you understand your emotions and allow yourself a few seconds to think things through logically, the fewer regrets you’ll have, and the less your calm will be damaged. When it becomes a habit, then you’ll become known as a laid back, even-tempered, cool cat. Doesn’t that sound nice? Great job, man. Give yourself an extra splash of Kahlua, on me. Till next time…cheers.

Previous Post: Because What’s A Hero? In Defense of Slackers
Next Post: Dead-stroke: The Tao of Pool