"Dude" is a name Mark Twain probably would not have self-applied in his time and place. Back then in the Wild West where Twain once abided, a "dude" really was some kind of eastern thing. There was an air of pretense around the word, a lack of authenticity. Think of a metrosexual male today sporting a new pair of designer cowboy boots.

Yeah, it was that bad.

But in the parlance of Dudeism today, Twain most definitely qualifies as a genuine Great Dude in History. In fact, he not only epitomizes the American Dudeist ethos — he dang near originated it.

Much can be said of his life of achievement. If you were half awake in English class, you probably know that Twain’s classic story of a slacker named Huck takin’ er easy on the Mississippi revolutionized American literature. Not exactly a lightweight. But as an enduring icon of all things Dude, he also embodies Dudeism’s most noble virtue: he was a lazy man, high in the running for laziest worldwide, in fact. 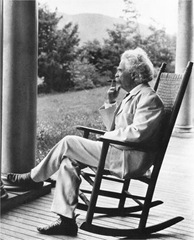 "I am no lazier now than I was forty years ago," he observed late in life, "but that is because I reached the limit forty years ago. You can’t go beyond possibility."

Twain was indeed a pioneer in American indolence. Long before hippies tuned in, dropped out, and flocked to San Francisco in the 1960s, Mark Twain turned his back on uptight Victorian society and lit out for the territory a way out West in the 1860s. There, he tumbled around like a tumbling tumbleweed, living the life of a sagebrush bohemian: prospecting for gold he never found, hanging around with his eccentric pals, knocking back quite a few oat sodas. Keepin’ it real.

And like Donnie, Twain was a surfer — probably the first white guy, in fact, to surf the beaches of Hawaii. In his book Roughing It, Twain described his attempt at what was then called "surf-bathing":

In one place we came upon a large company of naked natives, of both sexes and all ages, amusing themselves with the national pastime of surf-bathing — I tried surf-bathing once, subsequently, but made a failure of it. I got the board placed right, and at the right moment, too; but missed the connection myself. The board struck the shore in three-quarters of a second, without any cargo, and I struck the bottom about the same time, with a couple of barrels of water in me. 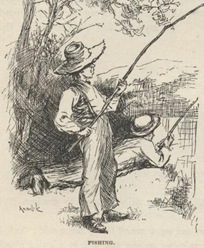 Looking back on his days hanging out with nude natives in Hawaii, sunning himself under palm trees all day, "no more troubled by his conscience than a butterfly would," Twain extolled a truly Dudeist way of being, one where "you are safe from the turmoil of life; you drowse your days away in a long deep dream of peace; the past is a forgotten thing, the present is heaven, the future you leave to take care of itself."

But Twain wasn’t a hee-ro, cause what’s a hee-ro? Like most of us, he was often torn between his freewheelin’ bum side and his ambitious drive to feed the monkey. Nothing changes. However, regardless of the strikes and gutters the cosmic bowling alley rolled his way, he continued to abide. And in his stories that make us laugh to beat the band, he always reminds all us sinners to just take it easy, man.

In America, we hurry — which is well; but when the day’s work is done, we go on thinking of losses and gains, we plan for the morrow, we even carry our business cares to bed with us…we burn up our energies with these excitements, and either die early or drop into a lean and mean old age at a time of life which they call a man’s prime in Europe…What a robust people, what a nation of thinkers we might be, if we would only lay ourselves on the shelf occasionally and renew our edges!

In these uncertain times when our sagging edges could use some renewing, we can take comfort in that, Dudes — which is why we are such enormous fans of yours, Mr. Twain. On a personal level, your life and writing remain truly a source of Dudeist inspiration.