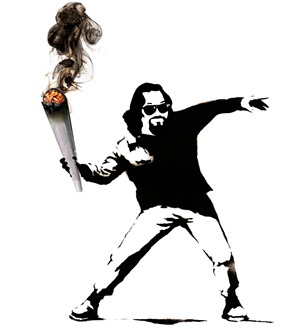 A Dudeist Take on the Occupy Wall Street What-Have-Yous

As the world’s slowest growing and laziest religion, it may appear as though Dudeism is really behind the times.

To the square community that doesn’t give a shit about us, we’re just a bunch of aging hippies and Phish fans who have shaked-and-baked our consciousness a little too long and are now wandering lost in some kind of out-of-touch, purple hazy thing from the past.

This prejudice is captured well in our Sacred Source, The Big Lebowski, when the millionaire Lebowski shouts at the Dude that his ‘60s revolution is over and the bums lost.

But like the Dude, we can’t worry about that shit, man. We know that when we follow the Dude-way, however out of step we may appear to some reactionaries, we always fit right in there as the folks for our time and place, no matter what the times may be. 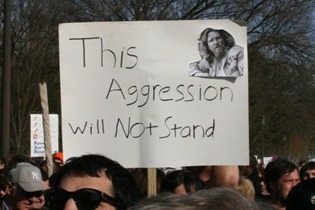 A pertinent example of this quality today is the Occupy Wall Street protests.

They were initially dismissed as a bunch of bongo-banging, weed-toking deadbeats by the uptight square community.

Not that there’s anything wrong with either activity, that’s not what these demonstrators, or the other 99% of the country wondering where the fucking money is, are all about.

In fact, the dudes occupying Liberty Plaza (or Zucotti Park, in the parlance of the so-called owners of the area) have a basic ethos very similar to the Diggers we write about in our Abide Guide’s section on Dudeist movements throughout history: 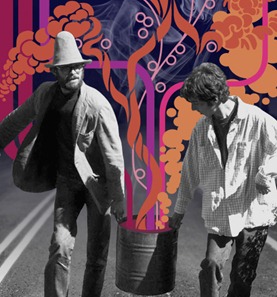 Back in their respective frames of reference, the Beat and hippie movements were considered the cutting edge of what’s hip, cool, groovy, and what-have-you. Now they’ve been reduced to cartoonish stereotypes, largely dismissed as laughable retro deadbeats.

What happened? Well, in both cases corporate consumer culture co-opted the familiar images of countercultural rebellion and neutralized their subversive substance.

That’s probably why we don’t hear much about the Diggers these days. This anarchist collective of artists, poets, and actors weren’t hung up on making fashion statements, but they were all about living out a subversive countercultural ethos.

Appearing in San Francisco’s Haight-Ashbury district in 1966, the Diggers took their name from a group of radical farmers who rejected money and private property in 17th century England. The San Francisco Diggers revived the original Diggers’ spirit in their time and place by rejecting a modern system consisting of “those who would kill us through dumb work, insane wars, [and] dull money morality.” 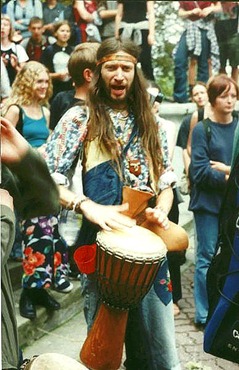 Unlike the Utopians, though, the Diggers didn’t seclude themselves in serene, bucolic settings where they sat around jerking off manually. They took their revolutionary, laid-back vibe directly to the streets of San Francisco and created new ways to provide free healthcare, free food, and free clothes to anyone who needed them while staging free community concerts and street celebrations.

Unlike with the Beats and hippies, the Man couldn’t absorb the potency of the Digger movement, which is why it’s largely forgotten today by official history. But with all the new shit involving dumb work, insane wars, and dull money morality coming to light in our society today, perhaps the time is ripe for a new generation to dig the Diggers again.

Now, not that we’re bragging or anything, but for some time now we in the Church of the Latter-Day Dude have been calling for a new movement to help all us uptight, downsized, single-minded, multi-tasking, overworked, underpaid, plugged-in, pissed-off, shit-on, run-down, zoned-out sinners out there in a world gone crazy to just take it easy, man. 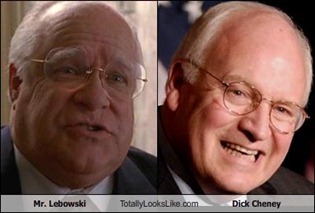 Although such blathering have often led the Big Lebowskis of the world to dismiss us as lazy bums who are sadly behind the times, maybe we Dudeists are really far ahead of our times like those neutrinos that are supposedly faster than the speed of light. If we understand the quantum mechanics correctly, when you’re that far ahead of the accepted reality, you actually appear to be moving backwards in time.

The Dude of Film, Jeffery Lebowski, wrote the uncompromised draft of The Port Huron Statement. The Dude of History, Jeff Dowd, was part of the anti-war Seattle Seven in the ‘60s… and now he’s part of the 99% today. 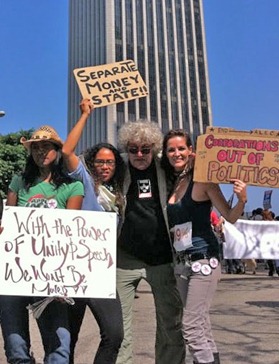 Grooving light years ahead of our time, we’re still always able to fit right in there no matter what time and place it is.

The Dudeist impulse is always out there taking ‘er easy and reminding us all that a Duder world is always possible.

As we point out in The Abide Guide, even when it appears as though the bums did lose, that’s just the stress talking. No need for condolences just yet.

What happened during The Sixties and early ‘90s wasn’t just confined to those times and places. The Dude spirit that emerged then abides throughout time, sometimes going underground, sometimes shaking the foundations, but always keeping the whole human comedy perpetuating itself down through the generations.

It’s there in our basic human need to belong to inclusive communities where everyone is free to share some burgers, some beers, a few laughs, and whatnot. 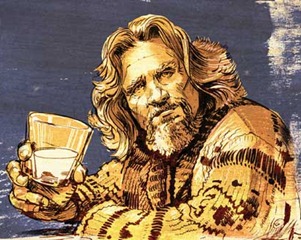 It’s there in our fragile yearning for peace and our desire, regardless of whether you have a pair of testicles or not, to do the right thing, whatever the price.

It’s there in the vision of a free society that (SDS co-founder) Tom Hayden and Jeff Dowd lived out, the one that says it’s not as important to get one’s way as it is to create a truly meaningful way that is one’s own.

That’s what the Dude did, even when he was working as a roadie for a bunch of assholes. He always followed a path that was his own. He rejected the radical extremism of the New Left as much as he rejected the grey flannel conformity it sought to liberate. 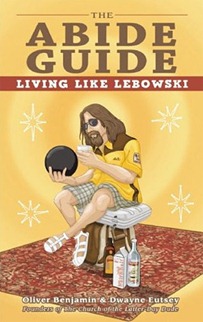 Amid life’s strikes and gutters, through all his bowling, driving around, and occasional acid flashbacks, the Dude always had the courage to remain true to his deepest, abiding humanity. In a world where political and economic systems that are supposed to serve humanity end up trying to control, exploit, and even crush our humanity, that’s a revolutionary act.

When we follow our own Dude-like paths, we ensure that revolution is far from over.

We have taken comfort in all the many Dudes who have abided before us in their times and places and shown us that a Duder world is possible.

If you live it, dudes, it is no dream.

[Excerpts from The Abide Guide reprinted with persimmon]