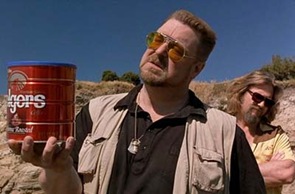 Few have noticed it, but coffee plays a big part in The Big Lebowski. Perhaps even more so than the more obvious nine White Russian cocktails The Dude imbibes during the course of the film.

1) In the first place, White Russians are prepared with Kahlua, a popular coffee liqueur. The White Russians, incidentally, were the side that got creamed in the Russian revolution of 1917 by the Red (communist) Russians. 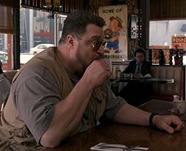 2) In the coffeeshop scene, Walter conflates coffee with freedom. After ranting about freedom of speech, which impels the Dude to storm off, Walter maintains: “I’m staying. Finishing my coffee. Enjoying my coffee.” It is one of Walter’s more memorable mini-manifestos — as well as a pointless invocation of civil rights.

3) The police chief of Malibu throws a coffee mug (in the screenplay it’s full of coffee) at the Dude’s forehead after the Dude acts impertinent. Ow! Fucking fascist. 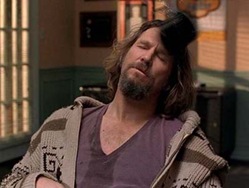 4) After refusing to pay the outlandish price for even their “most modestly-priced receptacle” to transmit Donny?s ashes, Walter secures a Folger’s coffee can to do the job. After which, he screws things up (again) and flours the Dude with the cremains of their dead friend.

What’s the connection tying all these caffeinated crystals together? Well, there’s not a literal connection. Face it, there?s no connection. I suppose we could cook up some harebrained theory that coffee is a drink of violence, revolution and death, which would be fucking interesting, but the story would be ludicrous. It would bump us into a higher hack bracket. 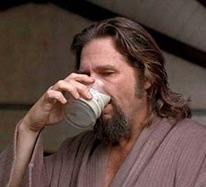 Still, beverages play a unusually important role in the film — from the Dude’s first appearance where he sniffs the half-and-half, to the final scene where he snags two “oat sodas,” after which the Stranger’s last words are to the barman: “You got any of that good sarsaparilla?” One has to wonder if the motif of drinking might not in fact be a key to better understanding the film? Those interested in investigating this hypothesis are hereby advised to drink a lot of Caucasians, oat sodas, coffee and sarsaparilla while doing so. For research purposes. Oh, and Slice too. Donny drank Slice. Which was a really great soda. But they don’t make that anymore. Ebay? 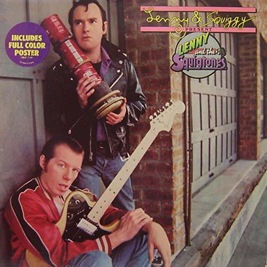 Incidentally, this isn’t the first time a Folger’s can has been employed in a hilarious manner in popular culture. In 1979, Lenny and the Squigtones (a band consisting of Michael McKean and David Lander, a.k.a. Lenny and Squiggy from the 70s sitcom Laverne and Shirley) released an album on which Lander played an instrument called the “squigophone” — basically a bongo made out of three small empty cans of Folger’s. Face it, Folger’s is fucking funny.

Furthermore, one of the most insanely odd commercials of modern times was perpetrated by Folger’s in the interest of creating viral interest on the Internet. You can see it here. It’s hard to believe it was created by such a frumpy old corporation as Folger’s, but kudos to them for trying to keep their product limber.