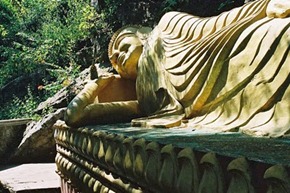 We Dudeists here at the old Duder Bar have been incommunicado for awhile because of all the mulling about and intense ruminating that has gone into our latest project, a small booklet entitled LAZY WISDOM: PROCRASTINATION AS SPIRITUAL PRACTICE, but I’m going to wait to elaborate further on that until a little later on. First, I want to bring to light a couple of fellers you may have heard about but, if not, will probably get a kick out of…natural born Dudeists both, and both probably sympathetic with our current frenzied quest for the key to profound procrastination. 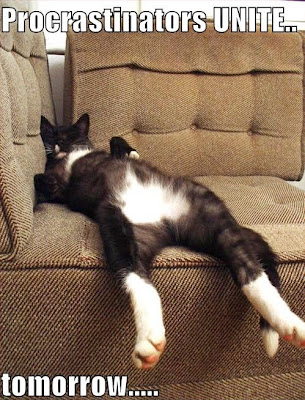 The first, Wes “Scoop” Nisker, is a writer, radio personality, Buddhist meditation teacher and stand-up philosopher who, years ago, came up with the challenge, "If you don’t like the news go out and make some of you own." Interesting concept. Anyhow among the books old "Scoop" is notorious for are CRAZY WISDOM, THE ESSENTIAL CRAZY WISDOM, and, most recently, CRAZY WISDOM SAVES THE WORLD AGAIN! Here’s a quote from this last tome that speaks directly to our current cogitations as well as to the Dudeist modus operandi in general.

“If I were in the department of wisdom, I would call for an immediate moratorium on progress, to last at least a half-century. We had a whole lot of progress in the last couple of centuries, and although it brought us pain-killing drugs, space telescopes, and Velcro®, it appears we can no longer keep up with our own ingenuity. We now race madly around in our individual boxes of steel, chasing after satisfaction, and in the process we are throwing the atmosphere out of whack by burning up two or three geological epochs worth of the sun’s stored energy in one great choking bonfire of the vanities. We have spent the better part of our genius figuring out new ways to blow each other up or learning how to go faster, and in our fear and haste we forgot about who we are and where we are going. We need to relax, deeply, and let our hearts and minds catch up with out tool-making ability, which ha gotten way “out of hand.” What we need is a century of less doing and more “being.” The next revolution is a big slowdown."

“I also have some broad suggestions on how we might help heal our sick civilization and the ailing planet, based on the understanding of crazy wisdom, a long-running tradition of tricksters, saints, philosophers, self-proclaimed fools, and other disreputable characters, Rather than practical solutions, crazy wisdom offers a stance, an attitude to carry us as we proceed through these ominous days."

The other feller I want to call your attention to, name of Thaddeus Golas, wrote a 79 page book 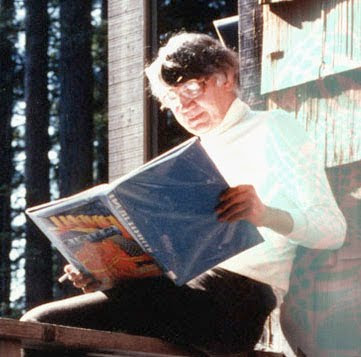 back in the late 60’s called THE LAZY MAN’S GUIDE TO ENLIGHTENMENT which was an instant hit at that time. Here’s what Amazon has to say…

"Originally published by the author in 1972, the underground classic Lazy Man’s Guide to Enlightenment teaches how to improve the quality of life, to feel good, and to determine what’s real."

And from an Amazon reviewer…

"I’ve never been interested in having a guru, and Thaddeus Golas was never interested in being one. He wasn’t looking for converts, followers, or even agreement, and I’ve always felt free to disagree with the way he makes this or that point. So this book has long been perfectly suited to me and my somewhat iconoclastic/refractory temperament." 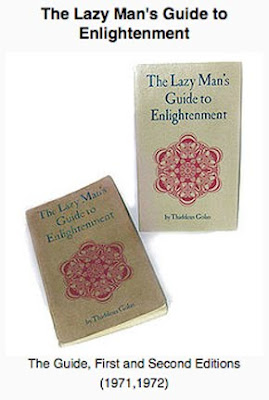 "This little book is one of a very small handful that I regard as the absolute cream of ‘hippie spirituality’. Stephen Gaskin’s ‘This Season’s People’ is that literature’s Diamond Sutra and Paul Williams’s ‘Das Energi’ is its Tao Te Ching. Golas’s slim volume comes very close to Gaskin’s in its adamantine wisdom and so ranks as a close second in diamond-sutrahood, but I think of it as something like the Dhammapada."

"Its message is so easy to put across that, technically, you already know everything it says. The heart of the matter is: relax; just love as much as you can from wherever you are. When you come right down to it, you’re already ‘enlightened’ and you don’t have anything to prove."

"But somehow, the ‘way’ Golas puts this message (and the bit about "love as much as you can" is a direct quotation) has some major mojo in it, enough to knock your mind loose from your brain."

A selection of reminders from the text (abbreviated):

Whether I am conscious of it or not, I am one with the cause of all that exists.

Enlightenment doesn’t care how you get there.

Whatever you are doing, love yourself for doing it. 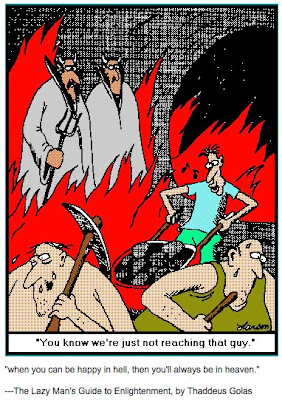 There is nothing you need to do first in order to be enlightened.

This, too, can be experienced with a completely expanded awareness.

I wouldn’t deny this experience to the One Mind.

When you learn to love hell, you will be in heaven.

And so fellow pilgrims, enough of homage…time to move on down the line toward LAZY WISDOM: PROCRASTINATION AS SPIRITUAL PRACTICE…or…

“Procrastination isn’t the problem. It’s the solution. It’s the universe’s way of saying stop, slow down, you move too fast. ”
Ellen DeGeneres

“Never put off until tomorrow what you can do the day after tomorrow.”
Mark Twain

“I love deadlines. Especially the whooshing sound they make as they pass by.”
Douglas Adams

“Procrastination is the art of keeping up with yesterday.”
Don Marquis

“The sooner I fall behind, the more time I have to catch up.”
Unknown 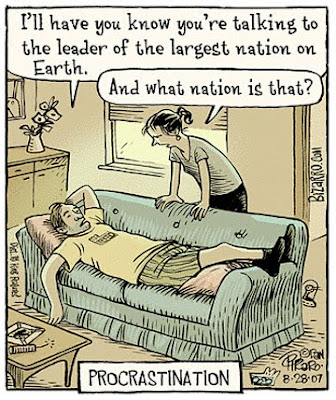 “Anyone can do any amount of work, provided it isn’t the work he is supposed to be doing at that moment.“
Robert Benchley

“The two rules of procrastination: 1) Do it today. 2) Tomorrow will be today tomorrow.”
Unknown

“Work expands so as to fill the time available for its completion.”
C. Northcote Parkinson

“Only Robinson Crusoe had everything done by Friday.”
Unknown

You know what? I think that by now…if you’ve gotten this far…that you all figure that you’ve read enough of my scribbling for one day, so I’m going to hold off on presenting any more from the Duder Bar Symposium on Lazy Wisdom till next time.