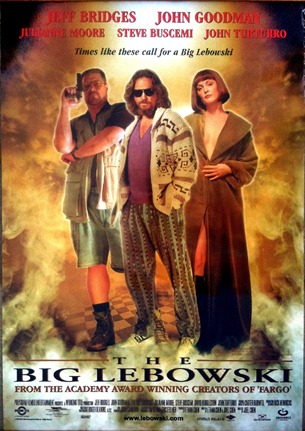 As we all know, The Big Lebowski was a flop. In and out of theaters in two weeks, most moviegoers and critics thought the Coens had lost their mojo.

Apparently the marketers had a hard time with it as well. The official tagline “Times like these call for a Big Lebowski” made no sense at all, since The Big Lebowski was the villain of the film.

The official website, formerly located at lebowski.com was a bit odd as well. Recently this rough gem of 1990s web design and surreal copywriting was unearthed over at archive.org (where websites go to die).

Most of the images are not working, and it’s hard to navigate, so we’ve pasted all the text for you (complete with copious typos) and images of the working pages in this article, together with some comments of our own. Enjoy!

Ol’ crusty over here came out of a bad Tom Mix movie with some sage advice for yours truly, the Dude.

I mean, like who the hell wears a handlebar moustache, and a ten gallon hat in Los Angeles and isn’t gay?

So, I take it that Life is delivering some kind of valuable insight into my present situation in the form of a sasparilla – drinking cool hand luke ready to help me along and simplify my methodology with his t.v. cowboy wisdom.
Whatever.
The Dude abides.

[Editorial We’s Note: Perhaps to emphasize the lazy nature of the Dude, this page had a relaxed attitude towards spelling and capitalization. Remember, spell-check wasn’t what it was today back in ‘98. Also, aside from the Village People, we did not know that gay Los Angelenos are partial to cowboy garb. What’s more, let’s hope this wasn’t the Dude’s interior monologue upon meeting the Stranger. That would have been very uptight and undude.] 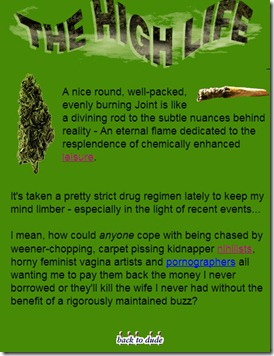 I am not the Big Lebowski.
I am not Jeff Lebowski.

I mean, I AM Jeff Lebowski but I am KNOWN as THE DUDE…or Duder. His Dudeness…Or "El Duderino," – if you’re not into the whole brevity thing.

I bowl. I drive around. I enjoy the occasional acid flashback.

I have a pretty good time at the lanes with my friends, Walter and Donny. I live in Venice, California. There’s not much more to it than that.

I’d tell you about the last couple of days but I just don’t have the energy. Suffice it to say that a case of mistaken identity has thrust yours truly, The Dude straight into a spiralling parallel universe full of complete jerkoffs.

None of these people bowl. What good are they?

Listen, you never really know where you’re going. One night you could be minding your own damn business, savoring a nice cold White Russian, smoking a fat one and the next thing you know, somebody’s in your living room, pissing on your rug and making demands.

Damn, that rug pulled the whole room together.

[Editorial We’s Note: “None of these people bowl. what good are they?” – Even at his most irritated, that doesn’t seem like something the Dude would say. Perhaps the Kalifornia kop spelling is some sort of allusion to fascism, but it might just be that shitty 1998 spellchecker again.]

A nice round, well-packed, evenly burning Joint is like a divining rod to the subtle nuances behind reality – An eternal flame dedicated to the resplendence of chemically enhanced leisure.

[Editorial We’s Note: The best part of the entire website. NORML should adopt the first paragraph into its promotional materials.]

Bowling is the sport of the social American and has remained unchanged for millions of years. It is the hallmark of advanced civilization.

On a nightly basis, me and my friends Walter and Donny arrange our problems and metaphysical contradictions into neat rows and knock the hell out of them.

It’s like the whole of human existence compressed into a sixty by three and a half foot lane. Ins and outs – You’re either in the gutter or you’re hefting a perfectly hooking ball into the 1-2 pocket for a clean, loud strike.

All the girlfriends in the adjoining lanes are watching you. You don’t even bother to stand and watch the aftermath – you know all the maples are gone.

[Editorial We’s Note: We’re pretty sure bowling has changed in the last million years, but we’ll have to check with our accountant. Secondly…what girlfriends in the adjoining lanes?]

The Big Lebowksi and his daughter Maude are two universes that make absolutely no sense when held next to each other, totally unlikely on the face of it.

The Big Lebowski belongs in the air gun department at Walmart.

It arouses me to think of Maude Lebowski lacing up a pair of rented bowling shoes.

[Editorial We’s Note: Not sure the Big Lebowski would ever set foot in a Wal Mart, and since Chuck Heston and the Reagans were his pals, it’s safe to say he’d probably have guns with real bullets in them. There was no indication that Maude was a nihilist, but we agree that she’d look hot in rented bowling shoes and nothing else.] 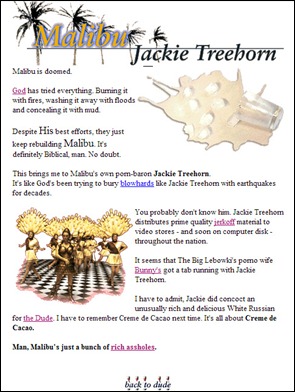 God has tried everything. Burning it with fires, washing it away with floods and concealing it with mud.

This brings me to Malibu’s own porn-baron Jackie Treehorn.

You probably don’t know him. Jackie Treehorn distributes prime quality jerkoff material to video stores – and soon on computer disk – throughout the nation.

I have to admit, Jackie did concoct an unusually rich and delicious White Russian for the Dude. I have to remember Creme de Cacao next time. It’s all about Creme de Cacao.

[Editorial We’s Note: Crème de Cacao? What the fuck are you talking about?]

I might be wading a little deep here but like, the way I see it, the Nihilists live by an unstable collocation of brute facts, rapacious scepticism all to the beat of inexplicable, purposeless and absurd electronic music; they believe in nothing.

It’s like the obliteration of the world in the sense of a meaningful and familiar "totality," … a dumb and massive plenitude without form or direction. Assholes.

You give these vampires a wide enough berth and they’ll cut your weener off for a quarter.

[Editorial We’s Note: Digging the vocabulary here: collocation, rapacious, plentitude. But if the Dude knows such complex words, why does he misspell “wiener”? Even Larry Sellers could spell that one. Also, the nihilists may have been violent but they weren’t cheap – they were going to cut his wiener off for a million dollars.] 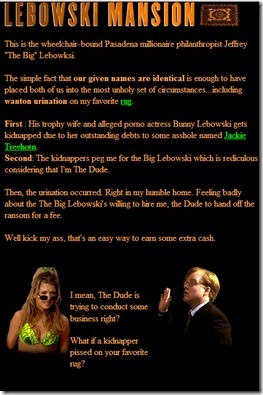 This is the wheelchair-bound Pasadena millionaire philanthropist Jeffrey "The Big" Lebowksi.

The simple fact that our given names are identical is enough to have placed both of us into the most unholy set of circumstances…including wanton urination on my favorite rug.

Second: The kidnappers peg me for the Big Lebowski which is rediculous considering that I’m The Dude.

Then, the urination occurred. Right in my humble home. Feeling badly about the The Big Lebowski’s willing to hire me, the Dude to hand off the ransom for a fee.

Well kick my ass, that’s an easy way to earn some extra cash.

I mean, The Dude is trying to conduct some business right?

What if a kidnapper pissed on your favorite rug?

[Editorial We’s Note: Our mind is not limber enough to make sense of the fifth paragraph.] 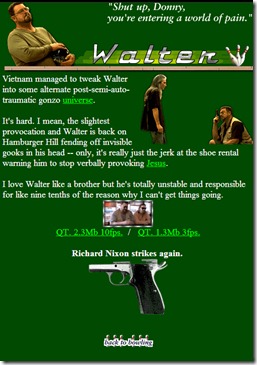 It’s hard. I mean, the slightest provocation and Walter is back on Hamburger Hill fending off invisible gooks in his head — only, it’s really just the jerk at the shoe rental warning him to stop verbally provoking Jesus.

I love Walter like a brother but he’s totally unstable and responsible for like nine tenths of the reason why I can’t get things going.

[Editorial We’s Note: Maybe they cut the scene with the shoe rental guy warning him to stop provoking the Jesus? One wonders what sort of magical apocrypha ended up on the cutting room floor.]

Listen…the comfort and aesthetic harmony that the right carpet can bring to your life is major stuff.

My rug is really the root to my recent situation…

I’m at home one night, with my carpet, just living my life when these goons came bursting into my house making demands and threats –

Claiming that I am the millionaire philanthropist, Jeffrey Lebowski aka. The Big Lebowski whose wife Bunny owes them a bundle.

One of Jackie Treehorn’s toilet thugs urinated on my rug. …pissed on my rug with impunity…to get me to pay up.

I’ll give these rug-pissers one piece of credit, they know the one way to get to the dude:through his carpet.

The most famous carpets are Persian. My carpet is Persian, right? Modern day Persia is now called…Iraq. This Saddam guy feels like he got his rug pissed on by George Bush. I don’t blame him though I’m not sure why.

You see what I’m getting at? At the heart of every righteous conflict there’s a carpet.

That thing tied the room together so well…

[Editorial We’s Note: Modern day Persia is not called Iraq, it’s called Iran. Then again, the Dude got the Lenin quote wrong, so maybe the writers were screwing around?] 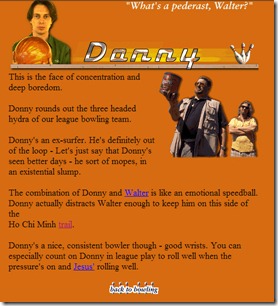 This is the face of concentration and deep boredom.

Donny rounds out the three headed hydra of our league bowling team.

Donny’s an ex-surfer. He’s definitely out of the loop – Let’s just say that Donny’s seen better days – he sort of mopes, in an existential slump.

The combination of Donny and Walter is like an emotional speedball.

Donny’s a nice, consistent bowler though – good wrists. You can especially count on Donny in league play to roll well when the pressure’s on and Jesus’ rolling well.

[Editorial We’s Note: Donny in an existential slump? That had not occurred to us, Dude. Probably because Donny was pretty happy go lucky the last times we saw him, even with Walter tearing him a new asshole every five minutes. As far as we can tell, his existential slump occurred only when he ceased to exist.] 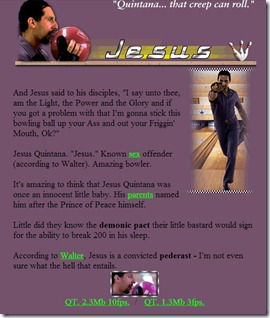 And Jesus said to his disciples, "I say unto thee, am the Light, the Power and the Glory and if you got a problem with that I’m gonna stick this bowling ball up your Ass and out your Friggin’ Mouth, Ok?"

It’s amazing to think that Jesus Quintana was once an innocent little baby. His parents named him after the Prince of Peace himself.

Little did they know the demonic pact their little bastard would sign for the ability to break 200 in his sleep.

According to Walter, Jesus is a convicted pederast – I’m not even sure what the hell that entails.

[Editorial We’s Note: This points to an interesting notion: maybe the Jesus wasn’t a convicted sex offender? Maybe that was just one of Walters (many) delusions? That would certainly help smooth the way for a Lebowski sequel about the Jesus as a school bus driver.

Download a zip archive of the site (with many missing images and video files) here.

Previous Post: Dudesong: The Big Lebowski Made into a Modern Mock-Heroic
Next Post: No Frame of Reference #21: The Dude and the Zen Master