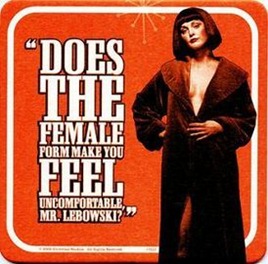 It seems that the issue of sexual freedom is in the news again, though many Dudeists probably think this issue was settled long ago. Wasn’t there a sexual revolution? Yet now it seems to be in vogue to put forward legislation that either undermines reproductive rights or outright vilifies what we all consider a natural zesty enterprise.

With abstinence-only education all the rage in some American states, and increasingly weird conditions placed on those seeking abortions, it seems that the US is moving backwards. Are we in the midst of a sexual devolution?

As evidenced by Michigan lawmakers recently when they censored state Rep. Lisa Brown for using the scientific word for "beaver" on the house floor, we appear to have gone back to a time where men were afraid to say "vagina," or even to hear the word itself.

Finally, Mr. Speaker, I’m flattered that you’re all so interested in my vagina, but ‘no’ means ‘no,’
— Representative Lisa Brown

Ms. Brown made those remarks in a debate over abortion term limits, arguing against their intrusive nature. She was the barred from making further remarks in hearings on an unrelated school retiree bill, according to Speaker James Bolger because she failed to maintain decorum.

This does not bode well for our children. Dudes, we all know teenagers are going to investigate sex, but as fucking amateurs (literally) they don’t know all the ins an outs (um, figuratively) of league play. If they’re not provided with honest information and understanding, there will be a lot of White Russian spit-takes and unplanned little 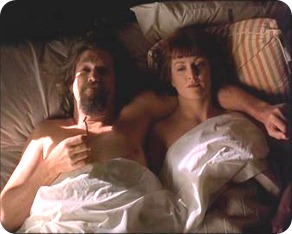 While we may take comfort in knowing this human comedy will perpetuate itself, there is something to be said for family planning and managing the time and circumstance of how exactly it goes further on down the genetic trail. For instance, if you’re planning to go on tour with Metallica, it may not be the best time to conceive.

Why do some feel it’s the right thing to determine whether or not we should roll out of here naked? Or even discuss around which lanes we can wave our pieces? There are a lot of threads to this, but one thing is clear: Evangelical conservatives (perhaps the most powerful special innarest group in the country) do not see sex as a natural, zesty enterprise.

“One of the things I will talk about, that no president has talked about before, is I think the dangers of contraception in this country. It’s not okay. It’s a license to do things in a sexual realm that is counter to how things are supposed to be. [Sex] is supposed to be within marriage. It’s supposed to be for purposes that are yes, conjugal…but also procreative. That’s the perfect way that a sexual union should happen…This is special and it needs to be seen as special.”
— Rick Santorum 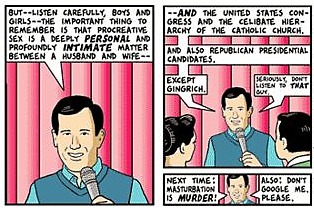 It’s foreboding that Santorum, with his anti-sex message, managed to get so far in the Republican primary. That, taken with a slew of anti-abortion and anti-contraception laws introduced this year may cause some to wonder if there’s a movement in the works that’s trying to erase the entire 1960s.

It was one thing to harbor this attitude before modern medicine. But today we can avoid many of the consequences of sex; STDs and unplanned pregnancies are not luck of the draw, as they were in centuries past. Condoms and birth control not only prevent unwanted children (and the societal catastrophe which follows), but advancing epidemiology and medicine minimizes the general threat of STDs. 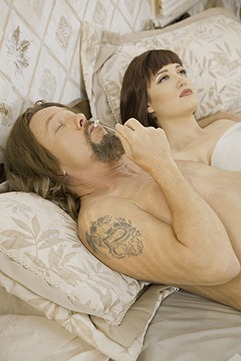 Nationally the rate of teen pregnancies is dropping. The Internet is also giving more and more people access to its wealth of information. A problem is that low-income families — those most vulnerable to unintended pregnancies — are less likely to have Internet access.

Low-income families also rely on Planned Parenthood for many differing types of reproductive services. If you were to listen to some opponents it would seem the government is funding an abortion mill, but this is untrue: 97% of of PP services are not related to abortion, and they receive no federal funding for the abortions they do provide. Yet pro-life politicians from around the country have attacked PP funding at every opportunity. These cuts put women’s health at risk, and deny reliable, scientifically-derived information regarding birth control — information that is desperately needed if we have any hope of stemming unintended teen pregnancy. 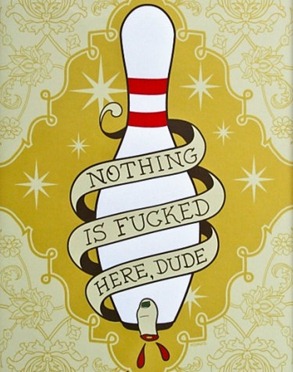 Meanwhile back at the ranch, ideology and uptight thinking have caused officials in Texas to ban Planned Parenthood in their state, a move that cost them millions in federal assistance. The legislature voted against PP, which violates federal requirements to receive Medicaid funding. Over the line! This is not Nazareth. There are rules. By adhering to this archaic ideology, they put as many as 130,000 low income recipients in danger of losing their federal coverage.

We are no longer slaves to our genes. It used to be that one had to have many children, both to counter the likelihood of children dying all too young and also to have free labor to help on the farm. Large families were a matter of survival. This is no longer the case. Modern medicine and modern economics have turned things on their head. A premature or overly-large family can be devastating, condemning the current and the next generation to poverty. It becomes nearly insurmountable to achieve educational or professional success when you have little Lebowskis that need food and daycare that you can’t afford.

Sex is a wonderful, life-affirming expression of mutual affection. It is natural and zesty. But as Lisa Brown suggested, unless specifically asked by a willing partner, politicians should keep their noses out of our vaginas!