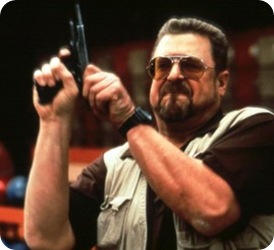 I just thought I’d get down to cases again regarding that fucking bitch, fear. You know, just for the sake of tying the mood together.

Fear can have many ways of manifesting: Though there are many, one of the most profound is the fear of death. I’d like to focus on this one, as affects all of us, dude, and I believe its "cure" applies to all the others. If you are able to look into the Grim Reaper’s eyes and laugh, then what’s the problem in dealing with lesser demons?

First of all, besides saying "Fuck it", or laughing and singing a song, the best way to deal with any fear is to find out the worst thing that could happen if your fear becomes reality and having a plan to deal with it. That, or if you can just get yourself to accept it, almost every fear simply loses its importance. 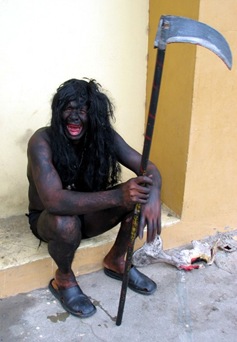 Ok, let’s go! Fear of death: Is there anything bigger than this one?

Well, death is simply the counterbalance for life. Without it what would be the meaning of life? If we have an unlimited amount of money we’ll just spend it in every conceivable way and it would soon loose any importance. Having only a limited amount instead stimulates us to use it as well as we can. And only for important things. The same goes for life: knowing it has an end should teach us to use the time we have focusing on the important things of life such as family, friends, special ladies/men, beers, bowling etc.

But what scares us about death? That it’s the end of this life, and this is something not easily accepted. Every world religion deals with the idea of some kind of life after death, and there is a reason for this: who can be content thinking that all we are will simply disappear one day? This is something that seemed almost impossible to me, that everything we are, our dreams, feelings, desires will simply fade away. It makes you feel like the good lord gypped you, you know. Can we die with a smile on our faces, knowing that it’s all wrapped up?

I’ll give you some points to ponder: 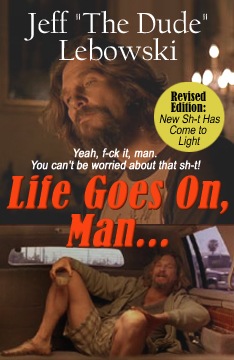 So, as the Dude said, "Can’t be worried about that shit. Life goes on." And it keeps going on until it doesn’t. So don’t worry about that shit. What can you do about it? Even giving up smoking or putting nonfat milk in your white russian only adds a little bit more on average. The best thing to do is enjoy what you’ve got, while you’ve got it. That’s what Dudeism is all about — providing ideas and tools to help you live without fear, anger, and what-have-you.

It is my belief that in the end we’ll just becoem privy to the new shit again in Dudervana, with all the people and animals we loved and enjoy time together, ready to bowl another series of frames on another lane. Further on down the trail of tears — sadness, joy, and laughter. That may sound far out, but it’s just, like, my opinion, man.