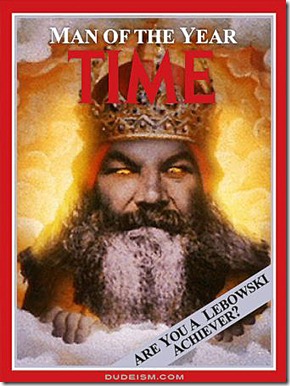 It used to be that the elements of a movie were hard-coded on celluloid and that was it. Then merchandising took hold of the industry and by the 1970s the universe was extended to adorn everything from action figures to lunchboxes. Then, in the 1990s movies became platforms to spinoff other media: TV shows, theme restaurants, and video games. The problem with all this was that it was just an easy way to piggyback a buck, and didn’t do much to honor the original material.

Though we admittedly sell a few things on our Dudeism site (gotta feed the monkey) we’re striving not to go “over the line!” when it comes to playing with the image of the Dude and Walter and all that the sacred movie stands for.

At this point the modest task which is our charge is to get more interaction from you, the Dudeist community. Like Web 2.0, think of this as Dudeism redux (redude). To that end we’re currently programming a Dudeist Social Notwork (not a typo) and also an online learning institution called Abide University. Separate incitements. 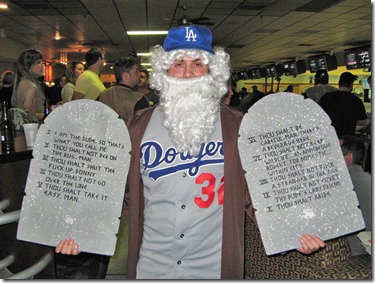 That is to say, in the same way as we’ve “extended” the universe of The Big Lebowski, we need to be extended by earnest and creative Dudeists.

Dudeism may be the first religion based on the teachings of a movie (and the pre-“extended universe” of Taoism, Zen, and other influences) but it is also perhaps the world’s first open-source religion. In other words, we haven’t figured it out yet.

Perhaps this approach doesn’t only apply to things religious and philosophical. In the age of Web 2.0, crowdsourcing and viral marketing, we might expect enthusiastic fans to increasingly incorporate all sorts of elements from fiction (Lebowski and otherwise) into their factual lives. Could we see a political Lebowski Party some day? An entire nation built on the principles of some future film? If you will it, dudes, it is no dream.

As the documentary “The People vs. George Lucas” suggested, stories are no longer mere reflections of our lives, but the two are beginning to work in partnership, exactly in the way that mythologist Joseph Campbell suggested that all great stories used to do. Of course, we hope that Dudeism can serve as an uncompromised example of that forgotten cultural imperative.

It seems likely that our dreams and our reality will continue to more forcefully intermingle, perhaps with the help of other 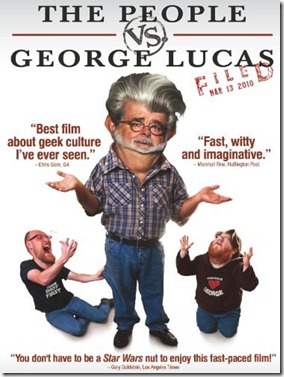 spiritual movements (like the Jedi and a few Bokonists). A harbinger of this mixing of fantasy and reality can already be seen in the trend of movie actors taking political office, engaging in awareness movements, yelling at chairs, or prophesizing the end of the world.

A more modest symptom of this phenomenon is all the incredible mashup artistry on YouTube. These homegrown nuggets of brain candy show the degree to which a mythological cornerstone like Lebowski (and others) can be meme-spliced with other myths to elicit laughs, and sometimes even a strange form of illumination. If nothing else, it shows just how arbitrary our identities might be –  seeing the Dude convincingly play a comical Darth Vader or MacGyver may impel us to re-examine our preconceptions about personality and fixed archetypes.

For the moment, the Dudespaper (submit articles here!), our forum, our Facebook page, our Reddit page, or just emailing us with ideas are the way to help us grow Dudeism into something truly far-out and far-reaching. But the lazy wave of the future is on its way. Forgive us if it seems to be coming a bit slowly.

Some of our favorite Lebowski mashups:

A bittersweet story about losing Donny:

A drama about Walter trying to get over the scars of Vietnam:

A clichéd drama about the Dude falling apart and finding his redemption
after his best friend Donnie dies:
Requiem for a Dream Sequence:

Know of any more good ones? Post in the comments box below!