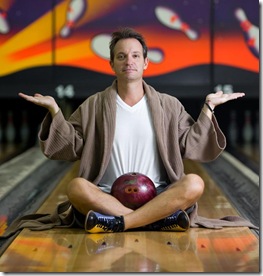 By the Dudely Lama, Oliver Benjamin

For a semi-professional writer and graphic designer, running a religion from behind a computer isn’t all that challenging. I usually find it pretty easy to get my point across when using written words and illustrations. This is mainly because I can edit out the errors before they are released into the ether.

However, as Dudeism has developed over the last few years I’ve been obliged to speak on radio shows, appear in advertisements, do stage performances, appear in news clips and participate in documentaries. Unfortunately, I don’t normally have as much control over how this stuff turns out. And I’m only slowly figuring out how to take ‘er easy with a camera and/or microphone thrust in my face. 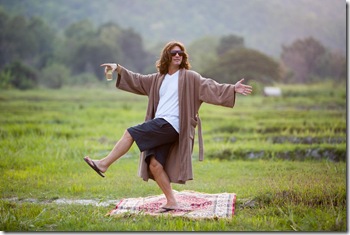 Though a lot of the pieces have turned out pretty groovy, there have been regrettable moments: A few radio interviews have ended up as stammering paeans of unprincipled blather. And there are moments in the videos that have been breathtakingly blunderful.

Yet even when perfectly crafted and edited the media itself can get in the way of the true Dudeist message: for instance, the popular and well-made VW ad still provokes indignation from some who assume Dudeism is just a fictitious invention of a car company ad department.

Of course it’s not easy being an evangelist. But I’m not complaining–Jehovah’s Witnesses and Mormons really have it rough. After all, all the knocking is at Dudeism’s door, not vice-versa.

Though I’ve been feeling increasingly comfortable in front of the camera and more confident when trying to explain what Dudeism is and why it’s "the religion for its time and place," there are still times when the goddamn plane crashes into the mountain. 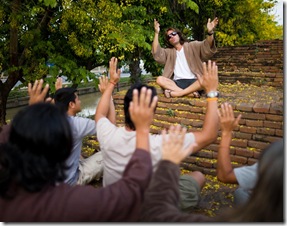 Back in the spring of 2011 I made a video with a very cool and very Dudeish Bangkok-based journalist. We had a great time going around Chiang Mai filming scenes of myself bowling and doing Dude Chi on a rug. On the whole it turned out pretty good. Except for one problem: We decided that since my hair was quite short at the time I should try on wig so that I’d look more like the Dude. We picked one up for ten bucks from a local women’s beauty shop, and then even went to a barber and had it styled. I even tried to haphazardly fashion the wig clippings into a goatee but it proved impossible.

The wig thing seemed like a purty good idea at the time. Why? It could be due to the fact that in the course of it all I had imbibed several white russians in the middle of the day. At least, that’s the best excuse I can come up with now. 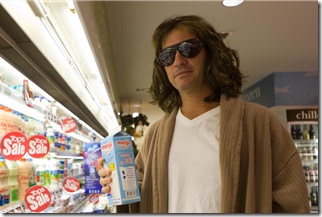 The result was that, in my dudely opinion, the video was marred by what looked like a huge dead animal perched on my head.

In the end, other than the silly wig, I’m rather fond of the video. It provides an insight into what my life in Thailand looks like. Then again, it also shows how disgustingly long my tongue is at full extension. It’s also pretty funny in parts. But for some reason I appear both oddly serious and totally facetious at the same time. On a side note, the photo shoot came out really cool. In the end, however, it seems that no websites or magazines bought the material from the company the journalist worked for, and thus they finally posted the video on You Tube.

So I’m writing this article to explain that although it is fun to watch, this video isn’t necessarily the best representation of Dudeism, the Dudely Lama, nor the Dudely Lama’s hair. I don’t blame the journalist at all — he’s a good friend and thurrah and a true professional. I take full responsibility for the wig. Moral of the story: Don’t drink and costume design.

By way of consolation, the stuff I did months later with Thomas Fazi for "The Way of the Dude" (still in progress) featured my own naturally longer hair.

Ups and downs, strikes and gutters. That’s the way the whole durn Dudeist comedy will continue to perpetuate itself. As always, I hope that no one confuses the medium with the message. Catch you further on down the trailers…

The Dudely Lama With Wig:

The Dudely Lama without Wig:

Expect more from "The Way of the Dude" (documentary in progress) on these pages soon!