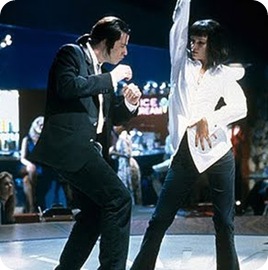 So I’m at the Duder Bar beating Bub and this 300 pound Chinese guy, name of Yang, who came in with one of those fancy, screw together pool cues, in a game of Fuck Your Buddy. As most of you probably know, Fuck Your Buddy is a sophisticated bar pool contest involving three players, each of whom has five balls to call their own…1-5, 6-10, 11-15. The object is to knock the other guys balls in while leaving the cue ball where the other guy can’t make your balls if you miss. The winner breaks. We are playing for a buck a game and, so far, I have run the table three times. I am about to break again when Yang speaks.

"You’re sure on a roll Hier…Hier…"

"Hier…ony…mus," I state as I straighten up after another killer break. "Yeah…I’m in the Duderino Groove…"

"The what?" Yang queries. 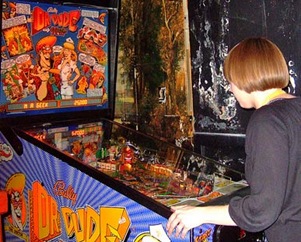 Bub can’t resist, "Hieronymus is a Pin Dudeist, so I guess the…"

"Bub…you’re out of your element, Bub," I interject. "The Duderino Groove is…"

"What the fuck is a Pin Dudeist…a DUDE who plays fucking PINBALL?" Yang interrogates, enunciating ‘pinball’ in such a way that it sounds like a case of the clap.

"Well, the Dude DOES just happen to play pinball…but the Pin in Pin Dudeist refers to the noble sport of tenpins," I answer as I make another of Yang’s balls, " …just think of Pin like you think of Zen…you know what Zen is don’t you Mr. Yang? And Dudeist, OF COURSE, refers to one who espouses and prolestizes Dudeism. If you don’t know what Dudeism is, Mr. Yang, look it up…"

"Yang is my FIRST name…bowling, huh? Obama bowls. So what is the point of Dudeism, Mr. Hieronymus?"

I make a great combination shot on the seven. 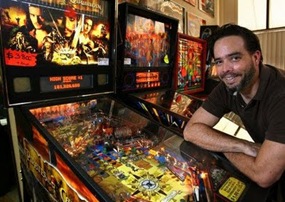 "Reverend Moondog to you, Yang…SIR. Point? No POINT. The Dude just ABIDES, man…and AS the Dude ABIDES…most of the time the Dude is in the Duderino Groove too, man. You know…the Dude is really comfortable in his own skin…in the zone, man. A great pinball artist once said…"

"…’one can enter a groove where there is no physical break between thought, action, and consequence. There is a zen of pinball, when the paddles become direct extensions of your brain, and you no longer feel the little buttons on the side of the machine, nor the spring as you let loose another ball.’…that’s the "His Dudeness Groove-ness" he’s speaking of, man. Same thing with pool…"

I smack in another ball. 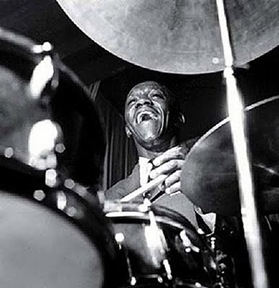 "…the cue is alive…part of your arm…you are not shooting pool, man…pool is shooting you. Same with music…the drums play you…the guitar plays you…and El Duderino Groove-O can be like a contact high, man. I was lucky enough to be on the same stage…not playing music, but shooting film, with Art Blakey once…and also Jerry Garcia…and these Dudes were ALWAYS in the groove, man…in the pocket…and looking through the viewfinder…after awhile there was no separation. I was not shooting the music. The music and my shooting it were not two. Just like now and the six ball…"

Whack! The six…three rails into the corner.

"So, you’re stoned all the time?" REVEREND Moondog. What’s the REVEREND bullshit all about anyhow? 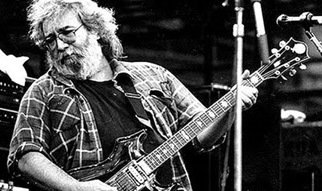 "Fuck no the Dude is not stoned all the time. But there is a Dudeist State of Consciousness, or DSC, that the Dude abides in MOST of the time…if not interrupted by assholes who piss on his rug…that I like to call the Duderino Groove…like I keep saying, man. You know…flow like a fucking river. The universe plays the Dude, man…the Dude is the instrument that Doctor Universe wails on at three in the morning. Do I make myself clear…YANG…what’s your last name Yang?

"But of course…every well educated gentleman knows how to da…"

"Can we see you dance Mr. Yang Yang?"

"As they say…if not here…where? If not now…when?

I put some money in the jukebox. Creedence. I put down my cue and begin to weave…way inside the old Duderino Groove-O now… around the table, down the bar and back. I continue to sway and grin as I circle Yang.

"Since you’re a well educated gentleman, you know what Fred Nietzsche said don’t you Yang Yang?"

"I would believe only in a god who could dance…said Fred. Dance Yang Yang…for god’s sake…dance!"

I grab Yang and whirl him around. By now, everybody else in the Duder Bar is moving…looking like one giant many armed, many legged single Duderino Grooving creature…holy rolling to Creedence… 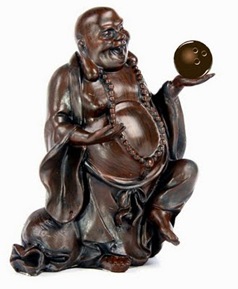 Finally, Yang drops his bullshit and spins, dervish style, down the length of the bar and into the street, laughing uproariously the whole way…looking for all the world like some marvelously crazed dancing Buddha.