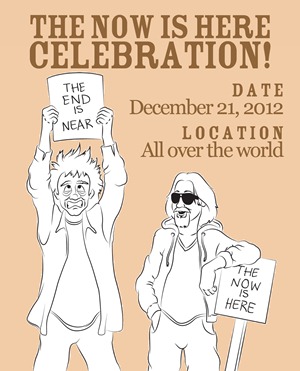 It’s been a pretty fucked up couple weeks as we approach the end of 2012, don’t you think?

And if all this nihilism hasn’t been enough to make you want to tattoo “Fuck it” on your forehead as your answer for everything, pin your diapers on, Lebowskians: now the world is about end!

As you may recall, the last time the global plane was supposed to crash into the goddam mountain was last year when a real religious reactionary forecasted not once but twice that the apocalypse was imminent—one prediction had it happening in the spring and another in the fall (presumably for those who missed it the first time).

You see, it all has something to do with their calendar abruptly ending on the equivalent of December 21, 2012.

With the conclusion of the (ancient Mayan) calendar, millions believe that the world will also end — or there will at least be some massive cataclysmic event that requires candles and other essentials.

While the panic over the nearing Mayan Apocalypse has caused several in China and Russia to rush for supplies, the supposed impending catastrophe has caused an explosion in survival shelter sales in America, along with a mass exodus to a mountain in France.

We don’t know about you, but we don’t take comfort in that…knowing these dupes are out there taking all this shit seriously unlike us critical thinkers here. 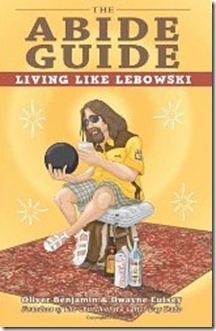 They’re being very undude…but that’s nothing new when it comes to the so-called End Times. Folks have been unfolding undude stories about the world coming to a terrifying end ever since we climbed down from the trees and began speaking in multi-syllabic grunts.

As we say in The Abide Guide (our pile of holy writ):

For centuries, people around the world have loved to scare the shit out of each other with cryptic divinations about the End Times—from ancient Norse Pagans spooking themselves with the tale of Ragnarok (the cataclysmic final battle of the gods that would do to the universe what Jackie Treehorn’s thugs did to the Dude’s bungalow)—to the lucrative Left Behind franchise dramatizing what some Christians call the Rapture, with Kirk Cameron’s performance in the series’ film trilogy leaving many viewers wishing the world would end soon.

The Church of the Latter-Day Dude, however, is one of the few world religions that’s not all hung up on figuring out when the End Times will happen…That sounds exhausting. What we are all about is figuring out how to live in tune with the Dude Way right now in These Here Times. 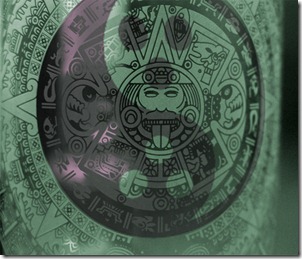 That’s why we’re encouraging Dudeists around the world to celebrate The Now Is Here Day this Friday, December 21. While the gloom-and-doomers are running around like a bunch of fucking amateur eschatologists (Google it), let’s show the world what it means to abide.

Throw a solstice party, organize a Dudeitation flash mob, do random acts of kindness for others, fire up a jay in public in Washington State and Colorado now that the legislatures there don’t mind, have some beers, some burgers, a few laughs…anything that says with a casual rebel shrug: “Just take it easy, mankind.”

The way we figure it: If the world is going to end this Friday, at least we all went out on a positive note: taking it easy, enjoying ourselves, and helping one another out. And if the world doesn’t end, well, we’ll all end up having a purty good Friday, if I understand it correctly.

Either way, it’s all going to balance out just as it always does. The universe has that whole yin yang thing going on, after all.

It’s like Lennon (and three other guys) said about The End:

Previous Post: How to Find Your Own Purpose
Next Post: Dudesong: The Big Lebowski Made into a Modern Mock-Heroic