As a Dudeist, I’ve had to grapple with the meaning of belonging to a new religious movement in the modern world. Especially since my boyfriend is a Pastafarian. That’s right. I’m in an inter-sorta-faith relationship.

Initially, our sorta-faith systems may seem incompatible. After all, Pastafarians are really big on sarcasm and propaganda and we Dudeists are way too laid back to bother trying to convince other people to take up our faith. At first I thought I was getting proselytized when my man gave me a copy of The Gospel of the Flying Spaghetti Monster. But then I realized the book was really fucking funny, so why wouldn’t I want to read it?. 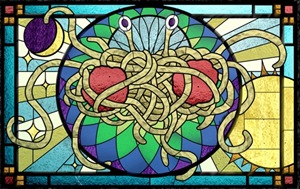 As a Pastafarian, my man worships the great Flying Spaghetti Monster and pleads that he can receive the blessings of his noodly appendage. This also means he’s preoccupied with pirates and their obvious connection to global warming. But you know what? I can dig that. Pirates are cool. Pirates aren’t pacifists, but they aren’t nihilists either. They have passion for life but aren’t concerned with mainstream career expectations, which is a very Dudeist way of experiencing the world. They also like rum, which in extreme circumstances can be used to replace vodka in a White Russian. Both Pastafarians and Dudeists can agree on the mantra of "Fuck It," although while I might follow that up with "Let’s go bowling," my boyfriend might say "YARR WE BE COMMANDEERING YONDER SCHOONER!!" Or maybe he’ll just torrent some files. I dunno. 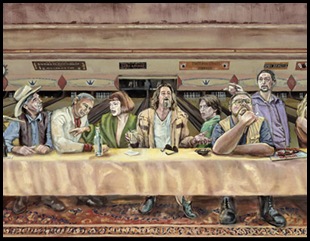 There’s ways we can celebrate one another’s faith; for example, oat soda goes great with spaghetti, and White Russians make a great apéritif regardless of the meal being served. Pastafarians also don’t as yet have a canonical flick, so it’s cool that The Big Lebowski occupies the place of honor in our shared DVD collection. Likewise, since Dudeists make no claim to know anything about where the universe came from or where it’s going, I have no problem with my boyfriend’s belief that the afterlife 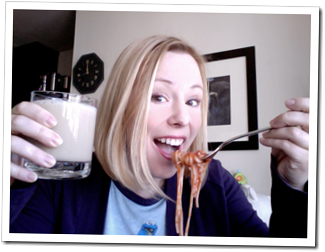 has a beer volcano and a stripper factory. Fuckin’ A, who wouldn’t want a beer volcano and a stripper factory? I’m cool with the Pastafarian holiday of Holiday, and I didn’t even have to ask my boyfriend to help me celebrate the Dudeist holiday of the Day of the Dude. We spend pretty much every Sunday sitting around taking ‘er easy on the couch anyway!

If we ever end up with a Little Lebowski on the way, we’ll have to grapple with which faith we’re going to ram down our offspring’s throat. Or maybe we’ll have to come up with a way to honor both systems, like those half goyim/half shomer shabbos kids I grew up with who got presents for Hanukkuh AND Christmas. Lucky fuckers. 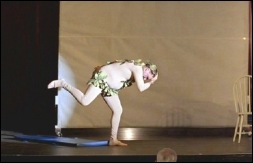 I lost my train of thought there . . . oh yeah. My point is that just like people from more elderly religious traditions have to negotiate differences of faith, so will those of us who belong to newer ways of thinking. And in true Dudeist fashion, I’m cool with whatever my man believes. As long as he doesn’t make me come to some kind of modern dance thing where he’s wearing an ivy-covered unitard.