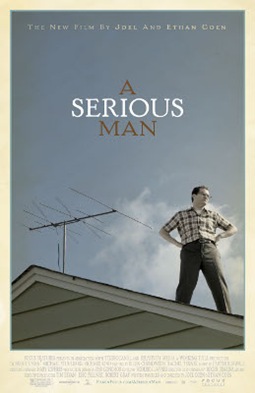 Over here at The Church of the Latter-Day Dude we’re big fans of all of the Coen Brothers’ films, not just our holy crucible, The Big Lebowski. However, it must be said that the rest of their films tend to be much darker and don’t generally contain the life-affirming, practical philosophy that Lebowski provides. Mostly they tend to showcase profoundly flawed human beings who get an ironic and darkly comic comeuppance in the (often grisly) end. Not examples to live by, but rather to avoid.

However, to some degree, there might just be a little Lebowski on the way, in a manner of speaking. Their newest film, A Serious Man (out today) looks poised to offer some useful life lessons for the more sensitive souls out there. We haven’t seen it yet, but A.J. Jacobs’ review in Esquire magazine glowingly compares the film with The Big Lebowski, suggesting that it may harbor the funniest, deepest investigation into what-life’s-all-about since the Dude shuffled lazily onto the screen in 1998.

It’s an inspiring review, made all the more so by the fact that it gives some serious props to The Church of the Latter-Day Dude. Thanks A.J.!

In a nutshell, the story is this: confronted with a catastrophic string of awful luck, the movie’s midwestern, mid-20th century, middle-class and profoundly middling Jewish main character consults a series of rabbis to try to find some solace. What does he learn? Well, dude, we just don’t know yet. But we can’t wait to find out.

Neither should you. Check your local listings and roll on down to the theater chop chop. We haven’t been this excited since the Lebowskifest came to town.