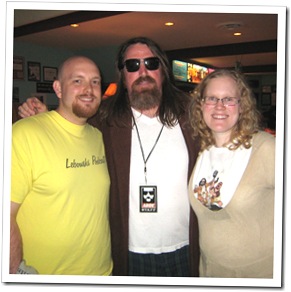 This year Liz and I had the privilege of attending two Lebowskifests. The first, in July, was the big daddy of them all in Louisville, Kentucky, and the second was just a couple weeks ago in Boston, Massachusetts. While the turnout in Boston was definitely smaller than L-ville, there is certainly no lack of Achievers nor Dudeists on the East Coast.

The second night, better known as the Bowling Party, was probably the most enjoyable Liz and I have experienced. Besides being in a venue full of Kingpin (quite possibly the second greatest bowling film) memorabilia, it was also less crowded; therefore, everyone was allowed a chance to bowl. Liz and I shared a lane with four fellow Achievers. We already knew Dave and Trena, two friends from Portland, Maine, and had the privilege of meeting Steve and Matt who I believe were from Massachusetts. There were a few problems some pins getting stuck, Dude’s score got a little dinged up, but the experience was fun nonetheless. 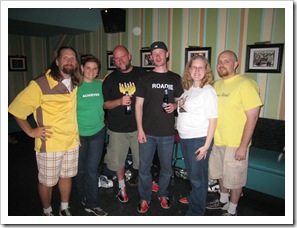 The real excitement came with the trivia contest. Before we even arrived, my buddy Tom, aka Dude, was telling me I needed to enter. I have never entered a Lebowski Fest trivia contest before. I think this is mainly because I know heavy hitters show up at these things and I didn’t want to embarrass myself. I run the Lebowski Podcast and people expect me to know this stuff. After a little more goading from Tom, as I walked past the merch table, I decided to fill out the Round 1 Trivia form.

The first round of questions weren’t too hard and I wasn’t too surprised to hear my name called off for Round 2. There were maybe 20 of us and we all received a second sheet of questions to answer. A couple of these were a bit tricky and obviously engineered to weed out the faint of knowledge. I wasn’t sure how well I did and was surprised to hear Scott call out “Chalupa” to show up for Round 3. 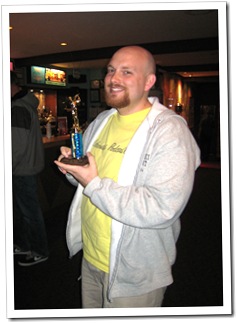 The third and final round is a combination of verbal and written questions for the top three finalists. The first half is a lightning round of questions given to each finalist with roughly 10 seconds to answer. If they answer incorrectly, the next in line has a chance to steal. I’m not sure how this worked out, but I received four easy questions (and by easy I mean I immediately knew the answer) and was able to steal one from another contestant. I was quite fortunate because the few questions I was clueless about went to the other two guys. Apparently grabbing a seat close to the door was a good strategy, even though Tom told us afterwards that the middle seat usually wins.

The second half of Round 3 is another set of written questions much harder than the previous round. I haven’t mentioned any of the actual questions, and I’m not planning on divulging any. Austin Fest hasn’t happened yet, and it just wouldn’t be fair. So you may have already heard, but I was able to pull of a First Place win. What can I say? The Dude Abides. 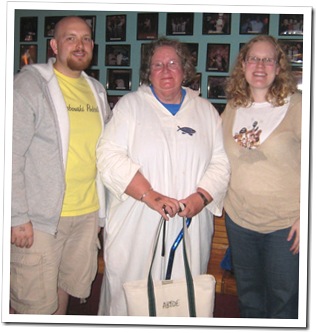 I think the most surprising sight of the night was the Dudeist Monk we encountered. I know many of us throw around the term, but have you ever put on a monk-robe complete with Dudeist patches and handed out prepared Dudeist blessings? I know I haven’t. I’m ashamed to say I can’t remember her name. I’m terrible at remembering people’s names after a brief chat or meeting. This lady was the real thing. I asked if we could take a picture to share with all of you, and she readily agreed.

So I guess this makes me the reigning trivia champion of Lebowski Fest Boston. That’s kind of a scary title. I think I’d rather just be known as Chalupa. So that’s what you can call me. You know, uh, that, or uh, Duder, or C-Dude or El Señor Chalupa if you’re not into that whole brevity thing.