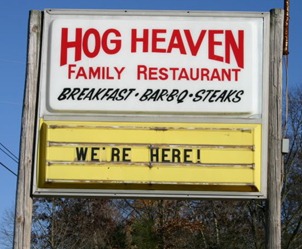 Barbecues are chock full of good karma. Don’t ever let anyone tell you otherwise. All that barbecued meat sizzling on the grill is actually good for you. Carcinogens aside, there are many reasons why you should never turn down an invite to a cook out. I know I won’t. If someone says “Hey, were having a barbecue, you should come over” you’ll never, ever hear me reply, “No, not tonight, I’m watching CSI Miami.” Anyone invites me, and I can get there…I’m going. Let me tell you why.

April 15th, 2010 will go down in my biography as a very important night. I work for a contractor to US AID in Kandahar, Afghanistan. The city of Kandahar, at this point in 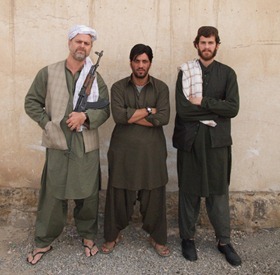 history, is similar to the set of a Mad Max film, or maybe Plant of the Apes. To call Kandahar a shit hole is to demean shit holes. It’s off-the-charts violent, the home of the Taliban, smack in the middle of Kandahar province, the last front in a war that started on September 11, 2001.

I was living in a compound in the city, right on a main road where a lot of other development companies and NGOs were housed. Many think I work for the CIA. I wish it was that sexy. But I don’t. I’m working for a development company that takes US and Canadian taxpayer money and develops infrastructure projects: a concrete bridge, or maybe a well; basic things that westerners take for granted. My job is to go out and look at the concrete bridge and write a glowing report about the progress of construction. In short, I look at concrete—or a ditch–and write about it. You’d think the Afghans might be happy.

Your average Afghan might be. But the Taliban isn’t. And this is where my story of why I now love barbecues more than any other social event ever becomes very relevant. 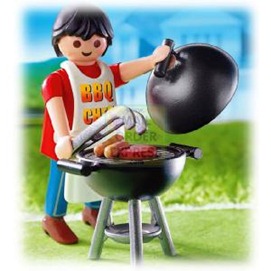 A quick cultural lesson for anyone who has never ventured into the Middle East: In the Muslim world, Friday is considered the Sabbath, the day of rest, the day where they go and reflect on their Muslimness, for lack of a better word. So for we development workers, Thursday night is party night. And what better way to party than to have a barbecue, complete with steaks, chicken and beer, on the roof of our infidel compound. It’s not like we can go out. There isn’t any place to go. Kandahar doesn’t have any groovy bars, fun coffee shops, no discos. And it’s Planet of the Apes out on the streets, and all the development workers are all looked at like Charlton Heston.

So, on April 15th, we’re having a rooftop barbecue. At about 9:00pm, we hear gunshots off in the distance, somewhere in the city. We don’t think anything of it because it’s Kandahar. It’s common. It’s Planet of the Apes. Chaos. We continue eating our steaks and drinking our beer; so far, another typical Kandahar Thursday night. 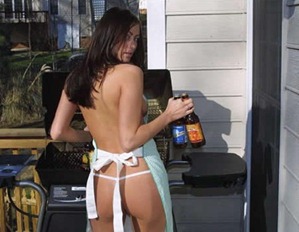 Not long after, more gun shots, only this time it’s right in front of our compound, out on the street. Remember, this is Kandahar, a town prone to gunshots, maybe even more so than say, Detroit, or even inner city Los Angeles. After a burst of about six or eight shots, it’s quiet. We don’t know if it’s from a passing car, or from one of the guards who works in front of our compound, or from one of the other compounds down the street. The nine of us, all still drinking beer, still sitting there digesting very delicious char broiled steaks, start to put our beers down to get up and have a look over the edge of the roof. 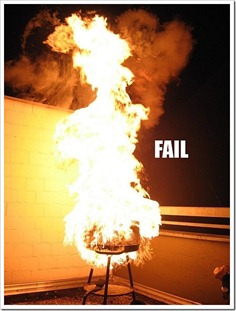 I was finishing off my beer when the world suddenly turned orange. The blast seemed to be coming from under us, right down through the house we sere sitting on. A large skylight that looked down on the second floor immediately blew out, the glass flying across the roof, blowing out of the house and across us.

IED. The military loves acronyms. IED is military parlance for Improvised Explosive Device. The Taliban love them. What they do is they get a ‘believer’, usually a young man, amped up on a very wacky version of Islam filled with promises of being sent to paradise loaded with virginal wives (I’m not partial to virgins since who wants a woman without any experience), teach them how to drive, pack a car with explosives, and send them out to find a target to blow up. This very clever weapon is also known as a Suicide Car Bomb. 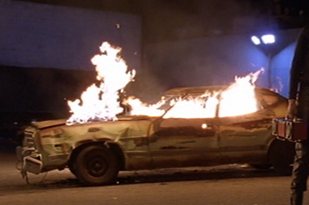 We didn’t know yet, but we’d been hit by a ‘believer’ in a Suicide Car Bomb. And I can tell you from first hand experience, when they go off, when the ‘believer’ hits the button and evaporates in the blast, they are the most violent, loud, horrific event you can ever live through…that is if you’re lucky enough to survive to describe it.

We were very lucky, all of us on the roof, on the night of April 15th, 2010. By pure coincidence, when the bomb went off, we were all on the roof…drinking. Digesting. Telling stories. When we ran down the stairs into the house, we got to see what destruction a Suicide Car Bomb can do. All of the windows had been 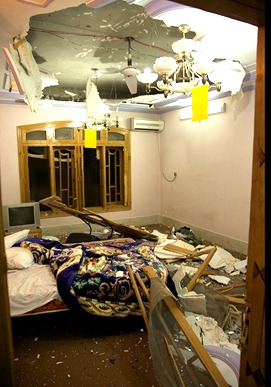 blown out, along with the window frames; the windows had turned into glass shrapnel. The ceilings had fallen in. The doors had been blown off their hinges and in some cases, turned into toothpick-sized bits. Every bedroom had been trashed, filled with shards of glass, wood, wire from the window frames, the floors covered in plaster and cement.

The realization was immediate. If we’d been in those rooms, the combination of the hot blast, the flying glass, the falling ceilings, the spears of wood, the compression of air would have seriously injured, perhaps killed some of us.

The bomb hit our neighbor. Not us directly. The ‘believer’ in the Suicide Car Bomb had killed himself along with three other people and seriously injured 20, only 50 yards away, leaving a five foot-deep crater in the asphalt and completely pulverizing the cement barriers protecting their house. 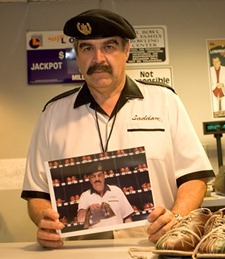 It was a righteous moment for all of us. On that night, at that moment in time, we were the luckiest bunch of steak digesting, beer drinkers ever. We’d survived a Suicide Car Bomb. We’d  had a barbecue, and enough beer so that we all stayed on that roof when many of us just wanted to head to bed. Luckily, none of us had gone for a piss and been trapped in the blast.

Since I’d been spared, I decided there on the spot that barbecues are good for you. A barbecue can save your life. Never mind what any vegetarian tells you about how bad meat is for you. It’s all crap. If anyone ever invites me somewhere for a barbecue, I’m going. Obviously, I need to be there. That barbecue is my destiny.