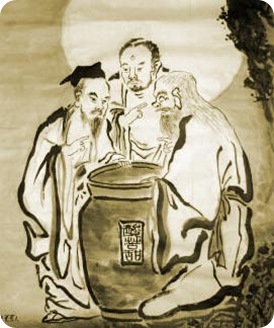 By William Hoffknecht, The False Prophet of Dudeism

To have a great team, you need a good balance. The bowling team comprised of Donny, Walter, and The Dude is a perfect example. They work so well because of the mix of people and emotions that are ever prevalent within their circle. They are able to combine two great extremes, and one center weight to keep the polar opposites from clashing constantly.

Their mix reminds me of one of the most important pieces of ancient Chinese art, especially Taoist art, entitled "The Vinegar Tasters". If you are unaware of the piece, it is a simple picture with a vat labeled "vinegar" in the center and three men standing around it. The three men have all taken a taste and each is giving a different reaction to the situation.

The three in the picture represent the three pillars of Eastern thought. The first man in the picture is Confucius, standing next to him is Buddha, and the three are rounded off with the wise master, Lao Tzu. Each of their reactions are indicative of their philosophies and schools of thought. I equate Confucius to our friend Walter Sobchak, Buddha to Donny, and of course The Dude is very much Lao Tzu. This analogy can be expanded very deeply if you really want to try…and I do! 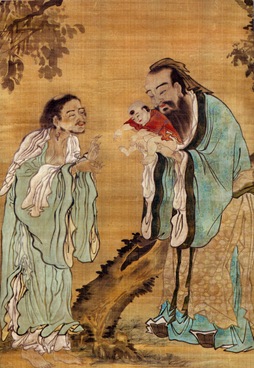 Confucius:
As the history of the painting describes, Confucius tastes the vinegar and finds it to be sour. This is a metaphor for the fact that he thought life to be sour and that the only way to find balance with nature and the way of things was to implement rules while remembering and worshiping the past, the ancestors. Walter, as much as we may love him, is so hard-line with the idea of following the rules that is goes to a great extreme. He also finds any situation to remind us of Vietnam and the sacrifices that his friends made for this country. Not only that, but he continues being obsessed with his ex-wife, her religion, and her dog. It is as if Walter is telling all of us that in order to be at peace, we need to find rules, live by them, and be reminded of the past.

Buddha:
It is said that when Buddha tastes the vinegar he found it to be bitter, full of tragedies and desires, extremes that lead away from inner peace and enlightenment. Before he became The Buddha, Siddhartha lived a lavish life of beauty and love with no idea about pain and suffering. One day he saw a sick and dying man and wanted to know more about the real world and what was 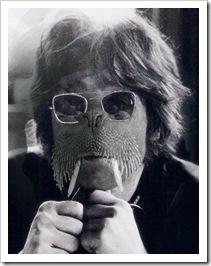 happening. This caused him grief. After more trials and many years of meditation, Enlightenment was said to have been reached when Buddha practiced "The Middle Way", balance of the body and the soul. This reminds me of Donny in a lot of ways. He is not an extreme in the ways that Walter or The Dude are, but instead stays peacefully in the middle, totally unfazed but also somewhat unmoved by the complexities in life.

One can also find a parallel in the fact that Donny was on a roll, strike after strike, until one day he left one pin hanging and finally learned about suffering. This was also the last day that he walked the earth, at least in a physical sense of the word.

Yet also, in comparison with Confucianism and Taoism, traditional Buddhism has as its ultimate goal "Nirvana", which literally means a "a snuffing out", that is, a release from the cycle of birth and death (and by

extension, bowling). Taoism and Confucianism are arguably more interested in the day-to-day affairs of our physical and social lives; in the same way, the Dude and Walter are far more "in the world" than Donny is.

On a slightly different note, when Donny hears the conversation about Lenin and thinks they are talking about John Lennon, his mind goes to "I am the Walrus", who has been revealed (by Kevin Smith in the movie Dogma at least) to represent the Buddha. I am he as you are he as you are me and we are all together my friends. 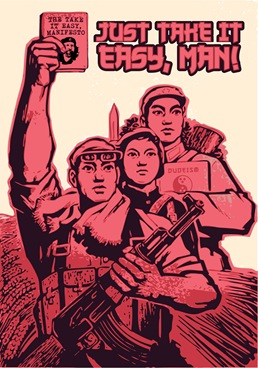 Lao Tzu:
In the painting, Lao Tzu is said to be smiling. That’s because he found pleasure in the flavor of life as it is. As he tasted the vinegar, he realized that this is the way nature intended this vinegar to taste and therefore was at peace with it. The Dude is very much the same way. We also know that the Dude rides the Taoist wave. He is a human and sometimes gives into human stress and frustrations, but he is quick to be reminded that he is being very "un-Dude" and meets life’s challenges at the next crest, never fearing the outcome. The Dude does not get bitter or find suffering in the fact that he may need to get more milk for his Caucasian, or that it is time to pay the rent again. I also think of the Dude mixing a White Russian. He does not measure the parts, but pours them and drinks merrily. Maybe there is a different mix of Kahlua or Vodka, but each serving has something positive to take from it.

There is beauty in the fact that it was the Chinaman that caused his heroic journey by peeing on the Dude’s rug. We know that the Dude was a more of a fighter from his past experiences. After the Chinaman set forth the series of events that we know of, the Dude is a more peaceful and calm man in the end. Perhaps the Chinaman taught the Dude that a little vinegar need not be such a catastrophic drag. 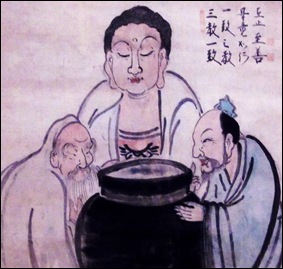 The Vinegar Tasters has been one of my favorite pieces for many years, as has the Tao, but now we see that Lao Tzu was ahead of his time. The Vinegar Tasters lived in the days before Ralph’s, In-N-Out Burger, of bowling, but they knew that even many years later they would be reincarnated in the souls of these people that would go on to teach us all that there are many different ways to view a situation and react to it. Walter found peace in structure and the past, Donny in both knowledge and the present, and The Dude in life as a whole.

Editor’s Note: Here’s another take on The Vinegar Tasters by the very Dudeish writer Tom Robbins, in his book Even Cowgirls Get the Blues:

IN A PLACE out of doors. near forests and meadows, stands a jar of
vinegar – the emblem of life.

Confucius approaches the jar, dips his linger in and tastes the brew.
"Sour," he says. “Nonetheless, I can see where it could be very useful
in preparing certain foods."

Buddha comes to the vinegar jar. dips in a linger and has a taste.
"Bitter," is his comment. “It can cause suffering to the palate. and
since suffering is to be avoided, the stuff should be disposed of at
once.”

The next to stick a finger in the vinegar is Jesus Christ. "Yuk," says
jesus. “It‘s both bitter and sour. It’s not fit to drink. In order that no
one else will have to drink it, I will drink it all myself."

But now two people approach the jar, together, naked, hand in
hand. The man has a beard and woolly legs like a goat. His long
tongue is slightly swollen from some poetry he’s been reciting. The
woman wears a cowgirl hat, a necklace of feathers. a rosy complexion.
Her tummy and tits bear the stretch marks of motherhood; she
carries a basket of mushrooms and herbs. First the man and then the
woman sticks a thumb into the vinegar. She licks his thumb and he
hers. Initially they make a face, but almost immediately they break into
wide grins. “lt’s sweet," they chime.