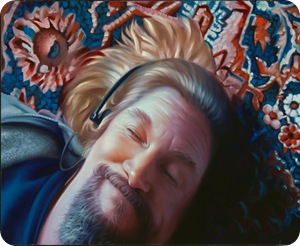 Dudely readers, I have to be honest with you. And honesty is the theme of this here Sermon from the Sofa.

Lately, in managing all the Dudeism websites I personally haven’t had much time (or energy) to write anything truly meaningful besides an assortment of Dudespatches, in which I’ve made you privy to some new shit, but which haven’t really helped you take it easy for us sinners, fuggedabout your problems, and just basically, abide in the face of unchecked aggression.

Luckily, there have been plenty of sympathetic and far-out musings from other stalwart contributors like the Arch Dudeship Dwayne Eutsey, our Italian Dudeship Andrea Favro and several other good and thurrah men and women.

But today I want to share with you something that (I hope) will become one of the cornerstones of our Dudeist faith. It ties the whole Dudeist rumination together. It creates a literal connection between what the fuck we’re talking about, what-have-you and what makes a (hu)man, Mr. Lebowski. 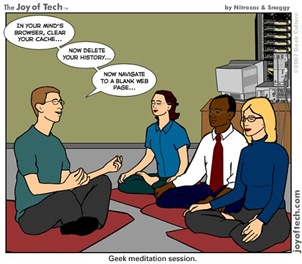 I’m talking about Dudeitation, here. It’s the mandala for its time and place. It sits right in there.

Dudeitation? Probably most of you have heard about meditation. It’s high in the running for most common spiritual practice worldwide.

There are many ways to perform meditation: Hindus, for instance, sit in the lotus position and pay attention to the ebb and flow of their breathing until they realize their inner Atman — their link to the universe. One of the many Buddhist practices involves staring with great intensity at a flickering candle the practitioner achieves such powers of concentration that they can pierce the veil of illusion. And almost all Christians pray to a personal God which they believe helps provide solutions to their problems. Hell, even Scientologists have that funky lie detector gizmo they use to reveal your own neuroses to you. No machine generates self-awareness more effectively than a good old lie detector.

Though religions may differ in dogma, the thing that gives each of them their true power are not their preachings, but their practices. And for all the ways that they differ, religions are more remarkable in the fact that they all share a few similar moral injunctions and regular rituals. 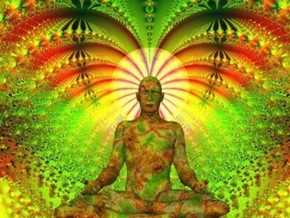 Above all, the one ritual practice they almost invariably have in common is meditation. And what is meditation? In many ways, it’s a version of the Scientoligist’s fancy lie-detector contraption — it’s a technique which helps you to stop manipulating and deceiving yourself, a way to make better sense out of what’s really going on in your head. It keeps your mind limber enough to see how full of shit it actually is, and help you get down to cases and solve the case, however brief or businessy that case may be.

Keep in mind that there’s no one way to dudeitate. However, after much trial and conjecture and determined guesswork we have come up with a system which we think should be ideal for cultivating the inner Dude in all of us. This is basic dudeitation in a nutshell:

1) Position
There’s no need to put yourself into the highly-challenging lotus position (legs crossed in a pretzel), but we do see the advantage of sitting cross-legged on the floor because it forces you to sit up and not fall asleep. If you can’t cross your legs without pain then sit with your back against the wall with your feet sticking straight out. Sitting on a pillow will help keep your legs from getting pins and needles. Some people can dudeitate while lying flat on their backs (like the Dude in the scene where he’s listening to tapes of bowling tournaments while laying on his rug), but most folks will find it hard not to drift off into dreamland, as the Dude himself does — though in all fairness that was due to Maude’s goons knocking him out. 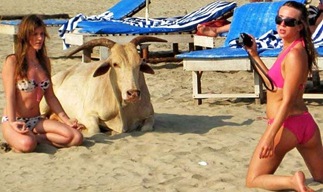 2) Setting
In dudeitation, silence is not just golden – it’s green with some rust coloration. That is to say, it’s awesome. Dudeitation involves totally opening up and emptying the mind and that’s hard to do if episodes of South Park are blasting in the background. Mellow, non-verbal music can be okay and even helpful however – Whale sounds seem to be a personal favorite of the Dude. If you have obnoxious or rude roomates earplugs can be purchased at most drug stores. Of course, make sure to lock your door so your roommates don’t pull and pranks on you while you’re in such a vulnerable position. Meditating in a public park or on the beach can be an option as well, though you’ll have to ignore the inevitable sounds of undude dipshits sniggering at you as they pass.

3) Procedure
Most meditation works by distracting the conscious mind so that our unconscious thoughts can bubble to the surface. Then, when those thoughts demand our attention, we practice not letting them get to us by just letting them go. A common metaphor is that we should watch them dispassionately like clouds drifting by. This is meant not only to develop greater familiarity with the workings of our unconscious mind, but to learn how to not be so attached to our thoughts and emotions; in this way they can’t so easily control us, distract us, and make us miserable with their constant blathering. 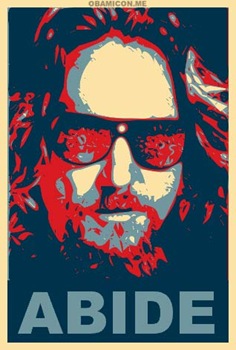 There are many ways to distract the conscious mind, and they almost always involve concentrating on something. Examples include: watching the rise and fall of your breath, staring at a symbol, or reciting a mantra (a word or phrase, usually of Hindu origin) in your head. We recommend the latter because a mantra can suggest an important ideal and thus help orient you towards bringing that ideal into your life. But we think you can more easily meditate with a smile on your face if it was in English (or whatever your native language is). It should come as no surprise that the mantra that we find that ideal represented by a single word: Abide.

As you breathe slowly and deeply in and out, periodically think the word “abide” to yourself, allowing it to act as a point of relaxed focus. The word itself is so pregnant with conception that it provides a perfect mind-compass to orient you towards a transcendental Dudeism.

In fact, to learn to abide in every sense of the word is the very point of all meditation – to find your center, to remain calm and unruffled, to discover where and what you are to be true and unflinchingly honest to your deepest and most authentic self. As we mentioned above, self-honesty is what all meditation is about. By learning to see through all your own bullshit you can see things as they truly are, not as the fucking phony goldbricking ego of yours is trying to scam you into seeing them. See who benefits? You do, Dude. And so will everyone you come in contact with. 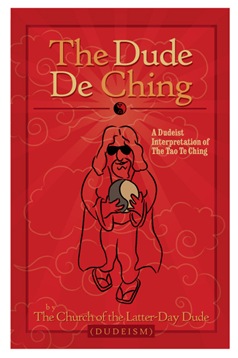 If you like, you can also mix things up a bit. For instance, if particularly agitating or unpleasant thoughts are bubbling up then you can think “Just take it easy, man” or “Ups and downs, strikes and gutters” or “Can’t be worried about that shit. Life goes on” or “That’s just, like, my opinion, man.” Plenty of non-Lebowskian mantras are out there as well, from Steven Wright’s “You can’t have everything. Where would you put it?” to Homer Simpson’s “Stupid brain” to James Brown’s “I feel good – I knew that I would.” There are tons of great lines out there you can use as a Dudeist mantra. (Why not suggest some in the comment section below?) Still, nothing beats “Abide” for powerful all-purpose dudeness. You might also look for lines in the Dude De Ching and the Tao Te Ching.

Many religions recommend envisioning the image of a revered saint or a manifestation of their deity during meditation. However, even though Dudeism holds The Dude from The Big Lebowski as the ideal exemplar of eternal Dudeness, exalting him to the point where he no longer represents a symbol of humility would result in a ridiculous contradiction (Of course, this doesn’t seem to be a problem in Christianity).

Nevertheless, envisioning the Dude and his “way” can be a useful technique to learn to “identify” with this example. This is what is called “Bhakti yoga” in India and conveys the notion of “participating in” or “becoming part of” the Godhead, or in this case, the Dudehead. Just don’t overdo it – the Dude is not The Jesus. He’s just the man for our time and place. 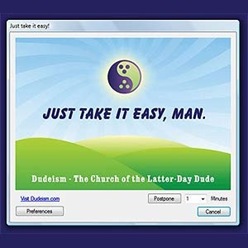 4) Duration
While lots of people suggest meditating for a half hour or an hour, it’s not really necessary to do it that long. You’d be better off doing five minutes a few times a day rather than a half an hour once a day. As you may know, we’ve even created a computer program that reminds you to take regular breaks. You can set it to tell you to take a two-to-five minute break every hour or two. And that would be a great time to practice dudeitation.

Now, of course we realize that if you work in an office, that can be a problem as your boss might think you’re slacking off. However, there’s plenty of data to suggest that brief breaks from work can actually increase productivity and be good for overall health (which also means less sick days). Maybe let your boss know ahead of time that this is part of your daily routine and he or she is bound to understand. If they disagree, then tell them it’s part of your religious practice and you can sue them for discrimination. Just kidding. But you probably could. You could also purchase or fashion a pair of glasses that look like you’ve got your eyes open. 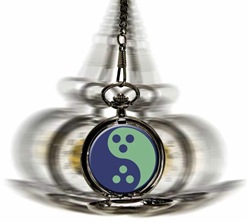 5) Hipgnosis
This is another, more active form of meditation that derives from the practice of self-hypnosis. We call it Hipgnosis from “Hip” meaning groovy and “gnosis” meaning knowledge (not to be confused with the album art company of the same name). We will be releasing a series of Hipgnosis tapes at sometime in the near future and discussing how it works in sacred Dudeist ritual.

Some people might experience immediate results from dudeitation. Others might need to practice a bit to get their wandering, impulsive minds under control. But at the very least everyone should find that taking a break from life on a regular basis can be profoundly relaxing.

Give it a try. You have nothing to lose but your pain.