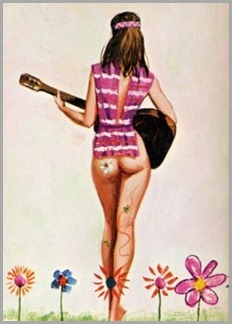 Dudeism bridges a gap that developed as the Hippie movement self destructed. When Dudes lost their spirituality, even as they lived it, they were unaware of “abiding” and how that connected them to this whole durned human drama. During the Hippie movement Eastern thought met western culture at a cross roads; human potential and freedom of expression were flourishing along with a drug counterculture. It all joined in a swirling mass of loving coolness. For several years things were going great, then troubles like the DNC riots of 68, and the Hells Angels roughing people up at a Rolling Stones gig, too many hippies became overcome with being achievers. Anger, aggression and addiction entered the movement which descended into the failed "me" generation.

After the traumatic events of the late sixties, the movement began to fracture, the squares took all the Zen with em’, the Hippies were left with only the drugs. Once they lost their 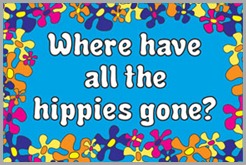 altruism and spirituality, Hippies just faded away from society. Some became disconnected solitary Dudes. With no spiritual touchstone, they drifted like tumbleweeds across a landscape dominated by reactionary religions and nihilists plots. Maintaining a take it easy attitude, and adhering to a strict drug regime, Hippies/Dudes were seen as little more than lovable bums, or outright criminals.

Eastern things still were spreading and many people began to practice Zen, Buddhism and Taoism; Sanghas were set up and rituals from the old world were passed down. The peace movement regrouped and put on a more 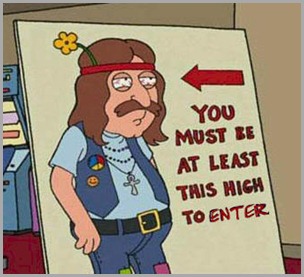 legitimate face. Even though the happy slacker who abides is sage-like, the reactionaries would latch on to a Dudes preferred forms of herbal meditation and use it to deface the the overall culture of peaceful abiding. Squares would not attack a Dude, but in the face of this aggression they may need to distance themselves from the Dudes, to protect the spirit of abiding. And the rift separating Dudes from their spiritual ground widened.

So where did that leave the Dudes? Well, they became a target of the Drug War mentality, the "if you are not a square or an achiever, then you must be no better than a crackhead who leaves their offspring in the trash". We almost started to believe them, the reactionaries; we allowed them to blame societies ills on the happy slacker, as if chillaxin’ with a doobie was going to leave America open to 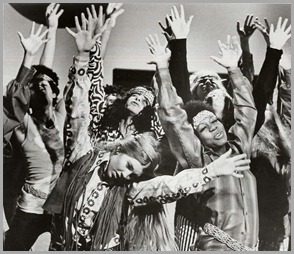 economic failure and decay. Meanwhile, the paraquats were pushing the achiever lifestyle, promising sports cars and half naked women to whoever pursued greed and materialism.The rat race of greed lead to needing to defend those material gains, bringing more guns and war to our planet.

Now that science and archeology have confirmed that the Dudes choice of herbal sacrament is both harmless to the individual, society, and historically considered a spiritual enhancer, the attacks by reactionaries look foolish. Now it is understood that not all drugs and philosophies are created equal, leaving plenty of room to stand up with an abiding attitude and defend the Dude lifestyle. That abiding is not slacking in personal laziness; that living a life of acceptance is key to living in a peaceful world. I think one could even defend Dudeisms validity against some of the worst reactionary types, at least to the point where their head explodes with frustration, or they start throwing coffee cups. 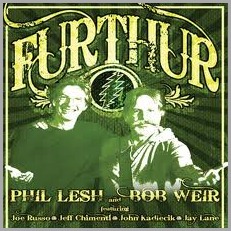 Dudeism kind of brings the modern hippies, the slackers, hip, cool, counterculture, partier types back into the Tao fold. Demonstrating philosophy and spirituality don’t mean you have to be a square or a reactionary, that complicated Zen rituals are not required. Candles, a warm bath and a J will do; they will do just fine as a personal ritual to find your Tao. Being rooted in ancient thought and beliefs, demonstrably peaceful and kind, yeah, man, Dudeism is the path of a sage.

With that this newly ordained Dudeist sees a long enduring future blossoming with Dudeism. There are so many Dudes wondering aimlessly thinking they don’t fit with the other theological/philosophical types, and certainly not with the achiever types. They are still unaware that the Dude has risen. That slacker does not automatically equate with failure or decay. Abiding isn’t just some Eastern thing; we 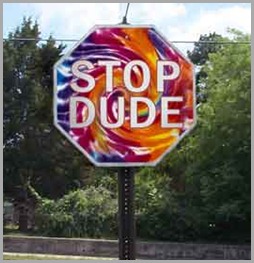 have been abiding for years. That waking up – the Dude can see where he fits in, and it turns out he fits right in there, with the other sages of old, and of the future Earth we are trying to find.

So welcome home Dudes. The Hippie movement may have died years ago, but its spirit is reborn, and with a brand new myth to boot. The Big Lebowski brought us the character of the Dude, and an archetype was born, a new hero for an ancient understanding, and the Hippie redefined. Today our western style of abiding is set to bring some much needed chillin’ out to the world. The slacker sage has an abiding abode in Dudeism.