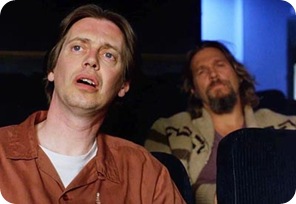 Just when you thought you’d had your fill of Dudeism on the airwaves, we’ve gone video viral, man. A couple months ago Moxie Pictures filmed The Dudely Lama shuffling around Los Angeles and talking about Dudeism for a Volkswagen commercial.

In order to support independent cinema in Britain, VW is by buying ad time at independent movie houses and showing short clips of people who’ve been inspired by movies to do unusual things with their lives.

Here’s an article in The Guardian about the ad.

And here’s a page with all three ads on it.

Or just watch it right here:

As Dudeism plays to a wider and wider stage, it’s inevitable that some people just won’t get it, or will otherwise find it stupid, blasphemous or even just lame. That’s just, like, their opinion, man. There’s some interesting discussion at this site in which Oliver Benjamin replies at length to some jaded videophiles (in the comments section).

Here’s some of the folks that actually shot the video. Nice bunch of like-minded compeers. They even have their own bowling team.