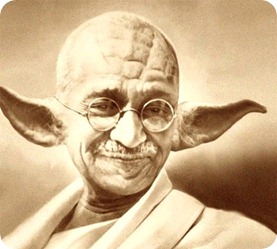 I know Dudeism is all into preaching non-preachiness, but as an abiding member of the Dudeist community I have occasionally recommended watching the movie and visiting the Dudeism website to a few of my friends. One of them was surprised to see Mohandas Karamchand Gandhi a.k.a the Mahatma (= Great Soul), figure in the list of great dudes in history. This got me thinking and I said to myself, that’s interesting, man. At first sight Gandhi, who was a teetotaler and eschewed modern modes of transport, might seem at odds with the White-Russian loving Dude whose recreation included driving around and the occasional acid flashback. And we have to face it; there might be no literal connection here, but let’s look a closer look. 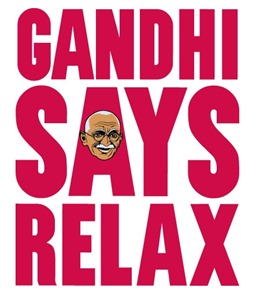 The most obvious connection would be the non-violent nature of both the men in question. Gandhi was agitating against the rule of a mighty foreign empire which had the wealth, obviously, and uh, the resources, to try and shut the guy up. And try they did. Everything from throwing him into jail, to having the armed police brutally break-up the guy’s peaceful demonstrations and threatening to cut off his Johnson. But Gandhi just said, "This aggression will not stand man" (or something like it), and continued the agitation by the simple act of fasting. And he had to deal with his share of Walters, people who said that non-violence was not something to hide behind, and who were all too ready to take up arms. But all Gandhi ever told these guys was to calm down and to stop waiving the gun around. 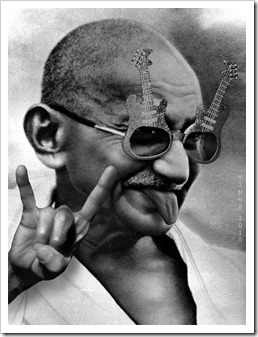 Gandhi believed that practicing satyagraha (loosely translated to Truth Force or Soul Force) was only for the most courageous of persons. In his own words, "Wherein is courage required? In blowing others to pieces from behind a cannon, or with a smiling face to approach a cannon and be blown to pieces?” To him, non-violence was born not out of a lack of courage but out of love and forgiveness for the oppressor. Qualities that the Dude displays a number of times, for instance, when he’s ok with Smokey’s toe slipping over a line a little or when Maude apologizes for the crack on the jaw. Hell, in spite of being severely criticized and insulted by millionaire Lebowski, upon hearing about Bunny’s kidnapping the Dude shows genuine concern for him. He’s even gracious enough to pay a compliment to Jackie Treehorn even though he had been assaulted by Treehorns’s thugs. In his autobiography Gandhi writes, “It is quite proper to resist and attack a system, but to resist and attack its author is tantamount to resisting and attacking oneself.” Far out.

An idea very close to Gandhi’s heart was that of swaraj (swa= self, raj= rule), a word which is largely synonymous with Independence, and was used as a rallying call during the Indian independence movement. However, it meant much more to Gandhi than just its political connotation. For him it meant freedom of thought and self-reliance even on the individual level. Freedom of thought can truly be said to exist only if one does not take on face value the accepted norms and modes of behavior and action, the prevalent laws, or the views and perspectives in fashion. According to him nothing should compel the courageous person to conduct themselves in a manner which did not agree with their sense of justice and their conscience, and this was the key to Self-Rule. 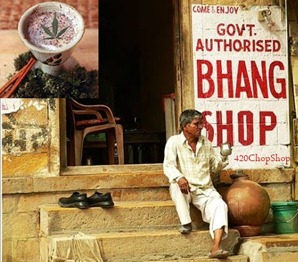 Now, there was this salt-tax law passed that prohibited people from making their own salt. Gandhi roundly rejected it, simply saying, "I’m sorry, I wasn’t listening," and then started walking down to the beach with the intention to make his own salt. No mean task considering the beach was nearly 250 miles away from Sabarmati Ashram (Gandhi’s residence). Gandhi specifically targeted the salt tax because salt is a commodity used in every household cutting across religions, communities, social and economic conditions. Salt was the proverbial rug that tied the room together (the kitchen room, at least). The sixty-one year old man made it to the beach in twenty four days, gathering thousands of followers along the way. Oh and by the way, history records that once at the beach he took a cool relaxing bath in the ocean, which has been widely acknowledged as a very dudely pastime, before going on to break the salt-tax law. One would imagine such freedom of thought was something very important to the Dude as well. Clearly, he operated outside most of the accepted norms of the square community and despite all efforts by the powers that be, he was willing to go the distance to assuage his sense of justice and be compensated for the rug. 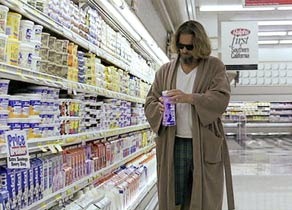 Another common thread is their simplistic way of life without much attachment to money. Let’s consider their minimalistic clothing. Gandhi considered the dazzling jewels and flashy clothing of regents to be insignia not of their royalty but of their slavery. He always wore a simple loin-cloth and shawl made out of khadi, a homespun fabric that he always made with his own hands. The Dude too is always seen in the simplest raiment, composed of not much more than t-shirt and shorts and occasionally a bath robe — quite unlike the flamboyant attire of the millionaire Lebowski or the completely un-spoiled Jackie Treehorn. It is worth noting here however, that both Gandhi and the Dude absolutely dug their eye-wear and slip-on sandals. "Simple living, high thinking," is a maxim from Indian philosophy by which the Mahatma lived. It would seem the Dude interpreted this maxim rather literally, (guided by the parlance of our times) and so decided to maintain "high" thinking by sticking to a strict drug regimen. And that’s cool, that’s cool.

There are great lessons to be learnt from the Mahatma for every self-abiding Dudeist. One might disagree with some of his ideas but that’s like, uh, your opinion man. To me it seems the Sabarmati Saint, (as he is sometimes referred to in India), is most appropriately revered amongst the greatest and most influential of the Latter-day Dudes. Perhaps one of 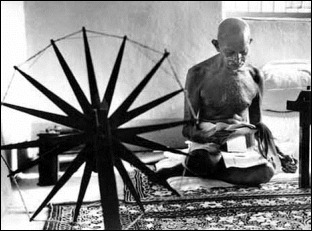 the minor disagreements the two gentlemen would have had would be regarding the use of so many cuss words. But we all know how the Dude would respond to that. I can almost hear the Mahatma chuckle indulgently and say, "Have it your way Dude."

Right: Spinning device (called "charkha") used by Mahatma Gandhi to make fabric for his own garments.