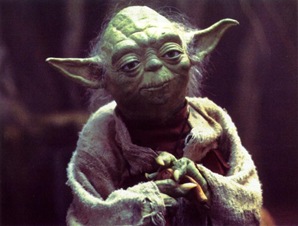 Amongst academic circles, Dudeist theologians, philosophers, and historians have been divided on the question of Yoda’s proper ranking in the pantheon of Great Dudes.

Zen Dudeists hold him in reverence as a Dudeist bodhisattva. Others, who are often derided as a heretical cult by some of the fringe fundamentalist sects within the Brotherhood Shamus, believe that Yoda is a Dudeist demigod who should be venerated as highly as Our Special Lady. Still others affirm him to be history’s first recorded Dude, seeing as how he lived “a long time ago in a galaxy far, far away.” And some skeptics even think that he’s just a muppet with some guy’s hand up his ass. But whatever you choose to believe regarding Yoda Minch, please remember: Just, like, your opinion, man, that is.

What makes a dude? Is it being prepared to do the right thing, whatever the cost? Isn’t that what makes a dude? If it is, than Yoda is a dude par excellence. He didn’t just dabble in pacifism, as Grand Master of the Jedi Council, he was in charge of keeping the galactic peace.

Now some might argue that the armed use of Force would disqualify Yoda as a pacifist and even possibly as a Dude, but we’re not talking about unchecked aggression here, we’re 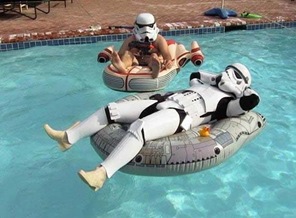 talking about drawing a line in the sand and saying, “This line you do not cross.” Sometimes when dealing with nihilists, fucking fascists, Sith lords, or what have you, you’ve got to use a little Force to get your rug back, so to speak. Yet he who finds himself in a position of such authority must be ever mindful as he does so, lest the dark side warsh over the dude.

As any truly Great Dude must be, Yoda was very calm. Calmer than you are. Possibly calmer than anyone anywhere ever was. Yoda’s admonishment on how Jedi should remain calm in any given situation (“Fear is the path to the dark side. Fear leads to anger. Anger leads to hate, and hate leads to suffering”) is also helpful for those following the Way of the Dude. Dudeists adhere to the same advice but prefer to summarize with the much more succinct “Fuck it.” “Fuck it” and “You can’t be worrying about that shit. Life goes on” are much easier adages to remember when you’ve got too many strands in your old Jedi head. 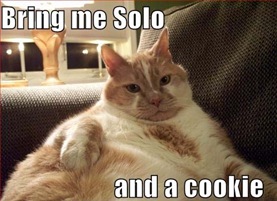 defeat of the Republic and the destruction of the Jedi Order, Yoda was takin’ her easy on Dagobah. Instead offering his expertise to the struggling Rebel Alliance or doing what his parents did, he went into retirement!

Another example of Yoda’s dude-like fallibility is how clueless he could be: He was working in close proximity to Palpatine but somehow couldn?t sense that the dark side was with the future Emperor, let alone that Palpatine was stronger in the Force than he himself was.

Nor did he realize that granting Jedi training to the immaculately conceived Anakin Skywalker was a terrible idea based on bad mathematics. If the Force was being used by hundreds of good guys but only one or two bad guys at any given time, you’d think that helping fulfill a prophecy about a Chosen One who would restore “balance” to the Force would be basically helping the goddamn plane crash into the mountain. And yet that is precisely what he permitted to happen, despite harboring deep reservations about it. 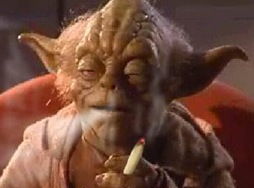 A good general and grand master he may have been, but a private dick he most certainly was not. His career slowed down a little after that.

But we shouldn’t drag this negativity into the discussion. Despite his failings, Yoda was truly one of history’s greatest dudes. His blue, shimmering ghost abides still, takin’ ‘er easy for all us sinners.

I don’t know about you, but comfort in that, I take.