In this column we welcome editor, author, journalist and relaxolutionary Brian Dean. His website Anxietyculture.com really helps takes the edge off. Welcome, dude. Bar’s over there. 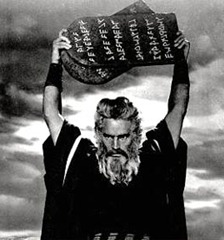 Social Commandment No. 13: Thou shalt not avoid problems or responsibilities

An unfortunate result of this commandment is that by the time we become adults, our avoidance and evasion skills are badly under-developed. When we finally get high blood pressure or ulcers, we need to drop social duties and quit work, but nothing in our upbringing tells us how to make this escape.

A mind that sees “avoiding responsibility” as cowardly and dishonorable will never achieve full relaxation (i.e. letting go of all concerns). It’s impossible to be duty-bound and happy at the same time, which is why those who obey social commandments usually look unsatisfied. 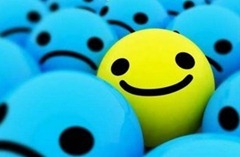 Preoccupation with work, obligations and duties is a potent form of negative self-hypnosis. For example, every time a compulsively house-proud person tidies up, he/she becomes more sensitive to the onset of untidiness. Eventually it becomes a necessary duty to vacuum every thirty minutes, which does nothing but annoy the neighbors.

The ‘required amount’ of work is arbitrarily determined. How often does the car need washing; how much of our work is necessary? More to the point, how little could we get away with? People who talk a lot about duty and responsibility probably never know how much they depress everybody else.

The ‘responsibility’ function of an adult’s brain is to receive the cornucopia of rich sensory impressions from the environment – color, taste, touch, movement, sound – and then translate it all into problems we feel responsible for. We find burdens wherever we look because that’s what we’re educated to do. Social roles such as ‘hard worker’, ‘responsible parent’, ‘devout follower’, etc, merely allow us a choice of burdens to identity with. If we detach ourselves from these burdens, it’s regarded as a moral breakdown.

Minor worries can be postponed indefinitely

The irritation/anxiety reaction to a sudden problem is caused not by the problem itself, but by the thought that we must do something about it (ie that we’re responsible for it). This is a conditioned response which can be reprogrammed with a psychological gimmick. 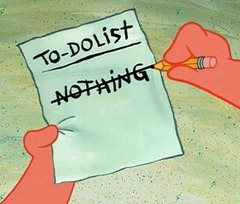 The technique is to do nothing when you notice a problem – or rather, suspend judgment for a few days. Problems often disappear by themselves if they get the chance (especially if they appeared by themselves). In settings tinged with urgency or guilt (e.g. work or family) they don’t usually get the chance.

(If you’re not convinced by this, and you remain attached to solving problems, there’s always the comforting thought that as long as you focus on problems, there’ll be an endless supply of them – which conveniently justifies the need to solve them).

Often the unpleasant effort ‘required’ to solve a problem is just ritualised self-punishment.

The cliché, “never put off until tomorrow..”, can be reversed for people who worry about problems. It’s always better to postpone worrying. An effective postponement device is the ‘worry sheet’, which is a piece of paper for writing down your problem/worry as it occurs – so you can forget it now, and deal with it at some later date. Minor worries can be postponed indefinitely.

Often (and probably subconsciously), the unpleasant effort ‘required’ to solve a problem is just ritualized self-punishment. This results from the dubious belief that we deserve our problems (and thus require punishing). When this notion is replaced with the understanding that you deserve nothing but effortless bliss and happiness, many problems seem to vanish.