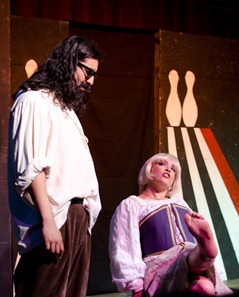 A funny thing happened on the way to The Primitive Screwheads show Sunday night. The Dudely Lama was originally booked to come up to the Bay Area to bless a production of "Much Ado About Lebowski", a theatrical mashup of Shakespeare and the Coen Brothers, by leading a recitation of The Dude’s Prayer. At the last minute His Lamaness had to cancel the trip, so he asked me to stand in for him.

Being of the non-dairy persuasion, I dropped by the local Whole Foods on the way to pick up some soy milk as a contribution to the bar so that I could properly lead the ritual with a White Russian. And then the universe seemed to click into place. Here I was, beginning the evening by shuffling into a grocery store wearing flip-flips and a robe, seeking out the freshest possible container of creamer. As I

selected a box of soymilk, Creedence started playing over the PA system. I finally burst out laughing when I went to pay for it and was greeted by the smiling face of Julianne Moore beaming at me from the cover of Health magazine at the checkstand. I won’t call it fate or what-have-you, but it was a time and a place, and I was in it.

This was my first time leading anybody as a dubious spiritual authority. I was nervous as hell but at least I didn’t flub any of the words and I even got a few laughs during the recitation. 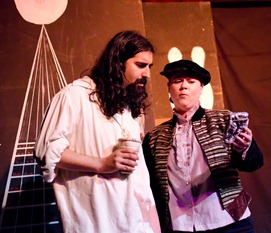 After properly blessing the venue, we all poured in, White Russians in hand. I wasn’t sure what to expect. The program promised bowling balls and rug peeing. San Francisco theater can be, in the parlance of our times, avant-garde. Luckily for the audience, the rug peeing consisted of a rubber tube being yanked from a pseudo-Chinaman’s trousers and shooting water over the first few rows. The Primitive Screwheads’ style is definitely for grownups, but their performance style strikes the right balance between edgy and goofy. The fourth wall doesn’t exist for this troupe, giving viewer the chance to be fully immersed in inflatable beach ball "bowling" and face-to-face with the action. 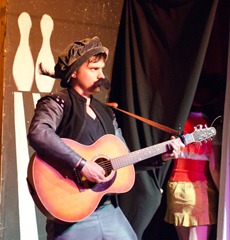 The Primitive Screwheads’ production predates the recently published script for Two Gentlemen of Lebowski, a similar but not identical mashup of The Bard and The Dude. But what both of them reveal is that, when the distraction and delight of so much profanity is stripped away, the Coen Brothers’ dialogue is downright poetical. The comedy of errors that makes up the plot of The Big Lebowski — mistaken identity, bawdy humor, star-crossed lovers and a silver lining to death — is positively Shakespearean. The Dude’s tale flows as smoothly with iambic pentameter as the sunglasses do with poet’s shirts and doublets.

The play was entertaining, but it was the minstrels who stole the show. Faithfully performing live renditions of T Bone Burnett’s carefully curated soundtrack, The Primitive 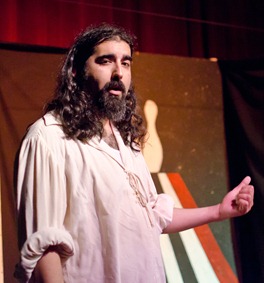 Screwheads’ musical trio sported ridiculously fake mustaches and hammered out hilarious versions of "The Man in Me" and even "I Am a Man of Constant Sorrow" as made famous by The Soggy Bottom Boys in O Brother, Where Art Thou?. The only aspect of the play which did not work was the intrusion of characters from Raising Arizona into the mix, taking over the plot function of the LAPD in The Big Lebowski. Dogberry and Verges from Much Ado About Nothing would likely have worked better, although leaving the plot entirely based on Lebowski would have been better.

Every show at this summer’s repeat performance of Much Ado About Lebowski sold out, and with any luck The Primitive Screwheads will be back next summer for another run. In the meantime, you can catch them in San Francisco "bringing back the blood" with upcoming performances that return to their B horror roots.

Previous Post: Phone’s Ringing Dude: Turn it Off and Force Yourself to Be Where You Are
Next Post: How To Avoid Responsibilities