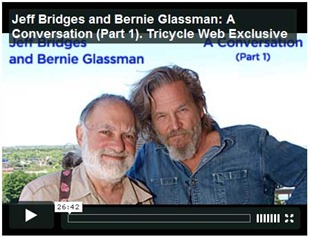 As it turns out, the answer to the Dude’s question is: Yeah, man, it is some kinda Eastern thing.

You want proof? I can get you proof, and with clown noses, too.

Check out this here video interview in the Buddhist journal Tricycle that unfolds between Zen Buddhist Bernie Glassman and his friend Jeff Bridges, our very own Dude extraordinaire.

According to Glassman, who founded Zen Peacemakers and who has a tendency of donning big red clown noses, when he saw Bridges play the Dude in The Big Lebowski, he thought: “There’s a Zen guy.”

Throughout the interview, which lasts about a half hour, Glassman and Bridges also rap together in casual Dudeist fashion about our compeers in Buddhism, social action, girls, cigars, and, um…aw, hell, lost my train of thought.

Oh yeah, lots of other cool stuff, check it out: Bridges’ Buddhist influence on Tron II, Glassman’s idea for establishing Zen Houses that serve the larger community, and how the purpose of life is all about tuning into the energy of real life.

“It feels good to be in tune,” Bridges says.

Fuckin’ A, man. We couldn’t say it better ourselves.

Tune into this interview and take comfort in that.