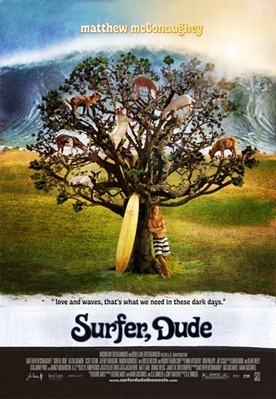 With his laid-back, bohemian reputation, cultivated by his break-out performance in Dazed and Confused (1993), being cast a professional surfer seems like the role of a lifetime for Matthew McConaughey. Surfer, Dude (2008) was a personal, pet project for the actor (in addition to starring, he also produced it) and the film was barely released in theaters and slammed by the critics only to eventually limp out on home video.

After spending six months surfing all over the world in a version of his own Endless Summer, Steve Addington (Matthew McConaughey) returns to his home in Malibu to find out from his manager Jack (Woody Harrelson) that he’s low on funds. Ex-surfer turned corporate magnate Eddie Zarno (Jeffrey Nordling) offers Steve a chance to appear in a virtual reality video game and with other pro surfers on a reality television show. All Steve really cares about is hanging with his friends, getting high and catching the perfect wave. Jack convinces him to give the T.V. show a shot but the surfer ends up turning down Zarno’s deal. Then, the worst thing that can possibly happen to Steve does: the waves on the ocean disappear for weeks on end. In retaliation, Zarno, who owns Steve’s contract, freezes the surfer’s expense account. What will Steve do? 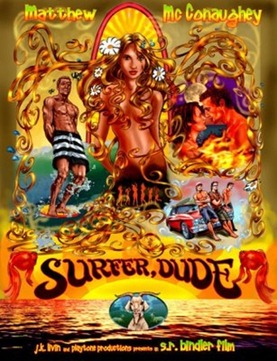 McConaughey, normally in person, talks like a surfer, but in this role he’s trying too hard to talk like one. When he and Woody Harrelson banter back and forth in surfer-speak it feels forced. One gets the feeling that McConaughey wants to do for surfing what Jeff Bridges did for bowling in The Big Lebowski (1998). Also, more surfing footage would’ve been nice. For a film about surfing there is precious little of it. Less generic reggae music would’ve been nice but at least it was not crammed with predictable surf music like “Wipe Out” or “Miserlou.” The screenplay is uneven in parts with clunky dialogue throughout but its heart is in the right place. Surfer, Dude is a critique against the corporatization of surfing. It’s become all about money with surfers becoming a brand when it should be about catching a wave and hanging with your friends. Zarno represents everything that’s about the world of surfing: commercialization and materialism while Steve represents the soulful side – the pure, unfiltered love of doing it. One can appreciate the film’s message it’s just a shame that the execution wasn’t better.