No Frame of Reference #13
Musings from the Arch Dudeship

There’s a lot about life that don’t make a whole lot of sense to me, which is why I guess I take comfort in knowing that the Coen Brothers’ new film, A Serious Man, is out there taking on life’s Big Questions for all us befuddled sinners.

Cathleen Falsani, St. Da Fino’s very own Dudey-satva, recently wrote that the film follows the plight of Larry Gopnick, a “a physics professor and all-around decent fellow whose life falls apart in the course of a few weeks before and after his son’s bar mitzvah.” The plot revolves around “a litany of seemingly minor, but life-altering calumny [that] leads Gopnik (who sees himself as a modern-day Job) to question the existence of God

and the meaning of life — and of suffering.”

Sounds like the film’s not exactly a lightweight, if I understand Falsani’s take on it correctly.

Although I haven’t seen A Serious Man yet (those fucks down at the distributor’s league office have only given it a limited release at the moment), it also sounds as if the Coen Brothers have made yet another movie for its time and place…fits right in there in these increasingly uncertain times.

In the vast, cosmic spectrum of the Coeniverse (as Falsani calls it), that’s where most of us abide, isn’t it? In increasingly uncertain times. Yes, we have the cool example of The Dude in The Big Lebowski on one end of the spectrum, showing us how to abide more or less unruffled through all the strikes and gutters of life’s ontological alleyway. And, yea, brother shamuses and special ladies, on the spectrum’s darker end we have the uncool example of Anton Chigurh, the Anti-Dude, the “true and living prophet of destruction” in No Country for Old Men who lets us see what happens when you just don’t take it easy, man. 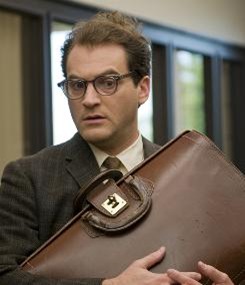 But most of us, I think, are with Larry Gopnik somewhere in between these two extremes, trying to feed the monkey and find a way to abide in a seemingly nihilistic world…a world that has not only gone crazy but tosses metaphysical marmots between your legs every chance it gets.

Take for instance the recent example of when the Arch Dudeship ventured out of the monastery on a pilgrimage to the second night of a Lebowskifest that had rolled into town recently.

After loading the Arch Dudemobile with copies of the “Take It Easy Manifesto”—all of them blessed with holy Kahlua by the Dudely Lama himself—I embarked on a long trek through uptight, rush-hour traffic, which miraculously seemed to part before me like the Red Sea. I even made it to the bowling alley in record time. Verily, dudes, it appeared as though Our Special Lady had smiled on my quest to spread the Dude word. 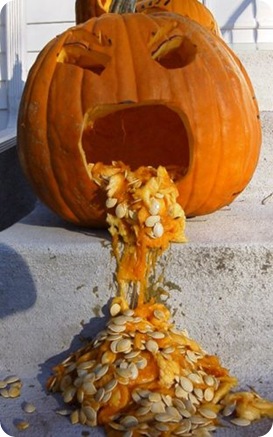 Because there was no equivalent of an In-and-Out Burger in the vicinity, I wandered across the street to a supermarket (not a Ralph’s, unfortunately) to get something to eat. That way, I figured the Arch Dudeship’s belly wouldn’t roll out naked before taking on a sacramental White Russian or three at the Fest.

Well, a wiser fellah than myself should have once said: “Sometimes you eat at a supermarket salad bar, and sometimes the salad bar, well, it eats at you.” Perhaps if someone had said that, I might not have bought that helluva caesar salad wrap that tasted fine at first, but ended up causing severe nausea to warsh over the Arch Dudeship like a rancid fart from a black steer’s tookus on a moonless prairie night.

Eventually, everything came out ok in the end, so to speak, but not before I had to skip the Fest and return to the monastery for a sleepless night of listening to my stomach rumble like a bowling alley during league play. It was a real bummer, man. (For a good write-up on the best time I never had at a Lebowski Fest, check out Tom Risen’s report at BrightestYoungThings.com).

Ok, so while not quite ranking up there with the existential conundrums posed by, say, a cataclysmic tsunami, my ill-timed wave of nausea did cause me to broodingly question: If this is a just universe, why couldn’t I have attended one frickin’ night of a Lebowskifest when every other night reactionary assholes like Glenn Beck are free to fling their verbal 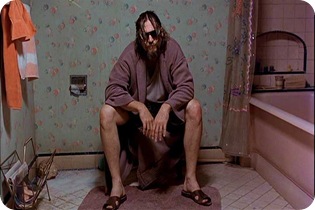 coffee cups at our collective forehead without even a hint of indigestion on their part?

Oh, well. Fuck it. You know me, dudes…I can’t complain. Gotta just slip on the shades of Anatta (that’s the proper nomenclature in Buddhism for “egolessness”) and say, “Life goes on, man, even when it gives you a bad wrap.” You gotta just roll on and avoid stepping in the dukkha.

As Larry Gopnik reminds us, our lives can sometimes resemble the Dude’s bungalow after Jackie Treehorn’s goons trash the place. Fortunately, though, we also have Dudeism to help us tie the room together. I may not have been able to be a part of the offline community of Achievers that night at the Lebowski Fest, but I take comfort in knowing I can always share a few laughs and have a few virtual beers and some burgers right here with Dudeists from around the world at the Dudespaper. 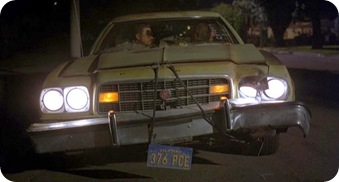 It’s hard to believe that it was only just a little over a year ago (the end of September 2008) that our Gran Torino of a blog began to ramble along the Internet highway. During that time, we’ve had Creedence cranking on the site’s virtual tapedeck, encountered a few textual acid flashbacks in some of its posts, celebrated the tenets of our ethos on it, and sometimes even had a vagrant or two use it as a toilet before moving on.

No matter what strikes and gutters roll your way, the threads you find here really do help tie the room together, man. Whether you’re like Larry Gopnik fretting about the meaning of life or like the Arch Dudeship trying to pass an existential bowling ball through your bowels, the Dudespaper’s a safe place where you can laugh to beat the band and find reassurance that the cosmos really ain’t out to gyp us. As the Editorial We says somewhere here among our business papers, the Dudespaper helps to promote the Dudeist ethos that teaches

the universe wants us to take it easy. Getting all worked up over nothing goes profoundly against the laws of nature, psychology, sociology, bowling and several tropical countries. It’s about finding ways to maintain peace of mind in a world with too many ins-and-outs and strands to keep in your head. And it’s about finding ways to keep your heart light when the bastards are trying to get you down.

Good Lord. You can imagine where it goes from here.