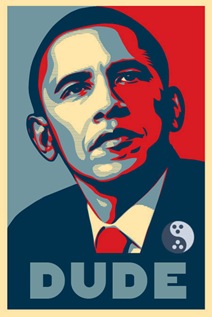 We here at St. Da Fino’s Dudeist Monastery aren’t always the most aware folks when it comes to current events, I admit.

The truth is most of the time we don’t know much of what’s happening in the country, around the world…or even what day it is, for that matter. It’s all a part of the “life’s too short to worry about that shit, man” thing we’ve got going on.

But sometimes there’s an historical event…and I’m talking about the election of Barack Obama here…sometimes there’s an event that, well, defines our time and place. With Obama’s inauguration as America’s first African-American President (using the preferred nomenclature), it seems that, racially, America’s pretty cool. Parts, anyway.

Obama’s election and inauguration show just how far the country’s progressed since the Dude and his generation joined the struggle for racial equality a way back in the 1960s.

I take comfort in that.

But there’s still a lot of room for improvement. The revolution is far from over. Everyone, even us deadbeats, needs to do what we can to make all the blathering about change a reality. That’s why my fellow Brother Shamuses and Special Ladies here at St. Da Fino’s have interrupted our pretty strict regimen of takin’ it easy to send positive vibes out to the new President and his compeers. 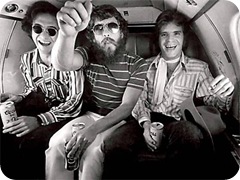 If you’d like to join us in these mind games (in the parlance of Lennonism), here’s how:

Sisters and brothers, if enough of us do this chant together, well, we may not have any direct impact on the new administration, but we’ll all at least be a whole lot more laid back about what they end up doing. If you’re into the whole technology thing, you can also make a pilgrimage to Dudeism’s Virtual Shrine of Our Special Lady and send a prayer to Our Special Lady. 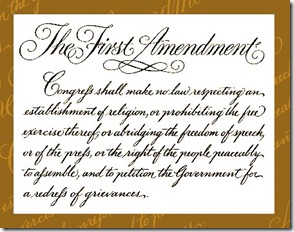 This Is a First Amendment Thing, Man

Now, I hope you all aren’t reading these recommendations of mine as some kind of political endorsement of Obama. Unlike a lot of reactionary churches running around out there today, we at the Church of the Latter-Day Dude refrain from political partisanship. We’ve checked with our accountant and have determined that doing so contravenes a number of league by-laws and might bump us into another tax bracket.

However, contrary to what some may believe, Dudeism is not some sort of apathetic, apolitical worldview. Far from it, Dudes. Following the example of the Dude, we believe we each can play an active, positive role in the greater good.

From saving poor women from being killed to picking up wealthy disabled men that our hot-headed friends may have flung to the floor, we engage everyone regardless of their position in society…limo drivers, bowling alley bartenders, even real reactionaries like Richard Nixon.

It don’t matter to the Dudeist. 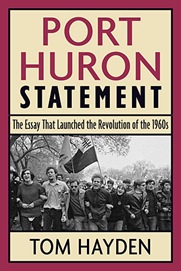 Student for a Dudeist Society

So, while we don’t get uptight about political parties and whatnot, Dudeists are nonetheless involved, active citizens. The Dude himself early on was very involved in political activism. In fact, as the author of the uncompromised first draft of the Port Huron Statement, he pretty much set the tone for the anarchic spirit of the ‘60s. This document was for the rebellion in the 1960s what the Declaration of Independence was for the Revolutionary War.

However, many learned men, including Tom Hayden, dispute the Dude’s authorship of the Statement. Hayden, a founding member of the Students for a Democratic Society (SDS) and responsible for the Statement’s compromised second draft, denies even seeing the Dude in Port Huron back in 1961 when it was drafted. According to Hayden:

In the movie The Big Lebowski, the aging, stoned hippie played by Jeff Bridges announces that he helped write the Port Huron Statement. We don’t remember the "dude" being there…

According to Hayden’s story of the Statement’s origins:

The original idea, conceived at a winter meeting in Ann Arbor in 1961, was modest: to produce an organizing tool for the movement we were trying to spread through SDS. Then the statement became more audacious. The roughly sixty young people who finalized the statement during a week at a United Auto Workers retreat in Port Huron, Michigan, experienced what one could only call an inspirational moment. As the words flowed night and day, we felt we were giving voice to a new generation of rebels. 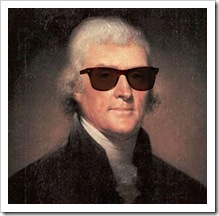 Now, Mr. Hayden, are we going to split hairs here? I’ve read your admirable document and, on a personal level, I’m an enormous fan. But, although the Dude’s version has been lost to history, I can see his obvious influence warshing all over the Statement like kahlua poured into a tumbler of creamer.

Using the deconstructionist methods the Jesus Seminar and Thomas Jefferson have used to determine the New Testament’s historicity, I have reconstructed from Hayden’s version what very well may have been the Dude’s original uncompromised draft. Here are two possible versions of the Dude’s version before Hayden and the 59 other guys got a hold of it.

We have no formulas, no closed theories–but that does not mean values are beyond discussion and tentative determination.

We oppose the depersonalization that reduces human being to the status of things.

We would replace power rooted in possession, privilege, or circumstance by power and uniqueness rooted in love, reflectiveness, reason, and creativity.

In social change or interchange, we find violence to be abhorrent because it requires generally the transformation of the target, be it a human being or a community of people, into a depersonalized object of hate.

People have unrealized potential for self-cultivation, self-direction, self-understanding, and creativity. It is this potential that we regard as crucial and to which we appeal, not to the human potentiality for violence, unreason, and submission to authority. The goal of humanity and society should be human independence: a concern not with image of popularity but with finding a meaning in life that is personally authentic; a quality of mind not compulsively driven by a sense of powerlessness, nor one which unthinkingly adopts status values, nor one which represses all threats to its habits, but one which has full, spontaneous access to present and past experiences, one which easily unites the fragmented parts of personal history, one which openly faces problems which are troubling and unresolved; one with an intuitive awareness of possibilities, an active sense of curiosity, an ability and willingness to learn.

This kind of independence does not mean egotistic individualism–the object is not to have one’s way so much as it is to have a way that is one’s own.

These inspiring words, shamelessly lifted verbatim from Hayden’s version, all have a certain dudeist se qua about them that a young, idealistic, pre-Thai stick Dude could very well have written. But while the sensibilities expressed are certainly Dudeist in spirit, they seem a bit rambling for someone like the Dude, pre- or post-Thai stick usage.

So I read the document again and, after a caffeine-fueled editing frenzy resembling Edward Scissorhands clipping a shrubbery down to size, I came up with the following version: 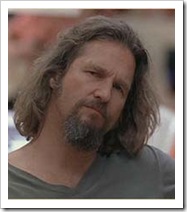 We need not indulge in illusions.

I can imagine a young Dude in ’61 hastily scribbling these words—also found in Hayden’s version—and tossing them to his more ideologically driven compeers on his way out to the Port Huron bowling alley for a game and a pitcher of cheap beer.

After all, even in the midst of a burgeoning revolution, we Dudeists always find a way to just take it easy, man—which is, perhaps, the most revolutionary thing we can do in times that test our laid-back souls.