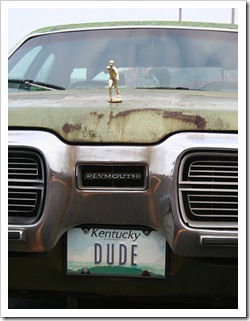 We finally made it! After years of planning to attend the annual Lebowski Fest in Louisville, Kentucky yet always failing to achieve, Liz and I finally made it. If you have no idea what I’m talking about, then I feel it’s my duty to inform you do not have your finger on the pulse of the Lebowski community, and that’s cool. We at Dudespaper are here to let you know about these kinds of things.

Going all the way back to 2002, Lebowski Fest was started by Will Russell and Scott Shuffitt. I could go into all the boring details, but there have already been a million articles written by a million Amateurs and Achievers alike. You’re looking for the good stuff, right? Well for starters, you could always check out our interview with Will and Scott from January 2008 – Episode 13 – Cult Films with Will and Scott. We don’t talk solely about the festivals there, but I think it’ll give you a better idea of who the men are behind the curtain. 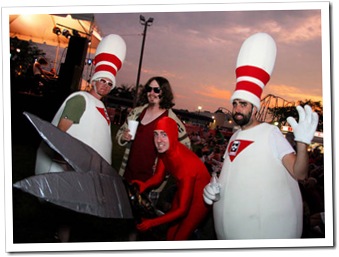 Will and Scott, or “The Founding Dudes” as some call them, are just a couple of average guys; they are really cool dudes. We recorded that episode when they invited us down to the Lebowski Fest World Headquarters about a year and a half ago to hang out on their couch and enjoy the same casual lifestyle The Dude would enjoy. While on said couch, we talked about the culture surrounding the phenomena of cult films and why people would latch on to something like The Big Lebowski. 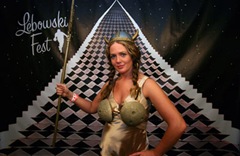 Wait a minute, I was supposed to be talking about the festivals. Right, so Lebowski Fest started out small, but in its eighth year of existence has finally passed the molting stage of puberty and flowered into the Speed of Sound Tour. They’re traveling across the country and visiting 14 cities this year, 15 if you count Los Angeles. Each stop on the tour includes two nights of festivities. The first night is generally the movie party and is held at an appropriate venue with some excellent entertainment. This consists of local bands and sometimes a comedian or speaker with a Dude-friendly message. Sometimes actors from the film even show up. The second night is a bowling party complete with costume and trivia contests, and an all-around good time. 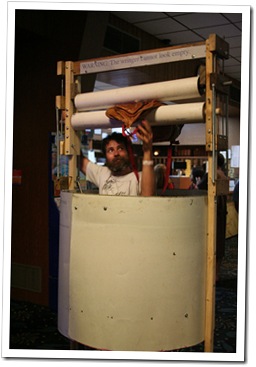 This year Louisville was no exception. We were able to catch two bands, The Black Diamond Heavies and Whistle Peak, at the movie party. Rob Riggle from the The Daily Show made an appearance and told a few stories with that comedic twist that only he can deliver. After the bands and Riggle, Philip “Woo” Moon made an appearance and ceremoniously pissed on a rug before the film started. Now I’m sure you’re wondering if he really peed on that rug, but I’m not in a unique position to either confirm or disconfirm that suspicion.

During the movie, I must admit that I skipped out early with my buddy Tom and bowled a few games. It’s pretty hard to actually get a lane during the second night’s bowling party so we took advantage of the small crowds throwing rocks on the first night. The Executive Strike and Spare, located immediately across the street from the official fest hotel, is also where the movie party was located. This made it easy to get where you needed to be within 5-10 minutes, no matter where you started out. After bowling we were all pretty hungry, so Tom drove us over to get some pizza at Spinelli’s on Baxter (around the indie-friendly Bardstown Road neighborhood). That’s some pretty good pizza and they even deliver until 4 or 5 A.M. 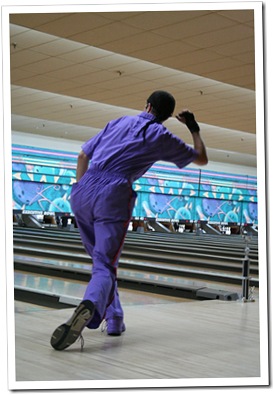 Saturday is great because nothing starts up again until mid-afternoon. This gives everyone plenty of time to sleep in, relax, and just take it easy. Eddie Chung was there again showing his documentary, The Achievers. The film follows a small group of festival attendees who ended up forming a tight-knit group of friends. It contains footage spanning several years and was re-edited since its showing at the 7th Annual Lebowski Fest. I think the edits really tied everything together. The whole film seemed to flow so much better and was much smoother than before. Eddie was a little short-handed so I volunteered to be the bag-man. That means I handled the money and no ringers were involved.

After the film I was pretty exhausted so I decided to skip the Garden Party and take a nap. Unlike most Achievers, I was awake until about 4 AM, but also had to get up at 8 AM to meet with a local professor for an interview. The Garden Party took place in the parking lot of the bowling alley and is kind of a mini-carnival of sorts. Will and Scott have come up with Lebowski-themed games to play like Tossing the Ringer. This consists of sitting inside the Dude-Mobile and flinging a “bag of whites” over the top of the car at a nihilist. Liz and I missed most of these festivities but showed up just in time for the bowling party to start. 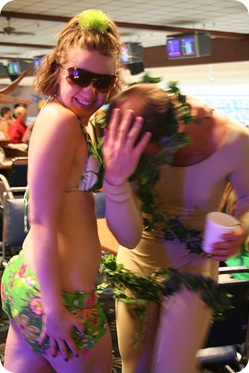 Saturday night is the big day for costumes. You’d be surprised at how creative people can get. You have the obvious get-ups like Dude, Maude, Walter and The Jesus. While some of these look really cool, there are also people who have creatively made a costume based on a phrase in the film, a metaphor, or even a location. One of our favorites was a guy dressed as “A Natural Zesty Enterprise.” He made a wooden model of the starship Enterprise (yes, that’s a Star Trek reference) and substituted some of the parts with pieces of lemon. It was all natural, it was zesty, and it was the Enterprise. Pretty clever if you ask me. Other costumes included Hill 364, no frame of reference, a dog with “papers,” and a ringer for a ringer.

Along with the costumes there is a much fought over trivia title, some great tunes playing in the background, and lots and lots of bowling. I think one of the greatest moments was when The Gypsy King’s version of Hotel California was playing and someone dressed up as The Jesus bowled a strike. It was like a scene right out of the movie. During this time you can also get your picture taken at the prom-esque photo booth complete with an appropriate backdrop. The main difference is instead of Big Ed (the creepy and uncool local photographer from my home town) taking 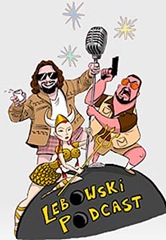 your picture, it was this dude dressed up as a band member from Autobahn, complete with a German accent and a general lack of caring for everything.

If this sounds like a good time, you’re in luck. While the Speed of Sound Tour has already started, there are still plenty of dates left you can attend in Colorado, Texas, the Midwest, and New England. If you’d like to hear an audio version of my review with attendee interviews and commentary, check out Episode 31 of the Lebowski Podcast titled – 8th Annual Lebowski Fest Review.

For more information on Lebowski Fest, I invite you to visit their website – http://lebowskifest.com.