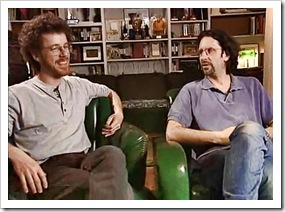 The original The Big Lebowski DVD features a gem of an interview with the Coen Brothers in which they ruminate on the film and joke around about the backstory.

In one of the funniest parts, they talk about an interview they did with “Floor Covering Weekly” about the rug which plays a central part in the film. Just like the rug itself, the interview seemed to have been at the center of an abiding mystery. Watch here (starts at 17:48): 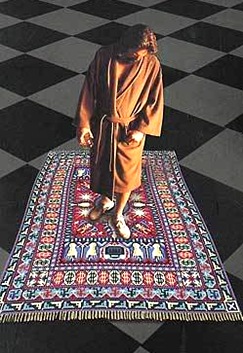 Speculation has since abounded – what happened to the interview? Was it a hoax perpetrated by a zealous fan? Or did the Coens just make the whole thing up? They’ve certainly been keen to play with alternate realities in regards to the Lebowski mythos.

Well, we put detectives on the case down at the lab. Our thinking about the case proved to be limber enough and after contacting them, the friendly folks at Floor Covering Weekly were happy to provide us with the lost innerview.

Far out! Far fucking out!

Sadly, it’s a lot shorter than it might have been had they indulged the normally-laconic Coens’, who claimed in the DVD interview to have nattered on endlessly about the rug.

Still, we’re not going to split hairs here. Not greedy. All the Dudeists ever wanted was their rug interview back!

Garden City, N.Y. – Area rugs are playing some prominent roles in one current movie and one soon-to-be-released motion picture. Rugs are a central plot element in ‘The Big Lebowski,” and they will also be used to help promote “Godzilla,” which is slated to be released Memorial Day weekend.

Updated from the original black-and-white film, Godzilla will appear in area rugs from General Industries with a scheduled rollout date of April 20, according to Tina Koontz, art director. She said licensed products are limited to body part motifs until May 20.

Introduced at Surfaces, the area rugs display Godzilla’s eye with the name printed below. Operations director Steve Marcus used black lighting to show the special effects in the rug, which has a fluorescent glow when viewed under these lights.

In the recently released ‘The Big Lebowski,” Joel and Ethan Coen, the film’s writers/producers/directors, have put an area rug front and center. ‘The genesis for the story was floor covering,” they said . “We had a friend with an area rug who told us it tied the room together. That gave us the idea, so the whole movie started with the rug.”

The story is a case of mistaken identity. Thugs break into the modest home of Jeff “The Dude” Lebowski to recoup money owed to them by his wife, only to find he isn’t the millionaire Jeff Lebowski for whom they are searching. The criminals’ destruction of the rug sparks a series of misadventures, including the unemployed “Dude,” played by actor Jeff Bridges, replenishing his rug with one from the home of his millionaire namesake in Pasadena, Calif.

The set director bought the rug that becomes “destroyed,” while the Persian taken from the Pasadena estate was rented, according to the Coens, who chose a Persian for several reasons.

“It fits the decor of the Pasadena mansion, which is a place less likely for contemporary designs,” they said. “Also, as an oriental design with a bull’s eye/rosette in the middle with the rest of the rug radiating from it, the vibrant red Persian looks out of place in Jeff Bridges’ house.

Previous Post: It’s the End of the World As We Know It. (And We Feel Far Out)
Next Post: Let’s Go Get High Definition