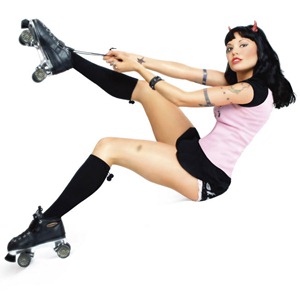 By Rev. Wendy, a.k.a The Dude a-Rides

Every Dude has her game. Some prefer their sports to embody pacifism, while others enjoy taking their emotional problems out in a high speed chase on rollerskates.

Why did this Dude choose roller derby? Well, a sister shamus on my team has promised me fame and chicks! (am I wrong?) No, it was simply the synchronistic discovery of a newly forming team on my island for a sport that connected several strands in my head: wanting some more compeers of the female form, needing an outlet for aggression that simply will not stand in daily life with kids, and a way to keep my mind (and body) limber. My thinking had become way too uptight. It was time to be marvelous.

However, it’s not all flash and dash!

This isn’t ‘Nam, this is DERBY. There are RULES:

In case you are obviously not a golfer and would like to be: Two teams, five women on each. On roller skates. In pack-formation. Padded to the teeth and ready to rumble. 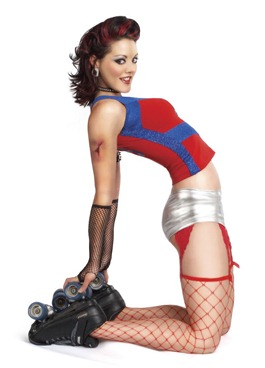 Jammer: Rather than the man in black pajamas, it’s more like a woman wearing a starred panty on her head, but she’s a worthy fuckin’ adversary and you better be ready to give up a toe for this position. The jammer essentially has to loop once around the track and then continue looping, passing members of the other team, each member passed gaining her team a point.

The first jammer to completely loop the track and make her way to the front of the pack is the lead jammer. The jammer is often the Swiss watch of the fuckin team.

Pivot: The pivot draws the line in the sand man, and across that line, you DO NOT…The pivot wears a striped panty on her helmet and keeps the pace of the pack. It is also the pivot’s job to keep an eye on her compeers and yell out when she sees a wringer sneaking through. The pivot is also the last line of defense in keeping the other team’s jammer back.

Blockers: Not exactly lightweights. The 3 blockers use whatever force necessary (and within fair play) to prevent the other team’s jammer from passing through, and to obstruct the intentions of the OTHER blockers to ding up their own jammer. Blockers also have to assist their own jammer through the pack. 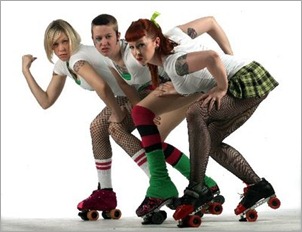 The Refs: REAL fuckin’ reactionaries. In a way they’re like Larry Sellers: You’ve got their homework, but ultimately they’ve got Arthur Digby Sellers in their living room and they can stonewall without cracking. They call you out more than you care to account for; for such paraquat moves as throwing elbows, pushing or tripping opposing skaters, cutting the track or not getting up quickly enough from a fall. BUT it sure is far out when the marmot lands in the other team’s tub – especially if it’s their jammer who’s in the penalty box.

Then you can pretty much take any rug in the house.

Each round robin, or “bout” consists of two 30 minute periods that are made up of many “jams.” Each “jam” is 2 minutes in length unless the lead jammer, satisfied with her score so far (mark it eight) or worried about the other jammer catching up, calls the jam off by motioning at her hips repetitively, with or without joy. 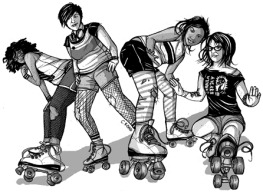 At present, I am what is considered “fresh meat” (term describing newly-recruited 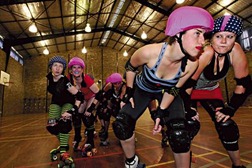 derby girls in training). And we do train hard! My team practices at least twice a week, and by the end of it, I feel like  I’ve taken a knock on the jaw and a bowling ball to the gut. It’s exhausting. (but exhilarating!) My team is quite the motley crew of little achievers, and proud we are of all of us.

Now that I’ve revealed what might well be an unspoken message (for some) of the lure of roller derby, I hope you’ll stay tuned for further updates from this derbying Dude. Meanwhile, I’ll be at practice.